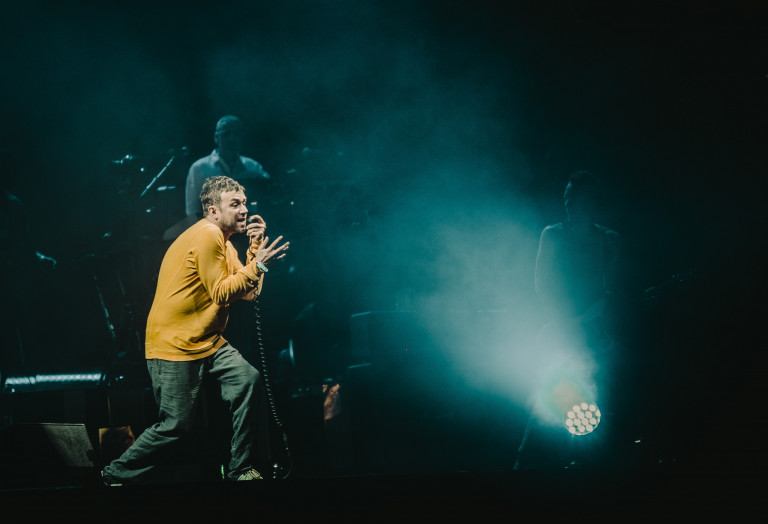 There’s a lot to be said about a festival’s ability to put a summer’s worth of big names into one jam-packed weekend. This year, Lowlands has really rolled out the red carpet and managed to put together a line-up which is considerably stronger than anything in prior years, with ultimate bill-toppers sandwiched between up and coming prospects and some truly old greats. The first day of the Biddinghuizen found its dream headliner in Damon Albarn’s Gorillaz, who closed out their entire European The Now Now tour with a career-spanning set on the Alpha stage. Elsewhere, new prospects Amyl & the Sniffers and BROCKHAMPTON stood out on a day with plenty to talk about.

Australian indie rock outfit Rolling Blackouts Coastal Fever took on the India stage just after lunch with cuts from their highly infectious debut album Hope Downs, a slick collection of sun-kissed indie rock with a dreamy edge. Lead single Talking Straight shone early on, setting the bar high for a set which managed to pack out the tent towards its close. Over on the Bravo stage, Death From Above treated a sparse crowd to an exercise in straight-up nostalgia which more often than not failed to hit the mark than do wonders. If it’s because the Bravo stage was way too big for the Canadian duo remained to be seen, but by the end of their (musically on top form) set it became clear that they’d be best placed in a smaller setting which really allowed the likes of Nomad, Virgin and Trainwreck 1979 to stand out. One band who took great advantage of the small stage gifted to them were Aussie garage rockers and King Gizzard labelmates Amyl & the Sniffers, who caused carnage from the word go. Frontwoman Amy Taylor is a force to be reckoned with, galloping about the stage and taking no prisoners in the process. If these Aussies’ garage punk wasn’t your thing, then you’d probably have found yourself in the Heineken tent for Islington’s very own Little Simz. There something quite special about the London rapper, especially when you consider how far she’s come in such a short period of time. She impressed the Heineken for sure, and it’s unlikely that she’ll ever play a stage as small as this in the next few years. That’s just us, though.

Remember when The Wombats emerged onto the promising indie rock scene all those years ago with the sickly sweet and jumpy Let’s Dance to Joy Division? You do? Great, because the Liverpudlian outfit are still at it and doing a good job of it in the process. New album Beautiful People Will Ruin Your Life isn’t exactly a Joy Division Mark II record, but it still contains the exact essence of what made the fun band so admirable in the first place. Their set on the Alpha mirrored this in blinding fashion, getting some 30,000 revellers up on their feet for the best part of an hour. One band who had no interest in such upbeat behaviour was Protomartyr, the gloomiest of gloomy post-punk bands. Although their set was devoid of any energy, there was enough heart and soul to last for days. Frontman Joe Casey doesn’t do an awful lot when he’s in action, but that doesn’t matter all too much when you consider how hard their songs and subsequent texts hit. If you were to ask someone what the musical definition of Detroit would be, then you’d probably come quite close to a Protomartyr song. London’s Jordan Rakei initially took on a more minimalistic approach to his set on the Heineken stage, but as the minutes passed he built this up to make for a cataclysmic finale and incredibly impressive whole. If only De Jeugd van Tegenwoordig – who rely on cleverly placed nostalgia nowadays – could take a similar approach with their party-starting hip hop. It peaked early on Watskebeurt? and then remained stagnant for some 45 minutes until finding some redemption in their big finale. It’s all extroverted pomp and bombast, which is fun until it becomes a tad too repetitive. At least they had champagne to savour during their greatest hits set. Heard of Lauv? Yeah? Then you’ve stumbled across a good thing, because the American singer-songwriter has an absolute voice to behold with. It does compromise his stage presence at times, but that shouldn’t take away from his sublime ability.

Hype’s are a beautiful thing, just look at BROCKHAMPTON. Do they always last to see greatness, though? Not all the time, but in the case of this California-based hip hop collective you shouldn’t be too surprised if they top bills in ten years time much like Kendrick Lamar does today. All six of the band’s onstage members (out of a total of fourteen) go at it harder than anyone else in the rap game today, setting the bar higher than anyone else did on Lowlands’ first day. Last year’s Saturation album trio saw them rise straight to the top by means of some incredibly slick beats, tight rhymes and overall sense of joy blended in with the harsh realities of life. The set hit its peak on the cataclysmic BOOGIE, a track which managed to bundle a weekend’s worth of energy into three tight minutes, both on and offstage. Unfortunately for The War on Drugs, who followed BROCKHAMPTON, this energy was difficult to track down over the course of their co-headline set. Adam Granduciel and co. are undeniably fantastic musicians, and new album A Deeper Understanding is almost a masterpiece, but something didn’t seem quite right. What it was can be debated for eons, but it comes down to this: bands like The War on Drugs don’t work well on big (semi) open air stages at the start of the night. There’s something about this environment which hindered the band from really going all out, however hard they tried. Shame. At least Bicep got the Heineken crowd going to a pretty frenetic extent.

And then you have Gorillaz. 2017 was a disappointing year for the Damon Albarn-helmed group, despite the fact that they’d released their first full studio album in seven years. Humanz served as the follow-up to 2010’s The Fall, however its over-emphasis on guest stars, sparse beats and minimal emotive impact ensured that the album largely left a sour taste in many a fan’s mouth. It may have spawned a sold-out European tour and plenty of streaming hits (among them album highlight Andromeda), but many saw the record as a step backwards instead of their usual quantum leap forward. Enter The Now Now, the brand new follow-up to Humanz, which came out at the end of June to critical acclaim. It’s an album largely devoid of special guests and Humanz’ hip-hop sheen, both of which have made way for ringleader Damon Albarn and his knack for simple, groovy songwriting. During the group’s greatest hits set at Lowlands – the final show on their EU tour – Albarn allowed for five The Now Now songs to receive live outings, with a mere three Humanz cuts rearing their ugly heads. The highlight of these five new songs was the pensive Magic City, which already sounded like a Gorillaz classic in the making. The rest of the show, which is supported by an enormous live band and larger than life video screen, drew heavily from across the entire Gorillaz world, including set opener M1A1, the infectious Superfast Jellyfish (featuring De La Soul) and classic fan favourites Feel Good Inc., Kids With Guns and Clint Eastwood. Gorillaz were the final band to share their multi-faceted musical talents with the Lowlands Alpha on Friday, serving as the perfect finale to what was an incredibly successful first day. Elsewhere, Belgian outfit Warhaus impressed and rapper Yaeji absolutely tore the house down.