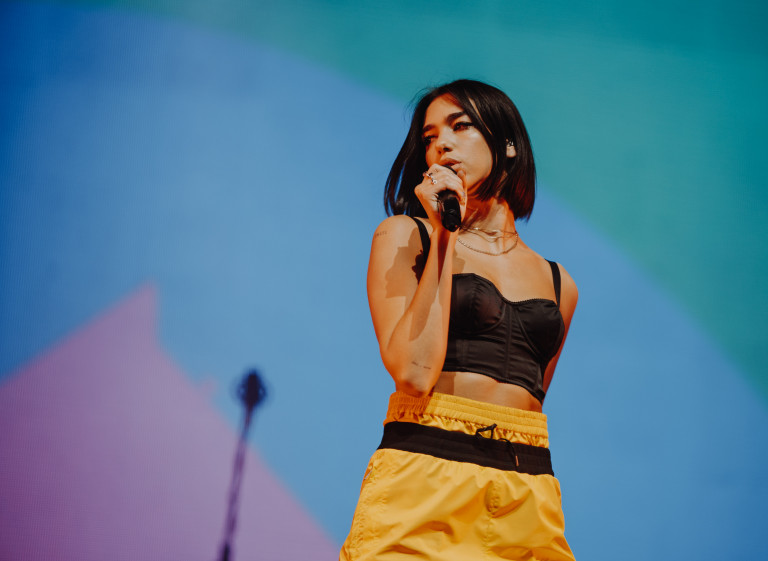 The last festival day can often be the best one for a multitude of reasons: the longing to go wild one last time, the realisation that real life is about to resume, or just that you need one more fix of fantastic live music and everything which comes with it. Luckily, and as per usual, the final day of Lowlands quite literally had it all, from choirs and gripping sludge metal to the modern day king of rap and one woman who might as well call herself the new queen of pop. Jack Parker and Marc Prodanovic were in Biddinghuizen once more to bring you all the best.

What’s better than waking up – hungover – and finding yourself serenaded by ten incredibly talented choir vocalists? Not an awful lot, which is what made The Tallis Scholars the perfect place for many to slowly ease their way into a final day of revelry. The ten-strong British ensemble take on classical vocal pieces with the utmost intricacy, looking beyond the fact that they were at a mainstream pop festival and really delivering goods of the highest quality. They weren’t the only act well-suited to a lazy Sunday morning, though; just take Dutch lyrical genius Spinvis and New Zealand’s very own Marlon Williams as two good examples of the wonders you can work when you centre on intimacy. Didn’t need to ease yourself into the day? Then Thunderpussy was the place to be, with the Seattle quartet delivering a high-octane performance which didn’t stray too far from the classic hard rock path whilst also managing to remain as unpredictable as possible. They didn’t always achieve this, but it still made for quality viewing and listening. The Aussies in Chase Atlantic made a similar impact later on, going on to prove that there’s plenty to get excited about when it comes to the Australian live music scene. Lowlands’ final day, as well as the two prior, found itself loaded with some absolutely great music from down under, the best of which was still to come.

Tom Odell has a love/love relationship with the Netherlands, so it didn’t come as one bit of a surprise to see that he was taking on the coveted mid-afternoon slot on the Bravo stage. This is a point in the day where most hangovers find themselves nursed and visitors slowly but surely work their way back into the routine of checking out bands. This worked in Odell’s favour, treating the crowd to cuts from upcoming new album Jubilee Street alongside the likes of old classics Another Love and Magnetised. It’s nothing revolutionary, but it sure is fun to watch. Belgian outfit Amenra were the total opposite of fun, taking an unsurprisingly serious approach their godly doom metal. They may have faced a sparse crowd for the duration of their set on the India stage, but boy did they impress in the most captivating of fashions. Frontman Colin van Eckhout spent a large part of the show with his back to the crowd, adding to the already high mystique-factor which found his bandmates oftentimes cloaked in a fusion of smoke and strobes. All hail the Church of Ra, and God knows how much we need it. If Amenra was just that little tad too serious for you – or if you just fancied fucking around – then Joost most definitely injected some feel good vibes into Lowlands’ final day. The viral Dutch rapper doesn’t take life all too seriously, something you can palpably sense during his upbeat live set. When it comes to the rap and hip hop on offer in Biddinghuizen, Joost definitely comes close to being one of the weekend’s underrated surprises. The opposite of underrated is overrated, and that’s the only word we’ll use to describe Rag’n’Bone Man.

Wedged in a little corner of the festival site is the Lima stage, where you’ll more often than not find the headliners and party starters of the future. Multi faceted frontman Nic Mauskovic led his Mauskovic Dance Band on a reign of victory just after lunchtime, treating the electric crowd to a set filled with spaced out afro funk, a combination which sounds just as appealing on paper as it is in real life. The set carried so much intrigue that it even pulled two boys to its front row who came to Biddinghuizen all the way from South Africa. When asked why, one of the guys told All Things Loud: “I mean, why not?” Or at least something along those lines. Mauskovic is a well-travelled and multi-skilled musician, and his latest danceable project is ultimately testament to his capabilities. What can’t he do?! Over on the Bravo stage, legendary punk vocalist and lyrical poet Patti Smith strengthened her bond with the Netherlands once again by means of a powerful set which echoed her recent sold-out shows at the Paradiso in Amsterdam. Smith managed to keep the crowd in the palm of her hands, peaking on the captivating Gloria: in Excelsis Deo and memorable Because the Night. It was a show filled with pompous and swagger, much like Confidence Man‘s show over on the X Ray. Only it was a very different blend of pompous and swagger, one lathered in a poppy gloss and one which didn’t hold back in the slightest. The Aussie outfit operate on a sickly sweet indie pop wavelength, one which saw its highlight in memorable set closer Boyfriend. Fellow countrymen DMAs took on the Heineken stage not too long after, just falling short of the mark despite injecting some laddish appeal into the day.

If you needed that little bit of punk energy to kickstart your evening, then there was only place you could possible be: the Alpha, for Dropkick Murphys biggest show on Dutch soil. The American folk punkers don’t hold back, and never cease to impress with their infectious blend of punk, folk and post-hardcore. Set opener Captain Kelly’s Kitchen set the tone for the following hour, one which served as a greatest hits set and reminder that Dropkick Murphys are still an absolute force to be reckoned with. Their upbeat set was a world away from that of Sevdaliza‘s, who treated the India to an irresistible blend of soul, RnB and rap lathered in gallons of groove. The same applied to ZHU, whose DJ set left a lasting impression on the intimate X Ray. Back in the Bravo, $uicideboys left no stone unturned as their gnarly rap made for what was probably the biggest wall of death to grace Biddinghuizen this weekend. The American duo found themselves up against an intriguing Nick Murphy, who appealed to a completely different crowd yet left a similarly impressive imprint on the Heineken stage. This all made way for Dua Lipa, who might as well just take the crown of pop queen home with her. Her live show and stage presence is all round formidable, relying heavily on her radio ready hits and long list of exciting collaborations. Paired with a tight live band and dancers, Dua Lipa served up the perfect pop show, one which will go down in Lowlands history as the start of yet another huge chapter in the London vocalist’s exponentially growing career. Kamaal Williams and Agar Agar subsequently appeared in quick succession on the X Ray and India stages (respectively), doing well in serving up appealing blends of futuristic pop, jazz and RnB.

The highlight of Lowlands’ final day came in the shape of King Gizzard & the Lizard Wizard, a band whose relationship with the Netherlands is so good that they just keep on coming back. After having released five albums in 2017, the band seem to be taking some time off from studio commitments as they spend 2018 touring the world in support of last year’s prolific release schedule. During their headline set in the Bravo they relied greatly on last year’s output, with a mere 4 out of 14 songs coming from before 2017. Early highlight The Lord of Lightning sent the packed tent into an epileptic fit-inducing frenzy, something which is largely down to the tight interplay between all seven band members, most notably between drummer Michael Cavanagh and frontman Stu Mackenzie. Mackenzie is a master of his craft, and it’s an absolute joy to watch as he commandeers his bandmates through unrivalled set highlight Crumbling Castle and its spiritual companion The Fourth Colour. Both tracks are taken from November 2017’s Polygondwanaland, bookending the album with utmost ferocity and vigour. The set came to a close on the visceral trio of Robot Stop, Gamma Knife and People-Vultures, all of which became interconnected just as they are on 2016’s game-changing Nonagon Infinity album. There isn’t much stopping King Gizzard & the Lizard Wizard from being one of the best bands in the world today, and with one or two more studio albums on the way in 2019 you can be sure of seeing them in even bigger tents this time next year. For those who aren’t bothered by Australian psych rock, Kiasmos was the place to be before Lowlands’ final day came to an end by means of two incredibly strong sets.

Both Kendrick Lamar and Zeal & Ardor took on the tough Biddinghuizen crowds at the close of the final festival day, with the former bringing his culturally relevant and musically unrivalled live show to the Alpha in front of the biggest crowd it had seen all weekend. Wherever you looked you’d find practically no place left to stand, and regardless of where you stood you’d never be more than a few feet away from a moshpit or overzealous crowd member. Lamar’s currently touring in support of last year’s impressive DAMN., utilising his time at Lowlands to perform eight of its track. The clear highlight here was hit single HUMBLE., which went down so well that Lamar performed it twice to hype up the crowd. It’s a shame that he relied on SZA collaboration All the Stars to close out the show, because something just didn’t feel quite right about leaving a mellower song till the last. Had Lamar swapped out All the Stars for HUMBLE. he would have probably made an even bigger impact than he already did. There’s no denying that he’s a master of his craft, operating on a totally different level to his counterparts and never failing to do something which people will still be talking about for decades to come. Zeal & Ardor, meanwhile, made a similar yet far darker impact with their unique blend of black metal and blues. Manuel Gagneux is a creative genius, striking a chord with the packed India tent as new album Stranger Fruit took the helm. There’s something strikingly captivating about Gagneux’s ability to fuse two different musical styles which – on paper, at least – could not be further removed from one another. Early highlight Come on Down served as an incredibly impressive moment in the hour-long show, with Gagneux’s raw vocal echoing through the tent with effortless ease, flittering between soulful crooning and guttural screams like it’s no big deal.