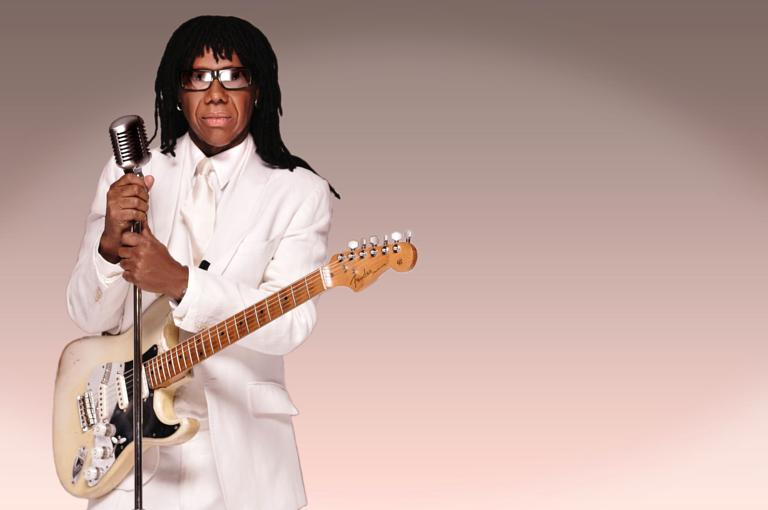 There’s a mere two days left until the first music starts ringing out of the PA at Lowlands Festival this weekend. With some 55,000 revellers set to descend upon Biddinghuizen for yet another sold-out edition, it’s looking like Lowlands’ 26th edition should serve as one of their most exciting and all encapsulating cultural experiences to date (something we say every year, but hey). Today we continue our festival countdown by focussing on one band in particular: Nile Rodgers ft. Chic. The legendary American musician and his collective have been a mainstays in the worlds of funk, soul and disco for decades, with Rodgers’ own unmistakable guitar tone taking him right into the 21st century by means of collaborations with Daft Punk, Avicii and even the ever-unassuming Sam Sparro. That’s not even mentioning his older work with Diana Ross, Steve Winwood, Madonna and David Bowie! Needless to say: Nile Rodgers is a true hitmaker, and chances are that you’ve heard all of his biggest hits at some point in your life. Today our focus lies with these hits, more specifically ten of Rodgers’ most important tracks, both with and without Chic. Give each one a listen and remind yourself why Nile Rodgers is one of the most important guitarists of the last four decades, and then head to the Bravo tent on Saturday evening to catch him in action.

An unavoidable groove steers this Chic classic in the right direction, keeping you on your feet for the entirety of its eight minute run time.

WE ARE FAMILY (SISTER SLEDGE)

Perhaps one of the most unifying songs Nile Rodgers has lent his skills to. Do you hear that classic guitar tone?

This is the track which thrusted Nile Rodgers right back into public consciousness, aiding French duo Daft Punk in their musical rejuvenation alongside Pharrell Williams.

All together now: “Aaahh, freak out!”

There’s something so boutique about Upside Down which makes it perfect for all of the fanciest disco clubs in downtown Brooklyn, at least circa 1980. It must be that bass…

You didn’t see this one coming, did you?

Who’d have though that the success of one of Madonna’s biggest hits lies in the hands of Nile Rodgers?

The One With That Bass Line. The only version of this absolute behemoth which is worth your time is the extended one, as it allows Rodgers and consorts to really groove out in ways only they bewitchingly know how.

SOUP FOR ONE (CHIC)

The track which lent its guitar line to Modjo’s dance hit Lady (Hear Me Tonight), but slower and far more indebted to classic funk than to EDM’s earliest roots.

Perhaps one of David Bowie’s biggest hits, Let’s Dance was left at the behest of Nile Rodgers to assist in turning it into the über-hit it is today.

Catch Chic ft. Nile Rodgers at Lowlands Festival on Saturday, 18 June in the Bravo tent from 18:30-19:45. Listen to This Is: Nile Rodgers below. Chic’s first studio album since 1992, It’s About Time, is due 7 September and features collaborations with Mura Masa and NAO.