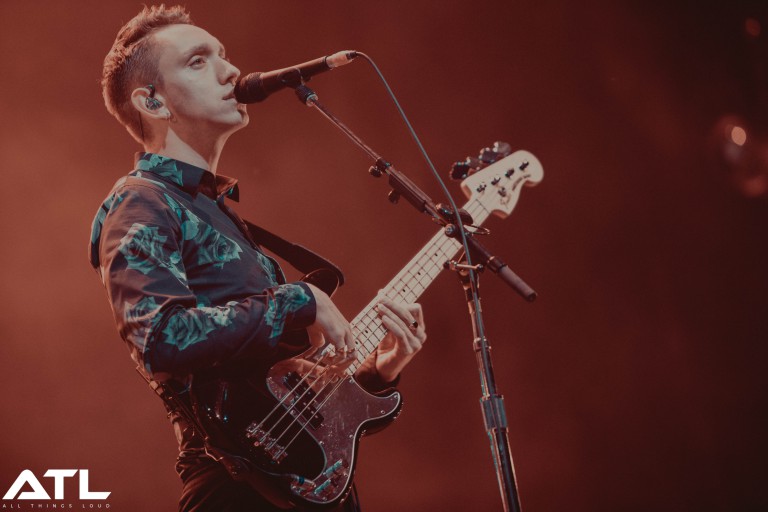 Lowlands Festival turns 25 this year, and they’re certainly celebrating it in style! The Biddinghuizen bash has become a household name amongst seasoned festivalgoers, somehow managing to bring the same crowds back year upon year whilst still breeding a completely new festivalgoer demographic in the process. There’s a good reason why this is the case though, because Lowlands is one of the few Dutch festivals able to mix relevance, cutting edge music and the best of the rest in a way which is no less than attractive for visitors. To mark their anniversary, they’ve thrown around the whole site and changed things up for the better. The famed Alpha stage and its counterpart the Bravo both received major facelifts, with various other bits and pieces making their way into the frame too. On Lowlands 2017’s opening day, the likes of The xx, Nothing But Thieves and Architects stood out. San Francisco skate punkers Culture Abuse had the honour of kicking off the festival, introducing themselves to the India stage by means of a massive middle finger towards current US president Donald Trump. “We’re called Fuck You, Donald Trump” exclaimed the band once they took to the stage, however their set was certainly not as daring or intriguing as this opening missive may have built up towards. Aussie psych poppers Methyl Ethel followed on the same stage after, leaving more of a lasting impression for the packed tent which slowly grew in size as rain poured. Had it not been for the (brief, but fierce) weather, Methyl Ethel probably would not have pulled the crowd they did. Which is a shame, because they seem like a force to be reckoned with in years to come, especially when you consider the success of fellow Aussies Tame Impala and King Gizzard & the Lizard Wizard, both of whom can be heard in Methyl Ethel’s hypnotic tracks. Southend-on-Sea’s Nothing But Thieves were gifted the biggest honour of the day when they opened the renewed Alpha stage in front of some 30,000 eager visitors. The band have become quite a success story of late, much down to their infectious alt rock and pint-sized frontman Conor Mason’s hugely impressive vocal range. New album Broken Machine will see the light of day in a few weeks, with the band taking out some time to premiere a few new cuts during their set. Radio hit Sorry and new single I’m Not Made By Design both featured early on, with the massive Amsterdam featuring and impressing later on. The rest of the set was filled with tracks from the band’s debut album, amongst them Trip Switch, a track which set up the Dutch charts with little effort and maximum impact. This November, the band will take to Amsterdam’s massive AFAS Live for their biggest headline show to date, and it’s a real testament to the hard work and determination Mason and co. put into their careers thus far. World domination, anyone? If only the same could be said for partyboy Sean Paul, who followed up Thieves on the same stage with a set consisting of songs he didn’t actually release himself. If it wasn’t for the occasional “BABYGURL”, these songs really could have been by anyone. Serious.

The first day of Lowlands also had plenty to talk about when it came to the heavier side of alternative music, namely the popular ‘emo’ scene. American trio PVRIS currently find themselves as relative frontrunners in this saturated sonic market, with their set on the India set absolutely justifying the hype which has surrounded Lynn Gunn and co. in the last few years. Set opener You & I instantly set the tone with its pulsating beats, warbled synths and Gunn’s melancholic vocals, before the rest of the set saw the trio draw from upcoming studio album All We Know of Heaven, All We Need of Hell. It wasn’t necessarily a game-changing set, but it definitely did enough to appease the huge amount of fans they drew, most of whom who also remained for the categorically destructive Architects. New album All Our Gods Have Abandoned Us may have been out a while now, but it’s still as relevant today as it was then. Set opener Nihilist instantly caused crowd chaos as the pit erupted from the word go, with frontman Sam Carter on standard top form as he careered around the stage with a menacing look in his eyes. Later on in the set, Carter took time to call out a Class A-asshole who’d groped a crowdsurfing woman, receiving rapturous cheers from the crowd in doing so and once again proving that it’s better to say just one thing than to ignore it altogether. The band, who lost guitarist Tom Searle to cancer last year, were on top form once again and it looks like there won’t be any stopping them as they power on as the leading band in modern metal. Mura Masa caused similar crowd frenzies over on the Bravo stage, however these were more representative of euphoria than they were of anger. The euphoria stretched out all across the festival site, reaching the Heineken just in time for Mac DeMarco’s happy-go-lucky indie pop cuts. DeMarco emerged onstage carrying his show announcer, hitting home the goofiness from the opening seconds. He decided to drop fan favourite Salad Days early on into the set, embracing his slacker attitude as he introduced his equally-wacky band members. It was one of the strongest sets of the day, even if DeMarco looked and acted as though he couldn’t care less about his whereabouts.

The day came to an end by means of two highly anticipated sets, the first of those being The xx’s long awaited promotion to headliner status. New album I See You put them on this pedestal, enabling them not only to up their live game in front of bigger audiences, but to also put on a proper show. Their headline set last night may not have featured the mirrored floors they travelled around Europe with earlier this year, but what they lacked in production they made up for in class and elegance. Opening couplet Intro and Crystallised sent fans into a nostalgic mood from the off, with new cuts dropped in every now and then for good measure. I See You isn’t their strongest record to date, but live it certainly comes across far better than you’d initially expect from the introverted three-piece. Ty Segall, who topped the India stage billing at the same time, took on a crowd whose ability to really get stuck in took a while to appear. Once it did, though, Segall absorbed the energy and ensured that the first day of Lowlands’ 25th anniversary came to a strong end.

Lowlands Festival continues today with sets by Editors, Alt-J and Frank Carter & the Rattlesnakes. Check out more shots of Lowlands 2017 below.