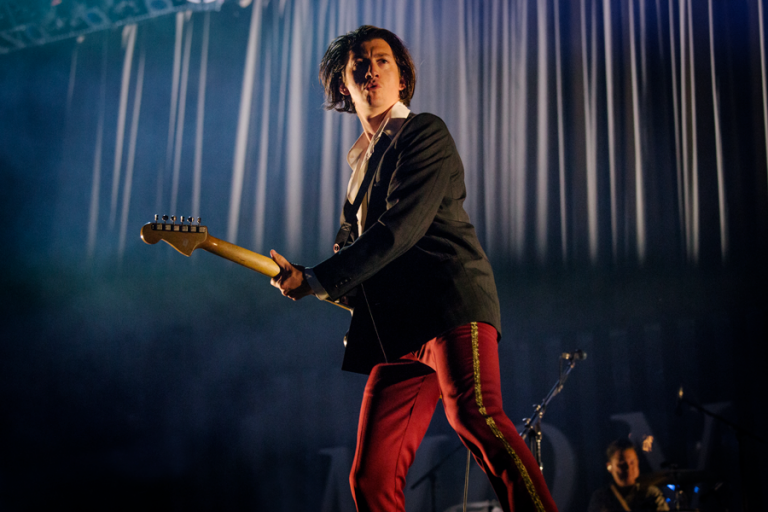 If you thought that the first day of Mad Cool Festival‘s larger than life 2018 edition was one to write home about, then wait until you see what the Madrid bash had to offer on its simmering second day. Topping the bill, the festival struck gold with an appearance by Arctic Monkeys, who are currently undertaking an ongoing victory lap in support of intimate new album Tranquility Base Hotel + Casino. Joining them near the summit of the bill was Jack White, the anthem producing mad scientist whose live show is as schizophrenic and frantic as you’d expect. Jack Parker and Mitchell Giebels are in Madrid to bring you the best of Mad Cool 2018.

Demure indie folk singer songwriter Kevin Morby kicked off proceedings on the Mad Cool Stage just before 6:30pm, utilising his spot in the sun to treat the sparse crowd to cuts from last year’s captivating City Music . It’s a collection of densely packed, elegant tracks which border on the edge of grandeur whilst still sounding more intimate than anything Morby had done prior. Live, the musician managed to do selected cuts from the album total justice, even if it was merely the first show on his European tour. This didn’t matter all too much, because Kevin Morby is a born and bred artist, even poking fun at Arctic Monkeys’ enormous backdrop by dubbing his band The Monkeys. Over on the KOKO Stage, another batch of indie folk found itself echoing through the PA as Real Estate took to the stage. Despite having put out a critically acclaimed new album in the form of last year’s In Mind, the band couldn’t escape the feeling of sounding like something merely there to fill up the time. It’s a shame, because on record the emotion is palpable; it’s unfortunate that this didn’t translate to the stage. One act who did manage to bring everything they had to the stage with effortless ease was New York duo Sofi Tukker, who – despite initial technical difficulties – set The Loop on metaphorical fire with their infectious, party-ready house and EDM. It’s all laced with a hefty dose of Latin influence, something which is found particularly in the rhythmic and percussive elements of Sofi Tukker’s music. Away from the music itself, it also became evident early on that the duo (Sophie Hawley-Weld and Tucker Halpern) were well versed in their performance techniques, entertaining the crowd from the word go and ensuring that not a single soul remained motionless. Did they succeed? Absolutely, and not only did they succeed, but they also brought the biggest party of the day so far to Madrid.

Another band who got the crowd all worked up from the off were At the Drive-In, although as you’d expect this was a method of crowd engagement far removed from Sofi Tukker’s slick EDM. The Texans are one of the rowdiest acts out there right now, and last year’s in ter a lia served as a prime example of Cedric Bixler-Zavala and co.’s ability to remain musically forward thinking without having to rely all too much on their early 2000s hits. Still, though, it proved to be the older cuts which – predictably – garnered the wildest responses. Set opener Arcarsenal saw frontman Cedric launch his shakers and mic stand at the video screen behind them before the song had even started, before subsequently going apeshit on stage as he only just managed to contain himself during the track’s frantic verses. Newer cuts Governed by Contagions and Hostage Stamps stood out throughout the set, with the hour-long missive culminating in a frenetic rendition of the infectious One Armed Scissor. This is where we find Cedric at his wildest, most captivating: as a frontman who leaves no stone unturned and takes no prisoners. Some bands fall victim to becoming nostalgia acts, but At the Drive-In anno 2018 are far from it. Over on the KOKO Stage, James Bay presented Madrid with cuts from new album Electric Light, a record which is both aesthetically and musically a world away from his clichéd singer-songwriter beginnings. Set opener Pink Lemonade served as a prime example of this, allowing for Bay to exercise his right to rock the fuck out and kick down the door on the second chapter of his still-promising career.

Speaking of promising, how about some Marmozets? The Yorkshire quintet have two absolutely solid studio albums to their name, the second of which (Knowing What You Know Now) came out earlier this year to wild acclaim throughout the rock and metal world. The new album’s success has resulted in a relentless touring schedule, one which saw them take on Mad Cool’s Radio Station stage in front of a packed, energetic and willing crowd. At times they may have been a bit too willing for security’s liking, though; in particular during set closer Major System Error and frontwoman Becca’s command for the crowd to get on one another’s shoulders. It was a move which irritated the hell out of all six security guards, but one which only went on the strengthen the band’s tight connection with the baying crowds. Set opener Play demonstrated this initially, with the likes of new cuts Like a Battery and Suffocation also coming across incredibly well. There’s not a lot stopping Marmozets from becoming one of the world’s biggest bands, so surely it’s only a matter of time? Snow Patrol were the next big name to take on Mad Cool’s main stage, doing so with effortless ease and minimum impact. Sure, the Northern Irish band are one of the biggest around right now, but on an open air stage cuts from new album Wildness just don’t come across all that well. All filler, no killer. Over on the KOKO Stage, incendiary singer songwriter Ben Howard presented a packed field with tracks from new album Every Kingdom, succeeding in bringing its intimacy to the open stage with little difficulty, particularly on the sprawling and captivating A Boat to An Island On the Wall, by far the strongest track on Every Kingdom.

At the same time, popstar-in-the-making Jain took on the Radio Station stage with effortless ease as she presented yet another packed field (crowds at Mad Cool are brilliant) with her futuristic live show. Jain’s international background whilst growing up has enabled her to incorporate a multitude of multicultural sonic influences into her music, something which came to life early on with the Indian-flecked On My Way and continued on the African-tinged Come (taken from 2016’s Zanaka). The set peaked on a sizzling Alright, which is a sickly sweet slice of perfect pop. Jain is a megastar in the making, and if her Mad Cool set was anything to go by then this shouldn’t be too far from the truth. Mad scientist Jack White took on the Madrid te Abraza Stage later on in the evening, presenting a ram-packed crowd with cuts from his divisive new album Boarding House Reach. It’s an album filled with experimental elements and frenetic sonic outbursts, both of which combined to present a new side to White’s visceral career thus far. Over the course of his ninety minute set, he also found time to pull some older hits out of the bag, including reimagined versions of The Raconteurs’ Steady As She Goes and ultimate festival anthem Seven Nation Army, which served as the outright highlight of White’s whole set. You can say what you like about Jack White’s stances on certain topics, but you can’t deny that he puts on one hell of a show.

Arctic Monkeys had the honour of closing out the Mad Cool Stage just before midnight, doing what they do best in a way only they know how. New album Tranquility Base Hotel + Casino may have been an incredibly divisive record among fans and critics alike, but there’s no denying that it’s an impeccable piece of work which sets the bar very high for future releases from the Sheffield quartet. It’s an album which thrusts Alex Turner the Showman all the way to the forefront, a position which the frontman all but laps up. Set opener Four Out of Five is the new album’s makeshift lead single, utilising a fuzzy melody and gallons upon gallons of sonic grandeur, both of which combine to produce a track which is just as much classic Arctic Monkeys as it is game changing. It served as the perfect start to a whirlwind ninety minutes for the band, further playing four more new songs (One Point Perspective, Bat Phone, Star Treatment and the elusive title track) alongside a whole host of their most exciting hits. There was something for everyone, whether you were a fan of their early stuff (From the Ritz to the Rubble, I Bet You Look Good on the Dancefloor), their mid-career slump (anything from Humbug) or AM’s slick rock and roll (Do I Wanna Know?, Why’d You Only Call Me When You’re High). Arctic Monkeys are born entertainers, and by the time R U Mine? rang out of the PA at the show’s close this couldn’t have been any more apparent than it already was. Franz Ferdinand closed out the second day of Mad Cool on the Madrid te Abraza Stage, making for an indie rock paradise right on the back of Arctic Monkeys. New album Always Ascending is a step in the disco-slash-funk direction, and it’s a very solid one at that. Title track Always Ascending made for a ton of energy both on and offstage, finding itself sandwiched between old hits Do You Want To?, The Dark of the Matinée and No You Girls. The bulk of the band’s eighty minute set may have focussed on new music, but there was also plenty of space reserved for the band’s expansive back catalogue, including an absolutely spectacular rendition of smash hit Take Me Out, a track which (much like Seven Nation Army) never fails to impress. As day-enders go, Franz Ferdinand are definitely up there with the best of them.