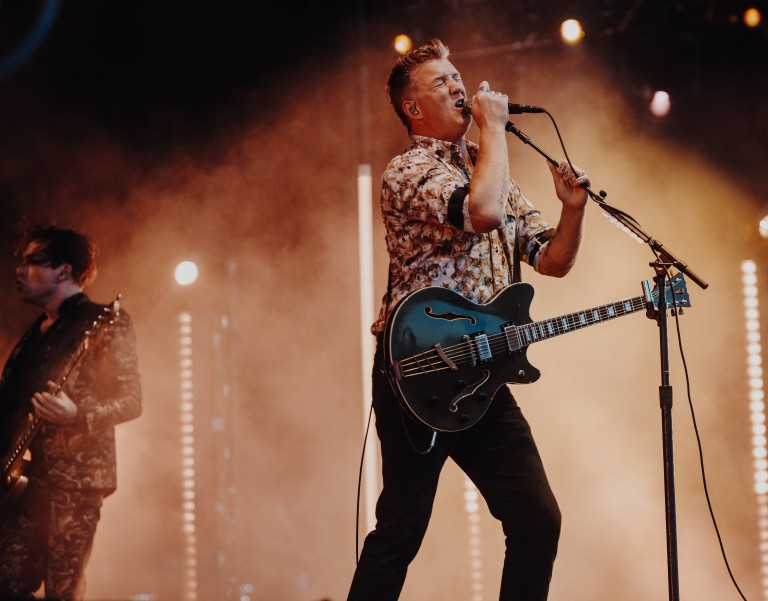 It’s not often that one band possesses the power and panache to run an entire festival. But then again, it’s also not every day that you have Queens of the Stone Age’s Josh Homme commandeering not only the crowd and his band, but also the security. In typical Homme fashion, he managed to rile up the crowd to a point where security intervention led to Homme himself calling the shots. It made for entertaining viewing, and further served as a highlight on the final day of an incredibly successful third edition of Mad Cool Festival. Jack Parker and Mitchell Giebels were once again in Madrid.

As festival billings go, Mad Cool’s final day found itself more jam-packed than ever before, with a total of three headliners (Queens of the Stone Age, Depeche Mode and Nine Inch Nails) standing strong alongside an incredibly powerful undercard. So strong that every field, tent or confined space found itself packed to the rafters not only with festivalgoers finding something to do, but with people who were genuinely passionate about the performances in front of them. That’s something which has made Mad Cool such a well respected festival within the European scene, because it’s not often that you find crowds invested in performances as much as they are in Madrid, regardless of who was on stage or how good or bad it was. American outfit Pile kicked off proceedings on the Radio Station Stage, entrancing the crowd with their gritty grunge-meets-post punk. They come across as a relatively unassuming band on paper, but live their music really comes to life, in particular on the sprawling Texas. Over on the Madrid te Abraza Stage, London’s Wolf Alice powered on through in front of a near-full field as they treated the crowd to cuts from last year’s hazy Visions of a Life. Ellie Rowsell and co.’s sophomore album is a world away from the youthful indie rock of their 2015 debut My Love is Cool, but it still maintains that essence of sounding like classic Wolf Alice. Even though the new songs had some difficulty making the desired impact on an open air stage, there was no denying that Wolf Alice managed to put on a brilliant set which highlighted all of the quartet’s strong points. New Yorker LP took on the KOKO Stage around the same time, with her voice absolutely soaring over the crowd as she kept them in the palm of her hand for the duration of her hour-long set. There’s not much holding LP (real name Laura Pergolizzi) back from becoming one of the bigger names in indie rock, and it’s only a matter of time before she becomes a household name.

One artist who doesn’t have to worry about establishing himself as a household name is Jack Johnson, the Hawaiian singer-songwriter who never fails to put a smile on people’s faces. There’s something very special about Johnson’s ability to create so much impact while utilising so much simplicity, particularly on a sonic front. It doesn’t take a lot for him to create a simple, happy-go-lucky pop song which has all the hallmarks of a perfect festival anthem, which is absolute testament to his incredible ability. Continuing the sweet indie trend over on the Radio Station Stage was Frankie Cosmos, whose new album Vessel has served as one of Sub Pop’s finest 2018 releases. It’s an extended collection of sickly sweet indie pop, and one which delighted a near-packed crowd as the festival slowly headed towards experiencing its final sunset. Norfolk’s Deaf Havana took on the Thunder Bitch tent not too long after, presenting a sparse crowd with cuts from upcoming new album Rituals. It’s a shame that James Veck-Gilodi pulled such a sparse crowd, because musically Deaf Havana’s set was tight, catchy and most definitely something which you could put on big stages the world over. The reason behind a lack of audience for Deaf Havana is most likely down to the first of three consecutive headliners on Mad Cool’s final day: the ever-jarring Queens of the Stone Age. New album Villains is a fantastic missive, and one which has once again enabled the outfit to maintain their status as world-beating festival headliners. Kicking off on the groove-infused If I Had a Tail, Josh Homme and his consorts ensured that not a single soul stood still for the duration of their 75 minute set, swiftly setting the gears into motion on the frenetic My God is the Sun and haunting Feet Don’t Fail Me. As show openers go, this one was pretty special. The rest of the set wasn’t without its controversies, though, as Homme interrupted No One Knows to direct his frustrations towards the security who refused fans entry into a VIP section down the front. Later, following a stern demand to let them in, Homme also told the security to “be nice or be gone“, a comment made in lieu of some intense manhandling from security guards along the barrier (an unfortunate reoccurrence throughout the weekend, just take Marmozets’ set a day prior as an example of this). It was from this point onwards that the set only went from strength to strength, hitting an emotionally intense peak on newer cut The Evil Has Landed, before launching into a barrage of straight-up bangers: Make it Wit Chu, Little Sister, Go With the Flow and encapsulating set closer A Song For the Dead. If you thought that Queens of the Stone Age’s show opening was powerful, then its finale was twice as fierce. Josh Homme and co. take no prisoners to this day, proving that they always have and always will be an incendiary live force to be reckoned with.

Over on the Madrid te Abraza Stage, Depeche Mode served as the night’s second of three consecutive headline shots. The seminal electronic outfit have stood the test of time and battled death and addiction to stand tall anno 2018, and it’s safe to say that everything which came before has only made them stronger. Dave Gahan remains one of music’s most hypnotising and memorable frontmen, commandeering with the crowd with minimal difficulty and maximum impact as he ensured that their headline set became one to remember. Over the course of roughly ninety minutes, the outfit took on cuts from throughout their expansive back catalogue, one which spans decades and hit after hit after hit. Set opener Going Backwards – taken from last year’s Spirit – set the demure tone for the rest of the set, signalling the start of a sonic walhalla which would go on to entrance some 70,000 fans in attendance. The band’s newer songs may be incredibly solid, but it’s still the older hits which have the biggest pulling power. A closing one-two of Enjoy the Silence and Just Can’t Get Enough well and truly hammered this home, with the manic Gahan parading around stage like a frenzied maniac on a mission. He’s been through a lot over the course of his career, and you can tell that it’s only made him and his band stronger. Depeche Mode’s set at Mad Cool Festival drew one of the weekend’s biggest crowds, and one brief glimpse of what went in to putting on such a visual-heavy show should tell you enough. Portugal. The Man are another band who relied heavily on visuals during their set on the Radio Station Stage, allowing for a ton of self-deprecation as Beavis & Butthead belittled them during a cleverly constructed intro video centred on the band’s unexpected smash hit Feel it Still. “Bow down to the greatest band in the world, Portugal. The Man” bellowed Butthead with Beavis describing them as “Better than the Beatles, The Rolling Stones and Silverchair, but not as good as Pantera“. The pinch of salt added to the Alaskan band’s sense of self-deprecation makes them an intriguing act to watch, even more so when they kicked straight into a cover of Metallica’s For Whom the Bell Tolls, allowing it to segue straight into fan favourite Purple Yellow Red and Blue. Unfortunately, this is as far as the bar would find itself set until the aforementioned Feel it Still kicked into gear and sent the crowd wild. Portugal. The Man are a brilliant live band, but sometimes they lack the ability to craft a balance between killer and filler. Shame.

Whilst Depeche Mode were busy entertaining a large chunk of Mad Cool’s attendees, it was up to both Black Rebel Motorcycle Club and Rival Sons to fill the much needed rock music gap for baying fans. The former took the KOKO Stage on a trip through grisly, demure post-rock, whereas the latter injected a hefty dose of balls-out rock’n’roll into the Radio Station Stage crowd. There’s little crossover between the type of audience attracted by each band, but you could definitely sense that there were plenty of people who hurriedly flittered between both solid performances whilst also trying to catch a glimpse of Depeche Mode. The same trend would find itself repeated one slot later, with the always-captivating Future Islands up against the energetic and utmost enjoyable Friendly Fires and final headliners Nine Inch Nails. The Trent Reznor-fronted project had the honour of serving as Mad Cool’s third of three final day headliners, doing so in jarring fashion with a live show which messed with your head just as much as it messed with your eyesight. It ain’t pretty being an epileptic Nine Inch Nails fan, so much so that their 2018 production should come with a very prominent warning. Set opener Somewhat Damaged set the gears into motion as Reznor intensely careered his way through the track, before pummelling through a barrage of noise which bordered on the frantic. This is exactly what you’d expect from a Nine Inch Nails show, with standard finale Hurt sending a majority of festivalgoers away satisfied. If they’d have remained satisfied at the sight of pop superstar Dua Lipa remained to be seen, but one thing was evident: Lipa is one more hit track away from being the biggest modern popstar in the world. Not only does she have killer tunes, but she also knows how to place them in and amongst a visual and dance-heavy live show without allowing for any of the bells and whistles to compromise her immense vocal ability. Set opener Blow Your Mind (Mwah) set the tone instantly, allowing for absolutely incredible scenes as the packed field went mad to her neo-pop hits. There’s too many to name on just one or two hands, and if she continues on like this then there really will be no stopping Dua Lipa. Her performance signalled the end of Mad Cool Festival 2018 for many, with the general consensus being that it was the most successful of the festival’s three editions to date. Sure, there may have been some teething issues (broken pin machines, long queues), but that’s what you come to expect when a festival moves to a brand new location. Mad Cool Festival successfully lived up to the incredibly high expectations set by fans and critics, with only one question now on everyone’s minds: how will they top this in 2019? Tough one.