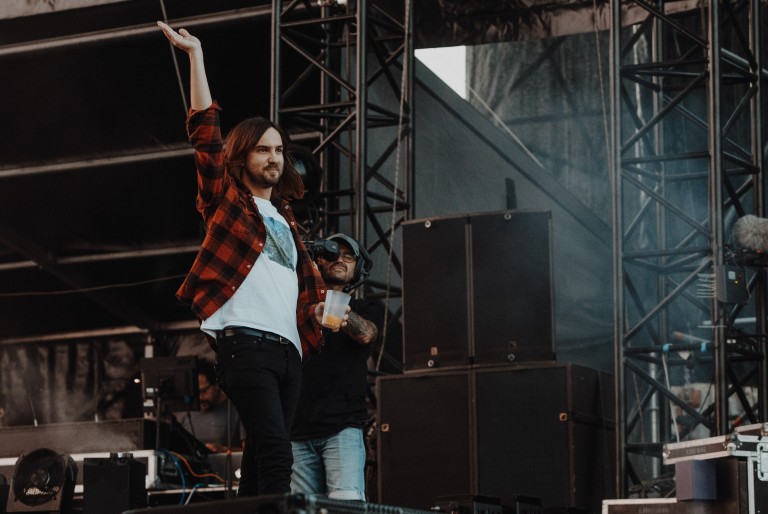 Mad Cool Festival is back, and most definitely in style. Following a tumultuous and tragic 2017 edition, the Madrid bash bounced back from near certain disaster to present the world with what is undoubtedly one of the strongest festival line-ups to date. Topping the bill on the festival’s first day was the absolutely monstrous heavyweight that is Pearl Jam, with the rest of the 50+ strong line-up featuring triumphant comebacks (Tame Impala), pounding DJ sets (Justice) and the rowdiest hellraisers (Slaves, FIDLAR).

It was up to Kent duo Slaves to kick the day off, doing so in a way only they know how. With Laurie Vincent on guitars/vocals and Isaac Holman on percussion, Slaves managed to stir up a mini frenzy in the basking heat as they kicked off proceedings on the Mad Cool Stage (the festival’s main stage). What the duo lack in creativity they most certainly make up for in energy and pizzaz, pulling a handful of old favourites out of the bag alongside cuts from upcoming new album Acts of Fear and Love. Look, let’s be honest here: there is little about Slaves anno 2018 which is musically groundbreaking or forward thinking, but it really doesn’t matter. Slaves are the kind of band made for big festival stages, leaving no stone unturned wherever they go. Over on the Madrid te Abraza Stage (a second main stage of sorts), California’s Eels treated the crowd to an early nostalgia trip through the outfit’s expansive history, throwing in cuts from new album The Deconstruction along the way. A notable highlight came early on in the form of Bone Dry, which saw frontman E engage in some synchronised dance moves with guitarist The Chet. Eels came at just the right time for Mad Cool’s sweltered revellers, hitting the stage moments after Slaves’ rowdy noise sent them into heatstroke-like conditions. Fleet Foxes made for an additional dose of slick and intricate indie folk back on the Mad Cool Stage, sending baying crowds into the evening with demure and sprawling songs from last year’s Crack-Up, among them the intense and dreamy Fool’s Errand. The large Mad Cool Stage may have been a step too far, though, with some of Robin Pecknold and co.’s cuts finding themselves lost in the distracted masses.

One band who had absolutely no concern when it came to capturing the crowd’s attention were FIDLAR. The Californians have now come to that point where they need little introduction, and this became apparent from the moment they took to the stage. Limbs flew from left to right as the crowd went absolutely batshit crazy to the quartet’s raucous skate punk, resulting in the first sign of proper carnage at Mad Cool this year. The band even found time to play some new music, with the fuzzed out and gritty Alcohol kicking off the show in mental fashion. It was another statement of vicious intent from the band, setting the bar high for the rest of the show as they sent the Radio Station Stage into a frenzy. Old favourites No Waves, West Coast and Cocaine all featured, proving to be the perfect ingredients for a festival set as memorable as FIDLAR’s. Over on the Madrid te Abraza Stage, Tame Impala served as the band who most festivalgoers undoubtedly had been looking forward to the most. It’s been quite some time since Kevin Parker and consorts made themselves heard, having last performed a live show in July 2017 (one of only a handful they played last year). Their set at Mad Cool served as the Australians’ big comeback, and all signs pointed towards it being just as magical as you could hope. Was it, though? In short: yes, absolutely. Brief set opener Nangs led into a cathartic rendition of the magistral Let it Happen, a seven-minute disco psych epic which bears all the hallmarks of a festival classic. From hypnotic synths and fuzzed out guitars through to a spellbinding ending complete with colourful confetti, Tame Impala made for what was already the moment of Mad Cool 2018 so far. The set continued reaching equally memorable heights throughout, particularly on fan favourites Mind Mischief, Elephant, The Less I Know the Better and proggy epic Apocalypse Dreams. All four tracks formed an integral part of Tame Impala’s visual-heavy live show, one which grabbed the audience by the throat and didn’t let go until the final notes New Person, Same Old Mistakes rang out. As live comebacks go, you could suggest that Tame Impala’s grand return is up there with some of the best. They’re only playing a small handful of shows this summer, including an appearance at Citadel Festival in London this weekend. If their Mad Cool show is anything to go by, then it will be nothing short of memorable.

Over on the aptly titled Thunder Bitch Stage, it was up to UK quartet Airways to entertain the small crowd of people who didn’t quite fancy a bit of Tame Impala. As a late addition to the line-up (the band replaced Milk Teeth this week), Jake Daniels and co. had quite the tough task, conquering it with effortless ease as they treated the crowd to the likes of recent singles One Foot and Reckless Tongue. Both tracks are prime examples of why there’s a definite future for the quartet, even if they had a bit of difficulty pulling a substantial crowd. Given the fact that they clashed with Tame Impala, though, you could definitely suggest that every band would have difficulty with this. Nonetheless, they pulled it off well and ensured that those who were there would go home with positive opinions. In and amongst the Tame Impala-led chaos, American outfit Yo La Tengo also had difficulty pulling a substantial audience as they treated the KOKO Stage to cuts from new album There’s a Riot Going On. It wasn’t exactly a spectacular performance, but it was good enough to allow for them to maintain a decent crowd. All of this made way for the night’s big headliner, Pearl Jam. Eddie Vedder and co. are currently embarking on a victorious trek across the UK and mainland Europe, pulling off night after night of stellar performances as they gear up to tease a purported brand new studio album. There’s no word on the ifs and whens surrounding it just yet, but that isn’t necessary when your back catalogue is so strong that it packs out a full field for upwards of two jam-packed hours. Vedder was vocally on form following a blip in June, kicking into the show on the twinkling Release as he and his band powered through 24 tracks, culminating in a one-two of anthem Alive and a cover of Neil Young’s Rockin’ in the Free World. There isn’t much about Pearl Jam that you could criticise; hell, the band even took out time to show a Spanish video combatting unnecessary and unwanted sexual harassment. It received a raucous response from the crowd, and quite rightly so. Even without a new album (new song Can’t Deny Me did feature, though), Pearl Jam have proven that they’re still as relevant as ever in 2018.

Now, picture this. It’s 1:30am, and you’re standing in an absolutely jampacked The Loop tent waiting for what many have hailed as a live music revolution. That’s right, Justice are in town. The French electronic music duo are far more than their description does them justice, with Gaspard Augé and Xavier de Rosnay once again proving that they are absolute masters of their craft. They treated a full tent to an absolute battering ram of hits, hits and even more hits as the beat flowed from one banger to the next, including early outings for fan favourites Civilization and D.A.N.C.E., both of which made for manic response. There’s not an awful lot which Justice can do wrong, especially when you add their visual-heavy live production to the mix. It’s the stuff dreams are made of, and over on the Madrid te Abraza Stage Kasabian tried (and only just succeeded) to achieve similar levels of memorability. Kasabian are the ideal festival band – just look at their hits – but you can’t deny that something felt off about their Mad Cool show. Set opener Ill Ray (The King) set the tone high in a predictably Kasabian-esque way (i.e. riffs, pulsating beats and Tom Meighan’s faux-arrogance), but from that point onwards it seemed to go downhill ever so gradually. Why this was the case remains a mystery, but for once it seems like Kasabian didn’t quite hit the mark like they tend to do. Over on the MondoSonoro Stage, DJ and birthday boy Colin Peters treated the baying masses to a slew of nostalgic club hits, including some smashing 80s club bangers and a host of rock hits. There’s nothing better than watching an entire crowd lose their shit to a Depeche Mode classic at 2:30 in the morning. It’s a unifying scene of sorts, one which really sticks with you even if it is a simple DJ set. Back on the Mad Cool Stage, MGMT had the honour of closing out the entire day with their visual-heavy and quirky live show, one which is largely based on new album Little Dark Age. Despite the commercial and critical success of Little Dark Age, though, it was their hit-filled back catalogue which sent the crowd into a frenzy. Time to Pretend, Kids and the groovy Electric Feel all featured at various points in the show, sending the crowd into a fuzzed out, friendly daze as they left the festival site at the close of day one. It was a relatively successful day, and we only say relatively because (music aside) the organisation had experienced some teething problems which were largely down to malfunctioning pin machines and entry scanners. Still, though, Mad Cool have hit back at anyone who doubted them in 2017 and put on a brilliant first day.