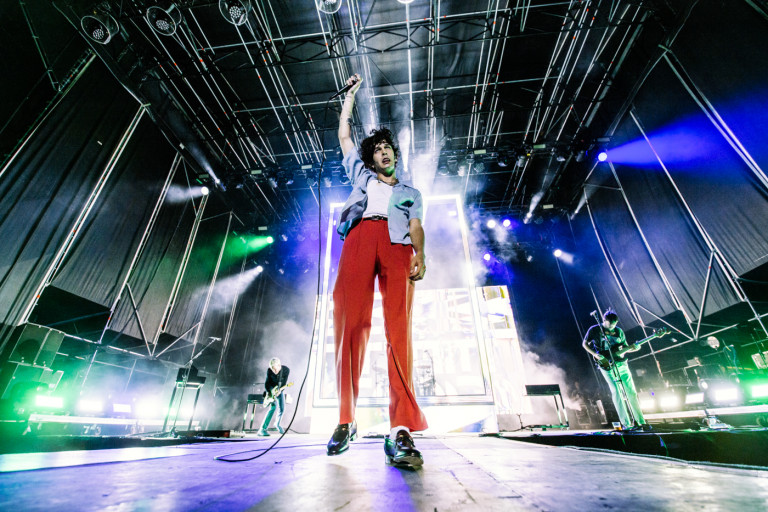 The last day of a festival can always be the most daunting of affairs for festivalgoers. Not only does it give you one final chance to go all out and have fun, but it also means that return to reality is unfortunately right around the corner. For some 50,000 festivalgoers, the final day of Mad Cool Festival offered up a whole variety of exciting performances from some of the biggest acts in the world. With The Cure and Prophets of Rage topping the bill alongside undoubted band of the summer The 1975, very little could possibly go wrong on the final day of a problem-free Mad Cool.

Former Smiths guitarist and all-round legend Johnny Marr has become somewhat of a solo phenomenon in his own right of late, brushing aside the endless comparisons with his former band by bringing out a constant stream of fresh and exciting solo work. His set in Madrid kicked off proceedings on the main stage in absolutely searing heat, centring the show on latest album Call the Comet. He found time to slip three Smiths song into the set, which closed on a rousing rendition of There is a Light That Never Goes Out. Given the circumstances Marr found himself in at that point (40 degree heat at the start of the night), he did a pretty good job of keeping the crowd interested. Bear’s Den, who followed on the Comunidad Stage, seemed visibly less impressed by the lack of audience. Taking to the stage in front of a mere 100 people, the folk duo did their best to attract a crowd with clear difficulty. The set itself was of the usual high standard the band pride themselves on, but Mother Nature had other ideas. Cat Power‘s set suffered similar afflictions, but it didn’t faze the American vocalist all too much.

The first highlight of the night came in the shape of Le Butcherettes, who drew a sizeable crowd to the Consequence of Sound stage by means of their hypnotic alternative rock. Frontwoman Teri Gender Bender is an absolute force of nature onstage, tearing through an energetic set alongside her band as if it was her last day on Earth. The Mexican punks managed to work the crowd up into a frenzy towards the end, pulling that particular stage’s biggest crowd of the weekend by a country mile. Back on the main stage, a seemingly drunk Beth Ditto and her band Gossip battled sound troubles for their first Spanish show since 2013 (and their first in the capital since 2007). Despite Ditto and co.’s best efforts, the show did not go down as much of a storm as you may have hoped from a group as renowned as Gossip. The Twilight Sad performed on the Mondosonoro Stage not too soon after, putting on another solid show as we’ve come to expect from the dark Scottish collective. Together with Mogwai, they presented festivalgoers with a one-two of beautifully introverted performances from Scottish artists. Mogwai’s soundscapes served as a perfect moment of rest for revellers attempting to cope with the combination of alcohol and heat.

Back on the second main stage, Prophets of Rage performed their first European show in over a year in front of a relatively packed field. The supergroup consists of Rage Against the Machine, Public Enemy and Cypress Hill members, most notably guitarist Tom Morello and vocalist B-Real, having released a debut record back in 2017 which blended the best elements of each aforementioned band. There’s new music in the pipeline, with Made With Hate receiving its debut showing in Madrid. The fiercely political banger came early on in a set which successfully did its best to avoid becoming a nostalgia trip of sorts, something bands like Prophets of Rage often run the risk of becoming. Not that there wasn’t time for any nostalgia at all, though, with a Public Enemy and Cypress Hill medley climaxing on a bouncy Insane in the Brain, before Rage Against the Machine’s Killing In the Name tore Madrid a new one. Some nostalgia trips are worth reliving, just ask The Cure. They topped the bill on Mad Cool’s final day with a career-spanning main stage set that never failed to disappointed. Over the course of 150 minutes and 27 songs, Robert Smith and co. had the crowd in the palm of their hands, opening on a twinkling rendition of Plainsong as they slowly built up the intensity song by song. An early presentation of Pictures of You set the tone for the career-spanning set, one which found an early highlight in the magistral A Forest before peaking – of course – on the legendary Friday I’m In Love. It’s a song which will forever stand the test of time for a band as Chameleon-esque as The Cure, and who are in no danger of falling out of relevance any time soon. With a new album expected soon, it looks like a new era is about to unravel itself for the Crawley icons.

One band whose idolisation of The Cure nearly got in the way of their own performance was Saturday’s standout group, The 1975. It didn’t take long for frontman Matt Healy to berate the festival’s choice of scheduling them at the exact same time as Robert Smith and co., and you can’t blame him for his annoyance. Although the overlap in fans isn’t too big, you couldn’t help but feel sorry for The 1975 as they performed to a Comunidad Stage crowd far smaller than what their current status warrants. It gave the show a definite sense of rare intimacy (emphasised by the lack of backing dancers), something which you won’t get to experience all too often from a band as prominent as Healy’s. New album A Brief Inquiry Into Online Relationships formed the backbone of their late night Madrid show, with highlights TOOTIMETOOTIMETOOTIME and Sincerity Is Scary slotting in nicely alongside fan favourites Love Me, Somebody Else and set closer The Sound. As soon as the show came to a close, the band jumped into minivans which raced them down to the main stage in order to catch The Cure’s encore. Which we probably all would have done, to be honest. Greta van Fleet took to that same stage an hour later, blending ferocious rock and roll with stadium-ready antics for what turned out to be a memorable hour of balls-out riffs, rhythms and anthems. Dutch garage rockers Pip Blom and London electro pop trio Years & Years marked two of Mad Cool’s final performances of the year, both going all out with the energy in their own unique ways. Ticket sales may not have been as amazing as in 2018 (the unbeatable year), but in 2019’s edition Mad Cool finally found themselves capable of organising a sweltering edition which went largely hitch-free, which is one hell of an achievement moving forward.