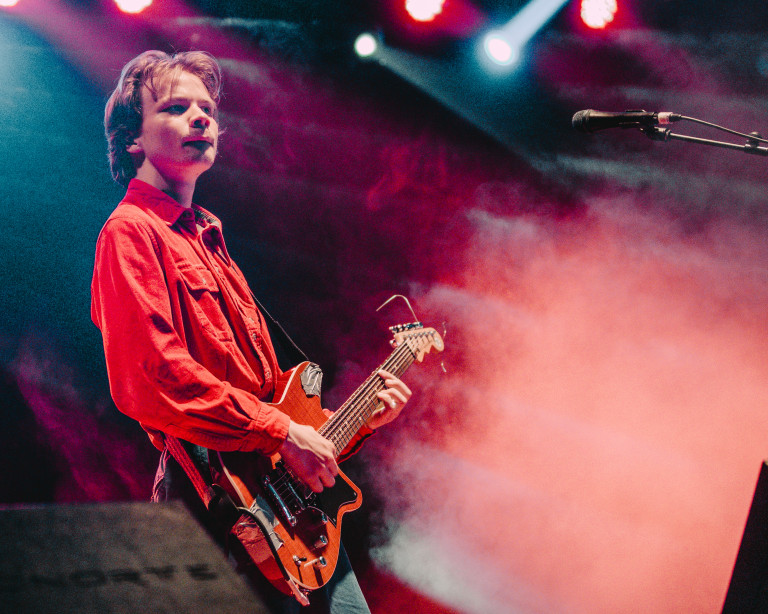 Seldom does a band come along with the sheer intensity of black midi. The British experimental rockers emerged from London’s grimy undergrowth last year to bucketloads of rightful critical acclaim. You see, that’s because Geordie Greer and co. are one of the most powerful bands around right now, a feat they hammered home during a manic show at Mad Cool Festival in Madrid last night. On a day littered with massive performances from the likes of The National, Smashing Pumpkins and Vince Staples, black midi absolutely stole the show.

Day three of Mad Cool’s tragically undersold fourth edition kicked off with a set from indie folk collective Palace, who pulled off a memorable set in front of an unfortunately sparse crowd. Playing at 6pm in Spain isn’t cut out for everyone, especially when you bear in mind that temperatures were bordering on the 40 degrees at this point. Not that this fazed Palace, though, who still put on a great display. Sharon van Etten found herself at the hands of the heat not too soon after, closing out her European tour in front of a sparse field. The highlight came early on in the shape of energetic cut Comeback Kid, taken from new album Remind Me Tomorrow. It’s van Etten’s strongest collection of music to date, and live this comes across incredibly well. One show which didn’t come across all too well, though, was American Authors’ meagre set on the Comunidad de Madrid stage. They’ve been riding the wave of success presented to them by hit track Best Day of My Life for a while now, maybe too long. Miles Kane had little difficulty in gearing the crowd up for an energetic hour, treating them to cuts from new album Coup de Grace. With glitter on his face, Kane shone, quite literally, in the basking sun.

Mad Cool has taken the bold step of booking a healthy dose of pop acts this year, something which has gone down well with crowds at festivals around Europe (just look at Rosalía, for example). One of the third day’s biggest draws was Marina, who delivered an airtight exercise in pop perfection as the sun slowly started to set. New album LOVE + FEAR is a rebirth of sorts for the Greek singer, who was flanked by colourful dancers and backing vocalists during her set. Early highlight Hollywood slotted in nicely alongside the newer cuts, with fan favourite Primadonna marking the highlight of the hour. Finnish singer ALMA followed on the same stage, packing a punch over the course of sixty energetic minutes. Milk Teeth provided energy of a different kind on the Consequence of Sound stage, making up for last year’s cancelled set with a powerful barrage of riffs. While that went down, The National took to the stage as the official second day headliner, tugging at the heartstrings of many a fan with cuts from new album I Am Easy To Find. Flanked by three backing singers (among them Lisa Hannigan), Matt Berninger and co. made for one of the most magistral moments of the weekend on highlights Don’t Swallow the Cap and The System Only Dreams In Total Darkness. Mad Cool’s poor ticket sales may have given the field an empty feeling, but on the inside fans were far from empty. They were full, emotionally.

Back to black midi, though. The quartet took absolutely no prisoners from the off as they kicked straight into the abrasive and almost violent Near DT, MI. It’s a surefire contender for one of the song of the decade, it’s no-holds-barred intensity an outlet of pure chaos. It set the tone nicely for what followed on the Consequence of Sound stage, with the likes of the intricate Ducter and Speedway serving as further highlights alongside 953, the opening track on massive debut album Schlagenheim. Although black midi are one of the most left field bands on Mad Cool’s bill, they’re by far the best. And by far, we mean far. Vince Staples had trouble pulling a sizeable crowd to the Comunidad stage some moments later, which was likely down to an unfortunate overlap with Billy Corgan’s ego. Although Staples’ show was one of the day’s best, you could definitely sense the disappointment on his face at the sparsity of the crowd. Which is a shame, because critical darlings like Vince Staples are unmissable live acts. Back on the Consequence of Sound stage, The Slow Readers Club made for one of the biggest surprises of the day. The Manchester rockers didn’t have much to work with crowd-wise, but a small group of diehard fans down the front made up for this. “Readers! Readers” they cheered as the band took to the stage, kicking off on a snappy one-two of Fool For Your Philosophy and Lunatic. They set the bar very high from the off, and sustained this so well that you’d be forgiven for thinking they were a stadium band back home in the UK. Alas, though, for they aren’t there just yet. Next door, on the Loop stage, Eric Prydz pulled a packed tent for his high-octane and visual-heavy house show. Prydz’s shows never stray away from their usual formula, but that doesn’t make them bad by any means.

Wolfmother had the honour of topping the bill on the Comunidad stage, doing so in style with their fresh brand of gritty rock’n’roll. The Aussies are no strangers to the big stage, something which you could easily sense in how frontman Andrew Stockdale worked the crowd at the snap of a finger. Victorious marked a highlight in the set, one which – for many – was their final show of the night.  If Wolfmother didn’t satisfy your need for rock fully just yet, then Demob Happy were on hand over on the Consequence of Sound stage to quench that thirst. Debut album Holy Doom served one of the strongest new rock records of 2018, and it’s an album which has taken the band all over the world with the likes of Nothing But Thieves and Royal Blood. The crowd may have – as expected this weekend – been relatively sparse, but that did nothing to take away from Demob Happy’s sheer power and rocking monstrosity. Back on the Madrid te Abraza Stage, Empire of the Sun closed out proceedings with a reimagined set centred on seminal album Walking on a Dream. The debut album celebrates a decade of existence this year, having formed out an intrinsic part of late 2000s pop music upon its release. The Australian duo found themselves flanked by alien-like dancers as frontman Luke Steele donned his most flamboyant and extravagant gowns and headgear. Opening on the massive Standing on the Shore, Steele and compatriot Nick Littlemore did their thing under an enormous video screen which projected trippy imagery for the bulk of the night. As you’d expect, though, it wasn’t until mega smash hit Walking on a Dream that the relatively packed field lost its collective shit. It’s one of the best songs of the last nineteen years, and one which – alongside its creators – deserves a space on the pop music hall of fame. Empire of the Sun don’t tour Europe often (this was their first show in Madrid), which made their late night Mad Cool set all the more special.