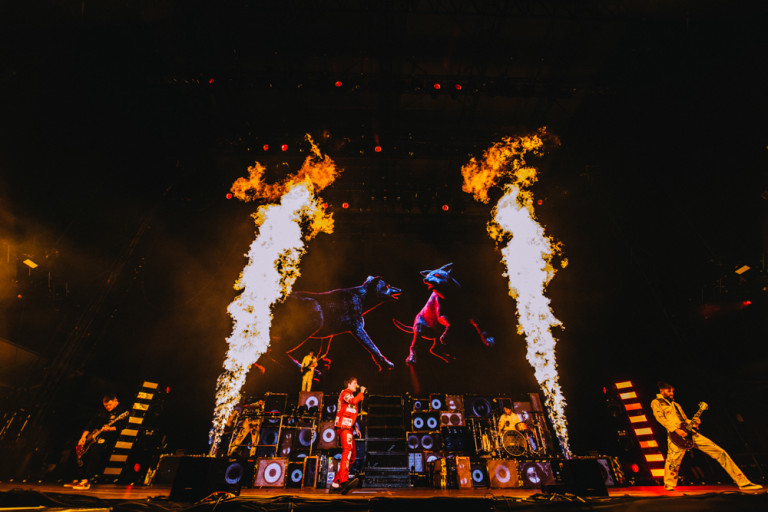 MAD COOL 2019: Bring Me the Horizon & Rosalía Bring the Heat During Welcome Party

How do you honestly top the incredible line-up that Mad Cool Festival offered up last year? It’s a question which was on the minds of thousands once the Spanish festival came to a momentous close last year, and although 2019 isn’t as strong, it’s still one hell of a sight to behold. Not only does the Madrid bash offer up sets from The National, Bon Iver, The 1975, Smashing Pumpkins and nearly one hundred more acts across its three main days, but it also comes with its very own pre-party. This pre-party is smaller in scale, featuring Bring Me the Horizon and Rosalía as its main draws.

British rockers Don Broco kicked off proceedings on the festival’s second main stage, performing for forty minutes to a small but dedicated crowd where the energy made up for any lack of crowd. Frontman Rob Damiani will always be an ultimate force to be reckoned with both on and (as we discovered) off stage,  descending into the crowd towards the end of his band’s set. Highlight and finale T Shirt Song saw the crowd wave their t shirts around in the air, marking a massive start to a massive day. Metronomy were unable to match Don Broco’s energy levels, but then again it’s not like you’re able to compare the two. Where Don Broco bring the hard-hitting energy, Joe Mount and co. bring the grooves. New album Metronomy Forever is due in September, with the band’s funky Mad Cool set giving crowds a taste of what’s to come in the sickly sweet Salted Caramel Ice Cream. Old hits The Look and Love Letters received rousing renditions, sounding as fresh as ever for a band who have never shied away from reinventing themselves.

The Cat Empire followed over on the second main stage, although it’s safe to say that the show was not on the same level of their usual indoor spectacle. Speaking of spectacles, though: Rosalía. The future of pop lies in Spain. More specifically, the future of pop rests in the hands of Rosalía. The Catalonian vocalist made her name a couple of years ago when she took the flamenco world by storm, subtly leaving it somewhat behind as she delved headfirst into Latin pop on last year’s El Mal Querer. Its release propelled her into the upper echelons of modern day pop music, and the timing couldn’t have been more perfect when you bear in mind the successes that Latin artists have enjoyed in 2019. Appearing on the main stage, and backed by a group of dancers, backing vocalists and a percussionist, Rosalía delivered pop perfection with the utmost swagger and assurance. Set closer MALAMENTE served as the highlight of the early evening show, cementing her status as the future Queen of Pop. Spectacular.

As the sun set and the searing heat started to cool down drastically, Swedish pop star Lykke Li took to the second main stage. Over the course of an hour, she offered up a brooding mix of dark indie pop alongside her moody live band and a slew of low hanging lights. As performances go, it was a memorable occasion to witness, yet perhaps it had come across better in a tent. Once the moment everyone came for – I Follow Rivers – arrived, you could sense the buzz of energy increase across the sparse field. Hit and miss, with more of the former than the latter. Back on the main stage, headliners Bring Me the Horizon marked their biggest Spanish show to date. New album amo is a big departure from their previous output, serving as the perfect sonic progression for a band who have never been afraid to switch things up in the studio. This time round, they’ve also switched things up live, upping the production value with tons of TV screens, walkways, creepy dancers and the like. Frontman Oli Sykes wears a red suit emblazoned with newspaper cuttings off mass murder verdicts (including the Manson cult), his vocals a mix of snarling growls and serene cleans. People have given him shit in the past for not delivering live, but it seems to be the case that he’s cleaned up his vocal act for the better. Set opener MANTRA (complete with the aforementioned dancers) set the tone instantly, hitting hard as co2 blew across the stage like a mushroom cloud. A frenetic and fire-laden House of Wolves followed early on, turning the intensity up by a few notches before the restrained medicine turned it down a touch too many. The 75 minute long set served as a perfect time capsule, focussing on everything the band has done so well in the past whilst also providing doubters with a glimpse of the future. Shadow Moses and wonderful life produced the pits, with Grimes collaboration nihilist blues starting a mini rave as Sykes made his way up the VIP tower at the end of the pit divider. He spent a while up here, finishing the song before he ordered a drink at the bar. A humanising moment, you could say. It wasn’t until set closer Throne that everything came together though, with the Sheffield quintet (minus guitarist Lee Malia) absolutely tearing the house down in what should serve as their best Spanish appearance to date. It’s going to be a busy summer for the band, but at this rate it looks like it’s going to be one hell of a strong one.