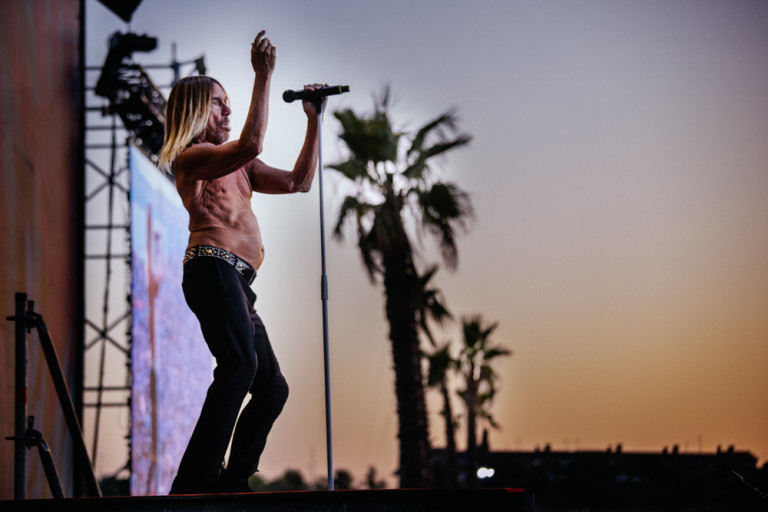 MAD COOL 2019: Iggy Pop’s Still Got It On A Day Full of Surprises

Two words: Iggy Pop. The Godfather of Punk, as some may know him, is still well and truly at it at the ripe old age of 72, conquering stages the world over night after night like it was his God given right. Who’d have thought that he’d still be giving his A-game after all these years? This writer certainly didn’t. Last night, Pop treated a sweltering quarry in Madrid to the best performance Mad Cool Festival has seen in its four year existence. Jack Parker talks you through the best performances to grace the stage on Mad Cool’s first official day.

The day started in the searing heat on the Comunidad de Madrid Stage with Scottish singer-songwriter and social media star Lewis Capaldi. Capaldi’s no stranger to success, having blown in recent months due to a slew of sickly sweet, incredibly sad break-up songs. Asking a jubilant crowd (complete with novelty Celtic fans) if they liked rock and roll proved to be the highlight of the show, simply due to the fact that his response was banter of the highest order. “You came to the wrong feckin’ gig” he joked. He didn’t melt in the heat, but it wouldn’t have been a shock if he did. While Sheafs tore the Mondosonoro Stage a new one, Australian multi instrumentalist Tash Sultana proved exactly why she belongs on a stage as big as the main one. Sultana has become somewhat of a phenomenon among European listeners, her loop-infused indie folk striking a real chord with fans up and down the country. So much so that she’s now able to sell out entire arena’s on the back of her mesmerising guitar work and vocals. This was no different in Madrid, where she had the field in the palm of her hands. Once hit track Jungle kicked in, you could be certain of the fact that not a single person had their eyes diverted away from the stage.

Anyway, back to Iggy Pop. The fact that he was billed on the festival’s third biggest stage raised eyebrows back when it was announced, but once he kicked into gear on the infectious I Wanna Be Your Dog all was forgiven. It doesn’t matter on which stage he stands, because the end result is always the same: memorable, iconic and frankly mad. At 72, Iggy still possesses the boundless energy of a 22 year old, descending into the crowd early on and giving the field a sight to behold. Mad Cool hasn’t been rocked this hard in a very long time. Bon Iver provided a contrasting performance over on the main stage, serving as the day’s official headliner. As headliner, Justin Vernon was always going to have a tough time on such an all encompassing stage. His music thrives on intimacy, its delicacies always best rewarded through close attention. Headlining the opening night is most suited to a more upbeat artists to meet the crowd’s excitement. As amazing as the sound is, better than any previous years on the main stage, the general chatter drowns out the subtleties. The average attendee here wants something they can shout along to, but Bon Iver is not that man. It’s a shame, as his performance is pristine. Despite the tight production of 22, A Million, these songs sound more vital and powerful on stage than ever before. Vernon gives it his all, but it only reaches the ears of the faithful. New album i,i is due at the end of the summer, with the initial teaser tracks promising a hell of a lot for the future direction Vernon seems to be heading in.

If Bon Iver wasn’t your cup of tea, then your best bet was to camp out at the Mondosonoro stage for a double dose of sweet electro pop. Let’s Eat Grandma and Haiku Hands took over the stage with respectively slick sets, the former centred on sonic power and the latter on brazen energy. That brazen energy was also present over on the third stage, where The Hives did exactly what they do best: cause carnage and look good while doing so. Pelle Almqvist is the perfect frontman, his energy boundless and voice nearly flawless. If Tick Tick Boom didn’t get you going, then nothing will and that’s a fact. Noel Gallagher and his High Flying Birds took on the second main stage, showcasing cuts from across both his solo and Oasis back catalogues. The highlight, though? His rousing rendition of The Beatles’ All You Need is Love. Because in a world where the Gallagher brothers still detest one another, love really is all you need. Vampire Weekend turned the main stage into one massive party pit at the same time, treating Madrid to cuts from fantastic new album Father of the Bride. Ezra Koenig is forever the charming frontman, gearing up the crowd as they careered towards all-round anthem A-Punk. It’s a song which for many stands as the pinnacle of 2000s indie rock, and it’s hard to believe anything otherwise. The Chemical Brothers closed out the main stage a couple of hours later, bringing Mad Cool’s first official day to a blistering end.