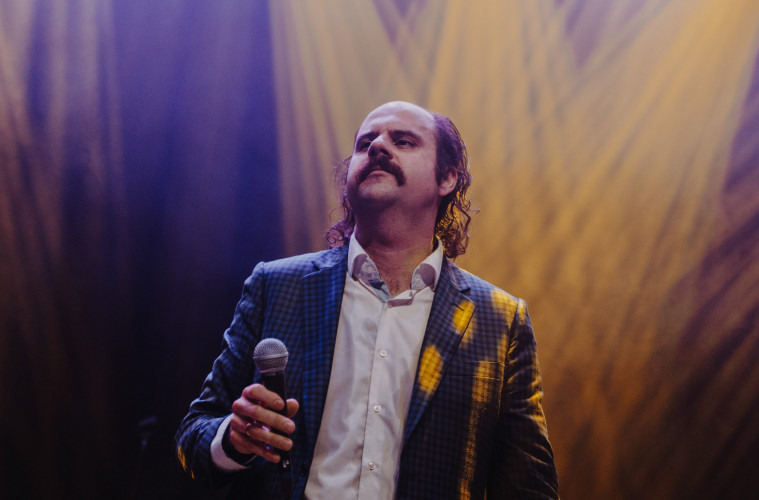 The Man, The Myth, The Experience: On the Phone With Donny Benet

Last month, Australian dancefloor hero Donny Benet returned on new album Mr Experience, a 40-minute exercise in sublime disco pop. The record sees Benet absorb elements from across the board, including sophisticated RnB, upbeat Italo and old school funk. Jack Parker called him up to discuss the album, his image and why 80s musical culture is so appealing.

Hey Donny. How are you doing?
Abnormally normal, like usual.

Tell me more about Mr Experience. What’s the story behind its creative process?
Oh man, umm. I’ve been talking about so much, I really should know this. Creatively I’d just come back from a bunch of trips, and I had the intention to write something that would appease European festival crowds. I looked at what I’d written back in January 2019, and most of it didn’t work. I had to start over again, and because I’d toured so much the last few years I only had short writing periods. I’d be home for two months and then have to get going and hop on a plane again. I came back from Europe in July 2019, then I went to America and after that I had all this time – from August until November – to write. A lot of the writing process involved getting all the bad songs out of the way. Those last three or four months were very focussed, and I really honed in on the music, the concept and how to balance it all.

You mention concept. Is Mr Experience a character or alter ego of sorts then?
I guess it was just a continuation of The Don, somewhere for that to go. The Don is a very brash guy who I’d written about. A song like Love Online, for example, is a cynical interpretation of a few friends I have who’d been using Tinder and had disastrous results. That song was a reaction to things like that, but on this album it seemed more logical to progress. I didn’t want to write about the same stuff; I evolved in a similar vein, but it was conceptually more mature.

So it’s the follow up to The Don, an album which elevated you greatly in Europe. What do you think it is about your music that appeals so much to overseas audiences?
I honestly don’t know, haha. I’m not complaining though! I guess that European audiences are just exposed to much more music than in Australia. In Europe you can go to a different festival every weekend of the year, whereas in Australia it’s very limited. I think my music lends itself not just to festival crowds, though; it’s just fun, and you guys love to have fun. There’s been different reactions around Europe, but in Australia it’s only really turned in the last few years. It’s hard not to be pigeonholed into weird little categories here, because otherwise people in Australia don’t really know what to do with you. Now people have accepted that I’m just out of the box. In America they like the sincerity of the lyrics, which is funny. The Aussie humour is more about taking the piss, but the American crowds saw it differently. I can’t work out what it is about Europe, because country to country there are very different reactions. They’re all good reactions of course, but even playing in the Netherlands versus playing in France creates different yet universal experiences. Audiences in Europe are always there to have a good time, though.

There’s prominent elements of Italo disco throughout, as well as a lot of emphasis on bass. How did your approach this time around differ compared to The Don?
This time around I was singing differently, more close up into the mic, during the demo period. It just made sense to sit back vocally as it’s my weakest trait. My strength is that I’m a bass player, and so we had a lot more heavy rhythm tracks. I could hide the weaknesses in my voice by bolstering the bass and drums. I had stripped everything back a lot more as well. I tried to use less notes so that the bass and the drums could shine even more. In late 70s, early 80s Italo and RnB you have a lot of prominent drum patterns and repetition in the songs, and that’s where the focus laid. Bass would always play a very melodic role even though it’s often just seen as a supporting instrument. They would perform the melodies on bass! So I decided to step back with the singing and sung to my strengths, which aren’t very strong.

Did it feel difficult for you to bring out this album in a time where you won’t even be able to play it live for god knows how long?
It’s funny, because a month ago I thought it was the right thing to do. Momentum is a funny thing too, you’ve really got to use it wisely. If I’d held back and released the album next year we’d have no idea how it would pan out. Things are moving along quickly, and in New Zealand things are even back to normal. If we knew how this would all go then we might have waited, but I’ve built up quite a lot of momentum. I’d just come back from a successful US tour in February, so I wanted to make use of that. With the lack of releases at the moment I have a lot more press interest too. It sucks not being able to play, so we’re working on putting together some streaming stuff. But we just don’t know, and I guess that’s what hurting a lot.

Of course you’d been playing more with your full live band before all of this. Is Mr Experience an album made for the stage?
I think so. When I wrote The Don I’d kept in mind what it would be like to play these songs live, and they translated pretty well. Knowing that I’d be touring Mr Experience around the US, Australia and Europe with a live band at some point, I had to make sure it would be possible to play the album live. That’s a good way of approaching it. One thing I did focus on, too, was that the album had a distinct A side and a distinct B side. I really paid attention to the contrasting tracks, not per se in the sense of a different concept on each song, but just thinking about how it’d play out live. The album order is a good album order, and I think it’s also a good live one.

Innuendos are a big part of your lyrics. What’s the cut off point for you? At what point do you go, “this one might be a bit too much?”
I like an element of humour in everything. It’s good to have serious things, and there’s plenty of other artists out there who sing serious, beautiful and heartfelt songs. But it’s not for me. My personality outside of Donny is tied very close to that, and so on this album I tried hard to have enough nice gestures but also to keep it open. The Don was a brash piece of work, but Mr Experience hits the spot. I want to keep an element of cheek in there a bit. I really like artists like Ariel Pink and John Maus. Ariel Pink can write a beautiful song, but also a very oddball one. I try to live within those parameters, rather than to just write the next great Aussie love ballad.

Do you ever worry that some people don’t take your music too seriously and see you more as a fun vibe or aesthetic? For example the track Sophisticated Lover, which broke into the Triple J Top 100 back in the day.
Hmm, not really. I pay so much attention to the music, and bringing the band with me to Europe really legitimised what I do and what I’m about. There’s painstaking detail which goes into making sure the songs are as perfect as they can be, and this is the way in which I’m most comfortable telling a story or making a comment in social settings. Another interview I had today was with an American journalist, and the funny thing is that European and American audiences have grown so quickly that they didn’t see the journey before this. My first album Don’t Hold Back was very avant garde, improvised and out of place. It was almost a punk rock, indie pop album, not as a genre but as an attitude. I guess that over time my music has evolved but still has its own style. I’ve found what I’m comfortable with.

To link back to that, how do you feel about the song Sophisticated Lover now?
Fine! It was written at a time where I was really into John Maus, Ariel Pink and Tonetta. I like that that song is still there, because it shows how much my music has changed. If I hear the albums that I liked at the time I wrote Sophisticated Lover then it’s really a place in time for me. Hopefully I’ve evolved since then.

Mr Experience sounds like one big love letter to 80s musical culture. Was this something you consciously had in mind?
I get that quite a lot. People tell me that I’ve written an 80s record, and I really like that era. From a musical perspective it was great – you had HiFi recordings, amazing session musicians and a shift in technology and techniques. As a bass player, that really is a golden period. There was so much more technology, they had multi tracks and so instruments like the bass became far more prominent in the mix. That’s a very appealing period in music to me. When I write music, I’m first and foremost thinking about how I have to enjoy listening to it and performing it I write for myself, and if people enjoy it then that’s a bonus. And it happens to be that I really enjoy that combination of synths and drum machines. I didn’t want to do live drums on this album, also partly because of the scheduling and that the people I wanted to work with weren’t available. Maybe in the future I’ll be able to expand my home studio, especially seeing as I’m not able to tour and perform. I have an acoustic drum kit here, and the next phase is to write and record with that in mind. I don’t set out to write 80s albums per se, even though the vocal and lyrical inflections are there. The motivational speaking and unbridled positivity of 80s music is also there, but it’s funny you know? If someone writes an album in their 20s or 30s while trying to sound like a 60 year old folk singer it gets seen as honest, but anything with a synth or drum pattern is seen as aged. Pop music uses a lot of synths and drum patterns to this day. I get it, but it’s also a funny thing that doesn’t get addressed properly. Certain instruments used in certain ways get labelled by a certain era. Mr Experience is out now.