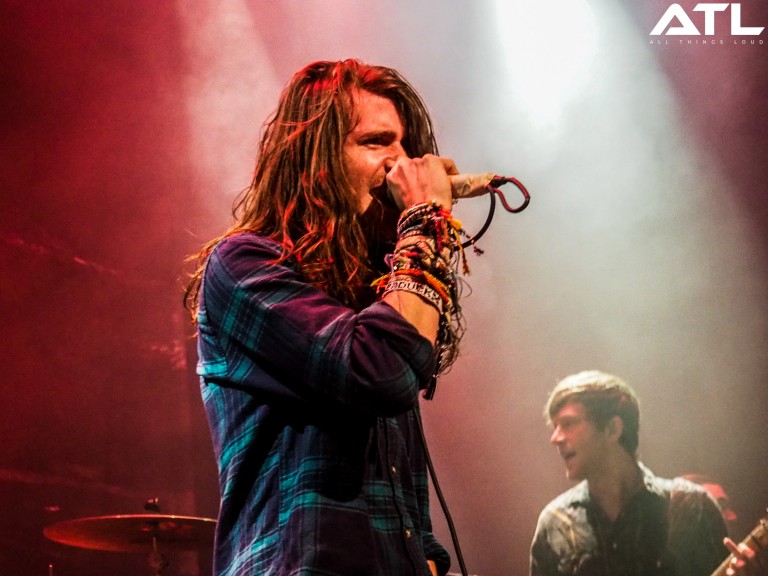 Mayday Parade: “Everything Has to Become More Mature Now”

It’s been a busy day for Mayday Parade’s Derek Sanders. Having arrived in the Dutch city of Eindhoven yesterday, he and his band spent all night out partying during the busiest night of Holland’s much-loved carnival season. It’s a set of days which any touring artist will be pleasantly surprised by, as it gives the usually straightforward and dullish Dutch population a chance to show off exactly how they enjoy themselves. Following a crazy night out on the town, Sanders and his band have been spending the day preparing for their first show on mainland European soil since new album Black Lines came out. Hot on the heels of a busy meet and greet, Sanders sat down with All Things Loud to discuss influences, Mayday Parade’s new direction and what we can expect from them in the future.

As we sit down in an empty catering room, Sanders proceeds to tell us the story of their “wild night” in Eindhoven celebrating carnival. “We stayed up till about 5 or 6 in the morning just partying, making the most of it all” he explains, adding that carnival’s strict dress-up rules even stopped them from entering certain bars (something which took Sanders by surprise). “One of the guys put a chicken bucket hat on his head, and we all had a great time” jokes the frontman. On a more serious note, Sanders tells us all about the process behind 2015’s Black Lines, Mayday Parade’s most recent release. “We really wanted to make it feel special and different from our previous albums” he explains, claiming that they didn’t want to “keep doing the same thing” after 10 years and five albums. “We set out to find a brand new producer, working with Mike Sapone [Brand New, Taking Back Sunday], who is such an incredible dude” explains Sanders. The band intended to leave their comfort zones and try out new sounds, with Sanders visibly excited by the future prospects which await the band. “Now that we’ve done this, I feel like we’re able to try even more new things in the future and record whatever music we want to make” he says. Black Lines is rockier, heavier and rawer than anything Mayday Parade have previously put out, with the band wanting to capture more of their live energy by stripping down certain aspects of the record. One song which stood out head and shoulders above the rest was comeback single One of Them Will Destroy the Other (featuring Real Friends’ Dan Lambton), a track which took everyone by surprise upon its release. Its fuzzed out riffs and in-your-face attitude are a world away from what most people know Mayday Parade for, rather leaning on elements of Smashing Pumpkins and Muse. According to Sanders, the track originated from his own experimentation in a home studio space he owns. At first, he didn’t think it would be quite cut out as a Mayday Parade song, although the band eventually did latch on to its “fast and chaotic sound”. “One day I sent the demo to the guys and eventually it became one of the favourites on Black Lines, with it being the first single and all that too” he explains, proud of the fact that he and his band thought out of the box.

Where did the band draw inspiration from, though? They intentionally tried to set themselves apart from the sounds which laced their first four albums, with the imprints of bands like Smashing Pumpkins and Pearl Jam definitely present. Sanders namechecks Smashing Pumpkins’ Zero as one particular example, referencing its use of dirty, distorted guitars as a particular high-point. “Musically, there’s a lot of 90’s alternative rock influence across the whole record” he explains, adding that lyrical influence was harder to come by. “I didn’t want to keep singing about the same things as before, such as the guy-meets-girl love stories” he says, further explaining that he’s now no longer a 19 year old “kid”, but a grown man with a child. “Heartbreak songs made sense back then, but now I’m almost 30 and everything has to become more mature”. He claims that it’s much easier and more relatable to write about sad things, which is why Black Lines is still somewhat darker lyrically. This darker lyrical approach partly comes from the way in which Mayday Parade approach the writing process, with Sanders claiming that things tend to “come naturally” to them, as opposed to having a general pre-conceived idea of how a song will sound. “Sometimes I will say that I want to write a faster song, but a lot of times I’ll hear ideas and translate them into something” he concludes. It’s very evident that, away from the aforementioned direction change, Sanders and co. have started doing plenty of things differently in order to come to a more effective final product. It’s obviously vital in today’s day and age for artists to find a way of “standing out” and “being different”, because for every Mayday Parade out there you’ll have at least ten sound-alikes trying to make it as far as Sanders and co. have. On the state of the ‘scene’ in 2016, Sanders claims that there’s “so much out there, and so many ways of finding out about new music”. He compares it 30/40 years ago, when you’d hear something you like on the radio or through word-of-mouth. “We have so many ways of online streaming right now, and you can listen to just about anything at all times” he continues, further adding that he’s really been enjoying the Philadelphia’s Beach Slang. He’s also been “digging” Have Mercy (currently on tour with Mayday Parade), as well as Better Off, a band who they’ll be touring with in the United States. Weatherbox are also namechecked by the long-haired frontman, even though they’ve “been around for like 10 years”. Sanders does admit that he feels for bands trying to start out today, because “so much has changed in the ten years since we started this band. It’s much harder to get your feet off the ground”.

He definitely sees a difference between now and 2006, a time when the band were around at the height of the MySpace-era. “When we just started, we used to follow Warped Tour all over the place, standing outside and selling our EPs to people” he explains, adding that bands today who do the same have noticed a shift from giving away physical copies. “If you walk past a line of people and show them your music, they’ll be like, “oh this is cool. Is it on Spotify?” He feels as though it makes sense, despite it being so different ten years ago. A lot of things are very different, and there are also far more bands around than ever before. Of course, the annual Vans Warped Tour is one of the most effective ways for a band in the scene to cut their teeth live and learn the trade best in front of enthusiastic audiences. Sanders loves Warped Tour, and that affection is reciprocated in the amount of times which the band have been invited to play. “We’ve been doing it by routine every two years since 2008, so we played there in 2010, 2012 and 2014 too” he explains. Will they appear in 2016, though? Sanders remains uncomfortably tight-lipped about the possibility, awkwardly stating that he can’t “say anything about it yet”. His facial expressions said enough, although we’ll have to wait until next month to find out if 2016 will be another year on the tour for Mayday Parade. As we approach show time and wrap up our discussion, Sanders takes out some time to answer questions which have been submitted by Mayday Parade’s huge fan base. Aside from the usual “will you marry me?” and “when will you come to ‘Insert Country’?” questions, one fan wanted to know what the band got up to in their free time. “When we’re not busy soundchecking or doing meet & greets, we like to walk around and explore the cities we’re playing in. We’ll eat some food and do fun stuff! After the show, some of the guys go out to bars and clubs with the other bands, and we’ll just enjoy the evening” he explains, adding that they enjoy playing games like Werewolf on the bus. Jamming to some new music is a popular activity on the bus, alongside usual activities like reading and playing video games. Another fan inquired into the craziest tour shenanigans, with Sanders immediately referring to last night’s “adventurous” partying in Eindhoven. From the moment that the band got off the bus early on Monday morning, they were surrounded by people in dress-up and marching bands walking around the venue. “It was crazy”, joked Sanders. It certainly makes a change from rocking up in a dead-end town where nobody does anything, though, that’s for sure. It’s these crazy stories that make Sanders and co. really appreciate what they have and how they’re in a position to do pretty much whatever they like. And they wouldn’t have it any other way.