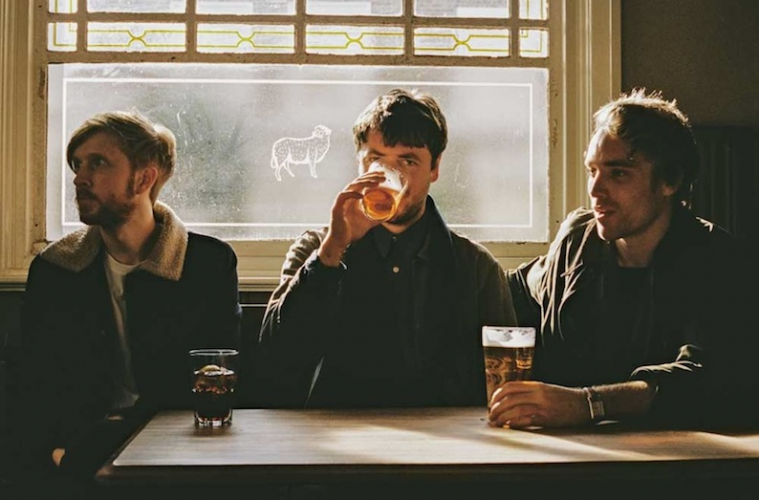 Money are an intriguing bunch of lads. Hailing from Manchester, the outfit recently released sophomore studio effort Suicide Songs to critical acclaim. Last night, the group (with two string players in tow) took to a relatively filled Bitterzoet in Amsterdam.

As frontman Jamie Lee took to the stage, his first words were a sentiment echoed throughout the evening “I feel f*cking terrible”. He went on to explain a crazy night in Rotterdam the evening before, warning the crowd that he may vomit. Thankfully for the 200-strong crowd, the already-drunk vocalist didn’t vomit whatsoever; rather, he spent a majority of the show making digs at he and his band whilst drinking a whole slew of beers (either his own or the crowd’s). The nonchalant pessimism which Lee displayed onstage is something which falls perfectly in line with what Money’s new album Suicide Songs is all about – demure situations, terrible lives and death. The record, which came out earlier this year, is a 9-song slow burning epic that bears reminiscence to the darker days of 80s bands such as The Smiths.

Had Lee not warned the crowd of his apparent drunkenness ahead of the show, it would have been something which went completely under the radar. Lee’s voice was absolutely flawless, on par with his crowd interaction. Placing his mic stand in the crowd, the frontman bantered about with members of the audience throughout the show. At one point, a fan got him a beer, before later on in the show commandeering one British woman to sing for him. “We’re just amateurs doing our best” he claimed, adding that this job may be the death of his musical career. “Ask me in ten years’ time” joked the vocalist, his voice being the lone sound echoing through the Bitterzoet all night as his band remained absolutely silent. Suicide Songs’ You Look Like a Sad Painting on Both Sides of the Sky was one particular highlight in the show, being one of a handful of tracks accompanied by a two-man string section. The record’s title track also appeared briefly, presenting Lee as a lone man with his guitar.

As the show neared an end, Lee took out time to express his extreme gratitude towards everyone’s attendance. The 380-capacity was by no means full, having only sold some 175 tickets for the show. It didn’t stop Money from putting on a memorable show, one which ended on the cataclysmic A Cocaine Christmas and an Alcoholic’s New Year. The song, which documents lonesome drug use and alcoholism during everyone’s favourite time of the year, was a fittingly melancholic end to an evening which was greatly foreshadowed by Lee’s drunken antics. On record, Money are a hypnotic and twinkling band who just about manage to match all expectations in a live setting. They might not be waiting for greatness to hit them in the face over the next few years, but it would definitely be a welcomed surprise if they took it in their stride and showed everyone what they’re truly capable of.