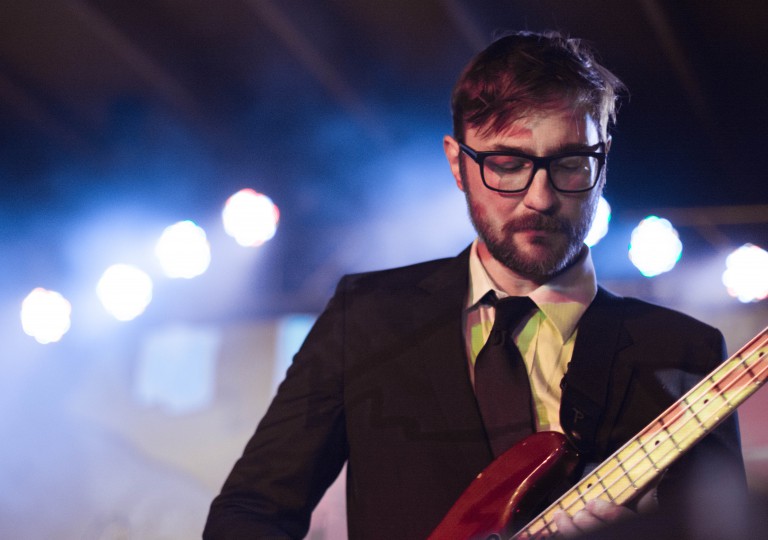 At the far end of Savannah’s boutique and restaurant-lined main street lies the Maritime Ships of the Sea Maritime Museum. The spot’s charm comes from an outdoor space nestled between hedges and rustic brick, and it was here that the second day of Savannah Stopover began with the striking Caroline Rose. In a departure from her alt-folk beginnings, Rose’s latest album invites bandmates she met in Vermont and numerous influences to produce a sound driven by infectious synth organ hooks. This transition came complete with an aesthetic overhaul as well, as the band took the stage decked out in red and blue monochrome 80s-influenced outfits. To match Rose’s red tracksuit, the band’s equipment was garlanded in lights and plastic jalapeños, hinting at the energetic heat of the upcoming performance. The songstress’ folksy roots are apparent in lyrics that achieve a perfect balance of playful and poignant, offering up an absurdist take on capitalism with Money, subtle feminist commentary in Bikini, and stomaching life’s curveballs in Jeannie Becomes a Mom. Even if the casual listener glosses over these insights, Caroline Rose’s catchy choruses make it easy to let loose. By the time the band got to their biggest song, Soul No. 5, many crowd members were jumping along with glee. Barrelhouse South’s stage became a showcase for New York bands Honduras and Public Access T.V., who brought along the musical history of the city in their sound. The punk rock that inspires the music of Honduras can be heard in their recordings, but the full force of the genre’s rebellious spirit doesn’t become fully apparent until you see the band live. In defiance of the inevitable comparison to the Strokes and other revival bands from the city that never sleeps, Public Access T.V. set themselves apart with songs off their (very) recently released album like the anthemic Rough Boy and funky Metrotech. Watching these bands perform, it was easy to imagine yourself cruising through the grungy venues and exciting sounds of the New York of decades past.  Just bordering Barrelhouse, The Bones of JR Jones captivated audience members at the Jinx. Multi-instrumentalist Jonathan R. (JR) Linaberry defied the expected gravitational potential of a sole performer by filling the venue to capacity, his emotive blues reverberating throughout the space and into the souls of of eager festival-goers lining up outside. Playing a resonator guitar with his hands and hi-hat and kick drum with his feet, Linaberry kept all his limbs occupied along with the hearts and minds of the crowd. Grandchildren and Low Cut Connie, both from Philadelphia, played Congress Street Social Club. Both bands have enough members to overflow the venue’s corner stage, but the atmosphere created by their feel-good jams had enough presence to bubble out even beyond their brimming rosters. Before starting, front-man Aleks Martray gave a shoutout to a second-grade teacher in the audience that inspired him to pick up the guitar, eliciting “aw’s” from an increasingly admiring crowd before the band started their orchestral folk-rock set. Low Cut Connie built on Grandchildren’s foundation of good vibes to create a community of revellers around and on the stage led by Adam Weiner, whose pointing and posing recalled the exuberance of Canadian band Arkells. With his raucous vitality, at one point tearing at his chest (literally – hairs were removed) and standing on his upright piano, it’s no surprise that the band is steadily gathering a raving fanbase. Even without the tomfoolery, each of the band members exhibited true artistry, especially the phenomenal Saundra Williams, former backup singer for the late Sharon Jones. Stoked by the spirit of Low-Cut Connie, the night’s intensity ended with the new-age cumbia of Combo Chimbita. The howls of vocalist Carolina Oliveras, with the scratch of her guacharacas and Afro-Colombian rhythms furnished by the talented band worked the crowd at El Rocko Lounge into a frenzy that raised the roof so high that they practically transported the attached venue and everyone in it to a riotous beachside Caribbean fiesta. FRIDAY, 9 MARCH Not to be outdone by temperatures climbing into the balmy 70’s, the final day of performances at Savannah Stopover rose to a peak of production value and talent that perfectly ended the festival’s third and final day. The outdoor stage at Ships of the Sea once again was a platform for acts with unique visual identities to match their music. Gus Dapperton started out clad in a pink sweatshirt and wide-legged cropped violet velveteen trousers stylish enough to make a seasoned thrifter jealous, completing the look with a bleached bowl cut. Though his style is steeped in 90’s nostalgia, his music is a dreamy blend of 80’s-tinged pop and soulful vocals reminiscent of Rex Orange County. Like Rex, part of Dapperton’s appeal likely comes from his ability to pen lyrics that resonate with many, all while maintaining a characteristic millennial whimsy. His sister was a notable part of the touring band with her contribution of keys and liquid vocal ad-libs. As often happens when a group gains popularity ahead of their limited discography, in this case 2 EPs and a smattering of singles, signature original songs like I’m Just Snacking were furnished with covers such as Mario’s Let Me Love You. A rendition of the perennially popular Twist & Shout capped the end of the set, leaving the audience bristling with enough energy to hold them over until the next act. Before long, of Montreal appeared and exploded into a frenetic hour and a half set of past hits and new songs from their latest addition (LP White is Relic/Irrealis Mood, released just the day before) to their sprawling body of work. Bandleader Kevin Barnes took center stage in a makeshift duct taped kimono, voluminous blonde wig, and bedazzled eye makeup. For those unaware of Barnes’ gender-bending stage personas, any questions or cares were soon abandoned as he set the tone of the show with Let’s Relate, a proclamation of acceptance and community. For other artists, a bold move like Barnes’ outrageous costume may have been provocative enough, but this being of Montreal, the spectacle was supplemented by a cadre of backup dancers donning a frantic rotation of costumes and masks including winged albino bulls and pig-faced police officers. Not to be outdone, Barnes himself changed midway through the set, foregoing the kimono for a red nightgown sparkling with beads on its collar and sleeves. The get-up was sheer enough to reveal his mostly nude frame and heel-clad feet underneath, but his guitar playing and impressively sustained vibrato-laden belts were enough to distract from even that. Other visual diversions included background projections (flower and heart fractals, pop art baboons, USSR propaganda reclaimed by rainbow flags), and giant puppets requiring two people to operate from within. One of these creations was a sequined dragon head and the other a meerkat or mole, the identity of which would have varied depending on which dazed audience member you might have asked later. The band made sure to involve said crowd members in the festivities, sending out balloons in bunches or in long chains like endless linked handkerchiefs from a magician’s pocket. Though a description of the show might feel like your wildest (or worst) acid trip, there was a purpose to the pyrotechnics. During It’s Different For Girls, projected artwork flitted between images of various women and apex predators. It was a reflection of the song’s deliberately twee acknowledgement of misogyny – a visual juxtaposition that could have suggested the oppression of women or the empowerment that one feels from chanting along to, “For every one psycho bitch, there’s ten thousand aggro pricks”. Of Montreal’s show began with dancers in skin-tight muscle-printed bodysuits and ended with them in robo-skeletal versions of the same. Perhaps Barnes was trying strip away the categories we assign to each other to reveal the underlying shared humanity, or maybe the outlandish disguises were simply meant to excite and overwhelm. No matter the intent, the phantasmagorical journey that was of Montreal’s show transcended a statement about queer identity to become a jubilant celebration of just being human. A few blocks away yet seemingly a world apart from the psychedelic world of of Montreal, Vundabar delivered an inevitably less bombastic but no less memorable show at Barrelhouse South. Their hummable guitar lines might start to blend together into a single uninterrupted ear-worm when listening to their albums on a continuous loop. However, their live show injected enough character into the songs for each to have its own personality. Brandon Hagen’s voice took on a different quality for each cooing chorus in Oulala, and a slightly altered guitar solo distinguished Alien Blues. The halting refrain in Acetone, from Vundabar’s latest album, was impressively executed with as much synchrony between bandmates as its more-practiced older relatives. At the end of the night, Stopover veterans Wild Child set up in Trinity Church against a backdrop of neoclassical columns and organ pipes. The phenomenal acoustics of the space were perfect for the involved instrumentations of the 7-piece group, making the talents of each member discernible. Sadie Wolfe pulled off haunting harmonics and fiddle-like double stops on her cello with facility, while guitarist Cody Ackors and keyboardist Matt Bradshaw effortlessly switched between their principal instruments and trombone and trumpet respectively. Alexander Beggins offered up vocal harmonies backed by an unconventional baritone ukulele. Of course, leader of the band Kelsey Wilson laid down flawless powerhouse vocals and splashes of violin to complete the spiritual experience that was Wild Child’s performance. With as many attendees dancing in the balcony as at the foot of the stage, and the rest swaying, smiling, in the pews, even the non-religious “churchgoer” could have imagined a benign deity smiling down at the bliss and goodwill being spread below. This final show encapsulated all the best things about Savannah Stopover: intimate venues each with their own distinct spirit, a fantastic lineup of artists ready to be discovered, and people coming together through the universal bond of music. SATURDAY, 10 MARCH; Dylan Lai & Abi Raymaker