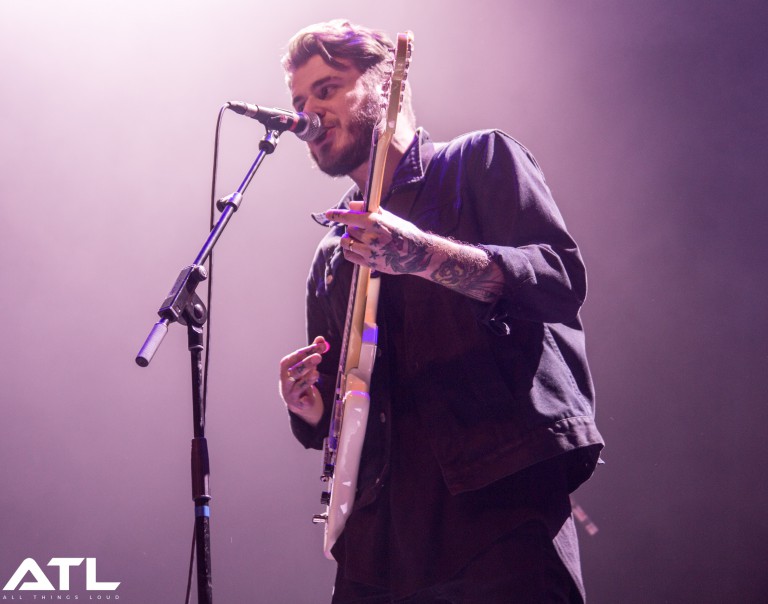 Moose Blood: “We want to write an album which sounds like The Cure”

If there’s one thing about the world in which we live that looks set to last, then it’s pop punk. The genre has seen plenty of ups and downs, with its current crop of bands enabling the short but sharp tunes to see the light of day and once more poke their way into mainstream consciousness. Kent outfit Moose Blood are currently amongst the crop of bands who are making pop punk great again, and we caught up with guitarist Mark and drummer Glenn ahead of their show with A Day to Remember in Tilburg.

Hey guys. How are you doing?
Glenn: Good thanks!

You released your latest record Blush last year. Can you outline the transitional period between Blush and its predecessor?
Mark: We recorded it almost exactly the same way as we did with the first record, working on it with the same person in Los Angeles. I guess we just had less time to write this one though, I suppose that’s the only difference. We had all the time in the world to make the first record, but on the back of that we just toured relentlessly. We had a two month gap where we started putting demos together with our mate Rich, before going out to make it. Having less time made it a bit more stressful, but it was one of the most rewarding experiences that we’ve ever had. We worked so hard when we were out there.

Glenn: Everyone just really pushed themselves.

So you felt a lot of pressure doing the recording process then?
Mark: Only from ourselves really, not from anybody else. We wanted to make a better record than our first one.

And do you think you’ve done that?
Mark: Yeah! How much of a transition do you think you’ve made as musicians since your first album?
Mark: We’ve all developed in different ways. We can all write songs better now, and we can also play together better now. That’s just down to how much we’ve done it, as we also toured non-stop for the first album. It was flat-out. Hopefully we’re better at writing and playing together, haha.

So what direction would you ideally like to see yourselves heading in on a potential new release?
Mark: I would like to make the next record sound like The Cure! I don’t know.

Glenn: We don’t tend to have a very solid idea until we start writing to be honest. We did collectively listen to The Cure the other day, though, and said that we wanted to write an album which sounds like that.

Mark: Other than that we just let it flow and see what comes of it.

Do you also write continuously on the road?
Mark: We haven’t ever really done it apart from on this tour. Before that, like when we were on Warped Tour, we messed around with a few ideas. I wouldn’t really call it writing, though. I don’t think it’s something that any of us have really felt comfortable doing. We have an environment in which we like to write in, and being away from that on the road doesn’t necessarily help us feel like we’re in the right place to start writing. The fact that it happened on this tour has been really good.

Glenn: It also really comes down to free time. On a lot of tours we’ve done before it’s been pretty non-stop, even on the Warped Tour. If you want to have a full-on day then you can’t really get your hands on much free time. On this tour we’ve had more free time, and you can start writing if you want to.

Mark: We’re all trying to get into that mentality where we’re preparing to write as well, which is something that we’ve never really had whilst touring. We have ideas knocking around which we want to work on, which means that we’ll hopefully be more prepared once we start writing properly.

You’re currently rounding up a tour with A Day to Remember and Neck Deep. How’s it been?
Mark: It’s been a great tour to have been a part of, and we couldn’t be more thankful to A Day to Remember for giving us the opportunity. They’ve enabled us to play in huge rooms throughout the UK and Europe which are rooms we never thought we’d go into. We definitely couldn’t do it off our own backs, and they’ve even allowed us to play at Wembley Arena. It’s been really eye-opening as well.

In what way?
Mark: The production, the tour and all the stuff that’s gone into it like all the crew knocking about. We’ve never done a tour like it before, seeing this much stuff going on every day. I guess the closest comparison we’ve got is Warped Tour, where there’s so much going on regarding production and crew.

Has it given you many ideas for potential future tours of your own?
Mark: Maybe, I don’t know! It would be a nice level to get to for sure.

I’ve not seen tonight’s production yet so I’m not entirely sure to what extent it reaches.
Glenn: Oh man, they’ve got a lot going on!

Mark: It’s been scaled down a little bit for Europe as opposed to what was going on in the UK. They’ve lost a couple of trucks with production, but to see what you can potentially can do is just amazing. The means and the finances to do these things are huge, but it’s just a wicked thing to be a part of.

Have you had much time to explore your surroundings while on this tour?
Mark: We did Bruges, which was nice.

Glenn: We’ve had a lot of nice days off on this tour, more so than on our own tour. We’ve actually been able to see places. We don’t really get that much time off on our own tours as we pretty much have to play everywhere. This time it’s been more chilled out.

Mark: This tour has been planned out so that there’s a day off every two or three shows, so that’s given us time to mooch around places that we never thought we’d see. We went to a little town in Italy which was just outside of Milan, and it’s one of those places which you would never have come across had you been unaware. You’d never to choose to go there on holiday or anything like that, so it’s great that we just get to walk around and explore. It’s wicked, and I think it’s the aspect we enjoy most about touring, getting to see all these places. Yourselves and Neck Deep are part of a scene of guitar bands which has garnered a lot of radio play, and it’s in a world which has seen guitar music on the decline. What’s your take on this?
Mark: I’m not sure if we can see that there’s a decline, and I think that’s just down to what we listen to, who we know, where we tour and who we work with. Maybe we’re just so involved in it that we’ve become unaware of it. Every time you play a show or festival you cross over into a different style of music, and I think that’s when you become aware of it.

Glenn: I think that the UK is doing alright again at the moment, because you’ve got bands like Lower Than Atlantis, Mallory Knox and Creeper all doing great things and being played on the radio.

Mark: Yeah. Deaf Havana have also got a new record out.

Glenn: You Me At Six too!

Mark: And all these bands are charting well at the moment. I guess maybe in the UK it’s really healthy.

Moose Blood’s new album, Blush, is out now. Stream it below.