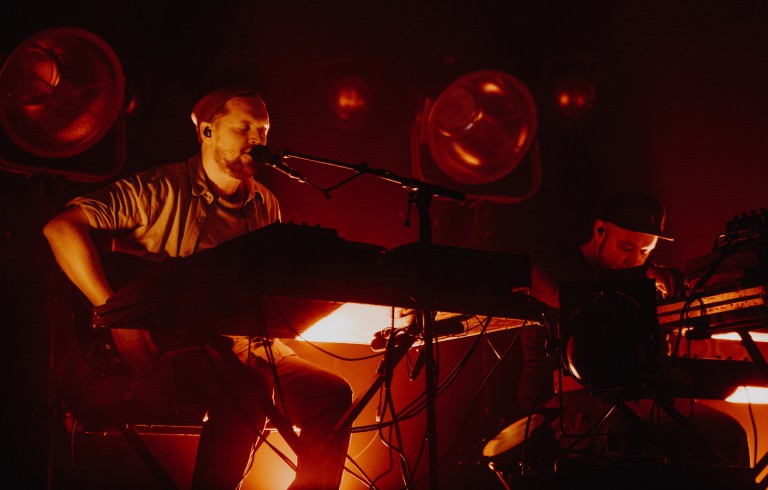 There’s something quite special about Motel Mozaique. Rotterdam’s finest music, arts and culture festival annually manages to fuse a multitude of cultural disciplines into one extremely appealing event, attracting some 2500 visitors in the process. This year, the festival took a great leap forward and pushed boundaries like they’d never done before, namely by taking some their programme and putting it in the hands of visitors. By taking over the legendary Groothandelsgebouw, the team behind the festival proceeded to hand a small group of carefully selected projects to put on their own event during the festival. The crown jewel of these? That’s tough to say, but it’s certainly a toss-up between Joep Beving‘s picturesque sunset performance and the 65 hour long party on the seventh floor of the building. Both events showcased Motel Mozaique’s relentless ability to move forward and break new ground, with the rest of the programme featuring the festival’s standard cutting-edge bands, intriguing city tours and mesmerising attractions. Over the course of the event’s three jam-packed days, we shifted our focus towards the artists who took to Rotterdam’s various stages, and below we’ve picked out the ten best.

“My name is Ariah. Just like Mariah Carey, but without the M”. That’s how the Venezuelan-born Ariah Lester introduced himself during his fourth and final appearance in the foyer of Rotterdam’s Schouwburg theatre. The creative performer – who emigrated to Amsterdam – utilises sultry RnB rhythms flecked with sporadic beats to underpin his smooth vocals, all of which tackle serious topics such as migration, the world around us and politics. Wearing knee-high boots and a feather-clad lace ensemble, Lester mesmerised a sizeable foyer crowd for four consecutive shows. Even though his billing was officially part of the additional entertainment on show, you’d be forgiven for assuming that Lester was one of the big draws considering how he packed out the foyer for a solid thirty minutes. Riffs, riffs and even more riffs! METZ were one of the heaviest acts on show at Motel Mozaique this year, and they certainly didn’t disappoint. New album Strange Peace came out last year and has served as one of their best pieces of music to date. Live, the LP takes on a whole new form as the band utilise its pummelling rhythms and tight vocals to send fans into a sweaty, limb-filled frenzy. Their Rotown show was no different, with the 250-capacity venue serving as a sweatbox from start to finish in what can only be described as the rowdiest set of the weekend. Eindhoven’s Charlie & the Lesbians are no strangers to a good old bit of hellraising, regardless of the position they’re put in or the circumstances which surround their appearance. On Motel Mozaique’s opening night (Thursday), they had a slightly tougher crowd to please as they stuck out like a sore thumb alongside soothing indie rockers ISLAND and electronic producer SOHN. Despite this, though, Charlie Hoeben and co. managed to impress the small Schouwburg foyer crowd with their frenetic and cataclysmic garage rock, complete with Hoeben’s mental – and shirtless – stage presence. With rage in his eyes, Hoeben and his band tore up the foyer like it was their last day on earth. Limbs may not have flown around the room, but if weren’t for the sake of the Schouwburg’s fancy foyer, you could bet on it being torn to shreds. Next time, perhaps. Equal Idiots are one of Belgium’s most exciting garage punk exports, and during the duo’s set in the Rotown they managed to convince a packed crowd of curious punters exactly why this is the case. The energetic pairing tore through a short-but-sharp set of rowdy garage rock tracks with effortless ease, at times sounding like an updated version of Royal Blood and Thee Oh Sees’ love child. It’s an intriguing combination on paper, and one which came to life onstage. Last year’s critically acclaimed Eagle Castle BBQ – their first – featured nearly in its entirety on the night, setting the tone for a summer which will see the duo appear at a handful of festivals, among them the prestigious Rock Werchter. Despite its prominence in years gone by, Americana music has seldom found itself at the forefront of mainstream sonic consciousness. As a genre, it often finds itself somewhat overshadowed by the expansive folk and classic rock worlds, both of which have left massive imprints on Americana’s early days. One artist who has taken Americana and given it a unique, poppy twist is singer-songwriter Natalie Prass, whose way with words sees her put out new album The Future and the Past out on the 1st of June. If her set at the Schouwburg on Saturday (21 April) was anything to go by, then you could suggest that Prass is well on the way to stealing hearts the world over with a sprawling collection of new music. Catchy rhythms and sultry vocals intertwined as Prass and her live band sent Rotterdam into a dancing frenzy which she couldn’t resist but take part in herself during set closer Ain’t Nobody, which is one of the most promising cuts from the upcoming record. You’ve heard of the Fat White Family, Childhood and Paranoid London, but what about Warmdüscher?  The London supergroup are comprised of members from the aforementioned acts, utilising the most appealing aspects of each one to come out with a project which is borderline mental and most definitely not for the faint hearted. A Warmdüscher show – which is helmed by enigmatic ringleader Clams Baker Jr. – isn’t just a gig, it’s an experience. From Big Wilma‘s gritty kraut riffs through to Neon Tongues’ gloomy synths – and via new single Standing on the Corner  – Warmdüscher’s show at the Rotown on Friday night made for one of the weekend’s most irresistibly mental and certainly one to go down in the history books. New album Whale City is due later this year, and it’s already being billed as one of the underground scene’s most hotly anticipated. Once you check out this band live, you’ll see exactly why and follow one of two paths: a) one of regret at missing their Motel Mozaique set, or b) one of happiness in knowing you saw a brilliantly chaotic band live. Motel Mozaique may place a hefty focus on smaller artists whose presence might not be on everyone’s minds, but year after year the Rotterdam bash also manages to pull some exciting bigger names out of the hat. This year, Manchester indie poppers Everything Everything served as one such big shot, having released the incredible A Fever Dream last year. Jonathan Higgs and co. have always been a spectacular band to witness in a live setting, having just rounded up a UK tour which saw them play to 10,000 fans at a sold-out Alexandra Palace. Their set in the Schouwburg on Saturday may not have been as big – supposedly a near-capacity crowd of 1,000 visitors – but it was certainly just as powerful. Set opener A Fever Dream set the tone from the off, with the stadium-ready Desire and punchy Breadwinner both appearing early on and allowing the band to warm the crowd up for a monstrous finale in the form of eclectic double-whammy Distant Past and No Reptiles. Everything Everything are one of this generation’s defining bands, serving as the perfect headliner for a festival who strive to be just as cutting edge as the band are themselves. With the festival’s close a mere few hours away, London-via-Italy’s Husky Loops had the difficult task of impressing a festival crowd who had seen multiple spectacular performances pass right before their eyes in the sixty hours prior. The good bit? They did not disappoint in the slightest. Frontman Pietro Danio Forni is an elusive character, his stage presence equal parts emotionally stirring and absent. This stark contrast in attitudes is not a bad thing, though; in fact, it adds an extra layer of mystery to a band who already carry with them more mystery than an unclaimed Harry Kane goal. Over the course of an intense hour, Forni and co. pulled a barrage of highly strung post-punk tracks out of the bag, merging their darker undertones with elements of jazz and indie rock. The groove-laden Secret Matilda (complete with a funky bassline from Tommaso Medica) and the pulsating Tempo stood out over the course of the band’s sixty minute set, proving once again that Husky Loops are a band worth keeping an eye on. Catch them at Sniester Festival in the Hague (25 May) and Amsterdam’s London Calling (26th) if you want to believe the hype, because it definitely is real.

Grisly beats? Check. Jarring guitar lines? Check. A debut album which sounds like it was made for Rotterdam’s cosy-yet-obscure WORM? Check. Otzeki‘s Motel Mozaique set had it all, with the cousin duo presenting a packed room with cuts from brand new debut LP Binary Childhood. The London pairing left no prisoners as they hypnotised a room of some 200 people into a state of trance. That’s if the room itself hadn’t done this already: WORM’s main performance area – dubbed the Central Station – is comprised of recycled (and extremely trippy) airplane panels, shipyard scraps and office desks to create an incredibly avant garde vibe perfectly suited to Otzeki’s music. Peaking on a monstrous True Love, Otzeki’s pulsating rhythms and menacing vocals echoed through the room like a lost prisoner desperately trying to escape his cell. How that sounds musically? Dark, somewhat terrifying but ultimately utterly unforgettable. Just like Otzeki. From the moment London producer SOHN left the stage on Motel Mozaique’s opening night, one thing was for certain: nothing will quite come close to the extremely high bar set by Christopher Taylor and his live band. The set was initially rescheduled from late last year, when SOHN was set to perform at the Schouwburg as part of his European tour. Festival organisers pounced on the opportunities at hand here when SOHN was to reschedule his tour, instantly swooping in and making his show a part of the festival’s headline set-up. They certainly made a good choice in doing this, because Taylor’s hypnotic voice, pulsating beats and melancholic sonic combinations provided festival goers with the ultimate weekend kick-off. Set highlight Artifice saw the room erupt, before a closing rendition of Conrad sent 1200 satisfied visitors home with wide smiles on their faces. Taylor likely had a similar smile on his own face, knowing full well that he’d just pulled off a fantastic live performance alongside his live band. SOHN is a deserved list topper, having shown Motel Mozaique exactly what he’s made off and doing it in style, just as you’d expect. Motel Mozaique will return next year from 18 through 20 April. RSVP to the official Facebook event here so that you never miss a thing.