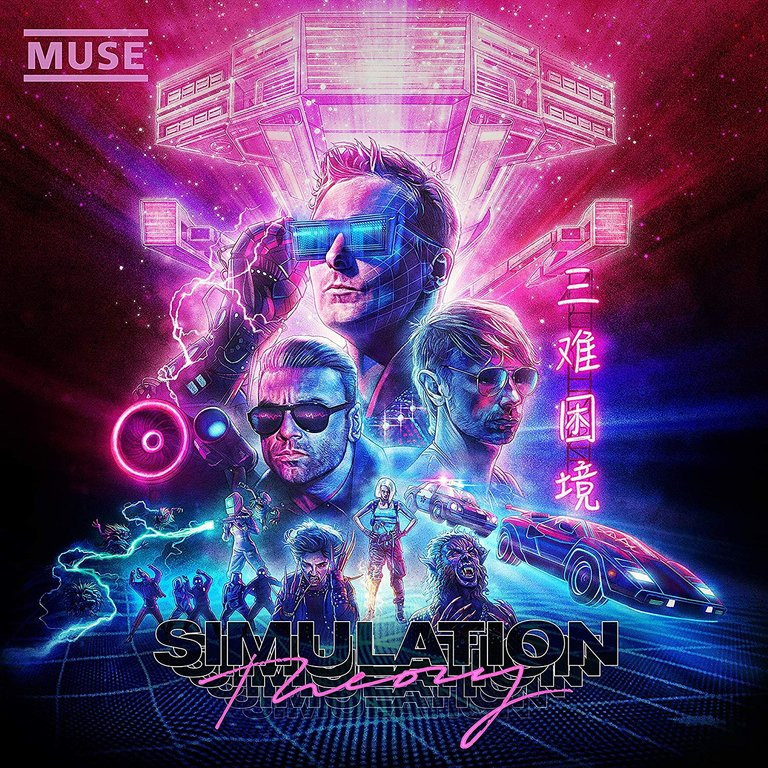 Muse Head Down a Digital Rabbit Hole on Simulation Theory

Do you remember the first time you heard a Muse song? Chances are you’ve probably been inundated with hit singles by the Teignmouth trio in your time on this planet, and chances are that you’re also divided on whether you like them or not. You see, that’s because Muse are the kind of band who have a knack for bringing out brilliant records which are either loved or loathed by fans and critics alike; there is little middle ground for Matt Bellamy and his band (drummer Dominic Howard and bassist Chris Wolstenholme). In the two decades since forming, they’ve gone from strength to strength both on and offstage, their repertoire growing exponentially whilst the sheer power of their live show only increases in size and scope. It’s thus not without good reason that Matt Bellamy and co. top “Best Live Band” lists year after year, especially when you consider the lengths they go to in putting on a show which is unique and grandiose more than anything else. Each album the band have put out since 2009’s The Resistance has seen them push out the boat even further from a performative perspective, with their live shows featuring alien spaceships, dancers, literal drones and every other unique invention under the sun. On new album Simulation Theory, Bellamy and his men ditch the rock bombast in favour of a Tron-heavy world which sounds like the perfect soundtrack to a neo-futuristic, anti-political video game. After one listen you can already visualise the endless possibilities which will accompany its supposedly expansive live show, something which is testament to Muse’s ability to bring out music which lends itself perfectly to the live stage. It’s all fair and well to judge a band solely on their live show, but is Simulation Theory actually any good? In short, yes.

Simulation Theory sounds exactly like its name and colourful artwork (above) suggest: packed with wispy synths, dark and futuristic lyrical content (artificial intelligence being the main talking point) and lathered in slick production. For the first time in Muse’s history, the band joined forces with a handful of different producers, including Shellback, Timbaland, Mike Elizondo and longtime collaborator Rich Costey. All four bring their own unique approaches to the table, adding elements to the songs which you wouldn’t have considered hearing on previous Muse albums. Take brooding album opener Algorithm, for example. Over the course of four minutes, Bellamy and co. build up the tension much unlike they’ve ever done before: i.e. with a combination of grizzly synths, strings and programmed beats which hark back to 2006’s Take a Bow. It’s a powerful opener, Bellamy sounding at war with the world. “Push us aside and render us obsolete, this means war with your creator” he sings, and you can hear the intent in his voice as he delivers these missives. Artificial intelligence rests at the core of Algorithm, and it’s a topic which rears its head across the entire album. Sure, Muse are no stranger to synths, but there’s something about the way they’ve approached them on Simulation Theory which gives it the edge over previous attempts. This time round, they feel more like a necessity than an accessory. Previous single The Dark Side demonstrates this equally so, and it’s probably the one track on Simulation Theory which sounds like old school Muse. Bellamy’s vocals intertwine with brash instrumentation, his voiced wails harking back to 2001’s Origin of Symmetry and 2003’s Absolution. “I have lived in darkness. For all my life, I’ve been pursued” he sings during the opening verse, his tone most emotive during the track’s larger than life chorus. Pressure ditches bombastic choruses in favour of an almost danceable rhythm, something spearheaded by a fuzzy guitar line, pulsating rhythmic passages and prominent brass. All three tracks serve as a strong opening salvo for Simulation Theory, an album which sets the bar high and rarely falters.

There are duds, though, of course. Just not that many. The RnB-tinged Propaganda (produced by Timbaland) employs sultry beats as Bellamy intertwines political undertones with personal musings, whilst Break It To Me throws fuzzier guitar tones into the mix alongside faux-oriental vocal lines and more RnB-tinged percussion. This is Muse at their most experimental, and it definitely pays off. Break It To Me is the kind of song which will soon grow to become a fan favourite thanks to its experimental nature. There are pounding percussive offshoots, a Kaoss Pad-centric solo and Vocoder vocals, and they all intertwine to form an incendiary end product. It sounds nothing and everything like Muse, something which is part of the trio’s irresistible sonic charm. Something Human is the first dud on the album, even if it does sound better within the context of the album than it did as a standalone single. “10,000 miles left on the road, five hundred hours till I’m home” sings Bellamy on perhaps one of the most personal songs he’s ever written, although his fragility is sometimes overpowered by the track’s tight production. Fellow single Thought Contagion doubles up as the heaviest track on the album, and it’s essentially Muse at their most, you know, Muse-y. There’s a killer riff, chanted chorus vocals and Wolstenholme’s classic gritty bass, and they all make for what is surely one of the band’s best songs from the last ten years. Get Up and Fight is much the opposite, although it ought to be noted that every Muse album has a song which just isn’t quite as memorable at the rest. It’s a bona fide radio hit in the making, but other than that there isn’t an awful lot about Get Up and Fight to get excited about. Yes, it’s decent at best (welcome back, falsetto), but we all know that Muse can do better. Which is a shame, because it was definitely one of the track titles which had the biggest potential to be some big, sprawling epic (and not a radio-friendly pop rock track).

Where Get Up and Fight falters, it’s safe to say that Blockades most definitely succeeds. “I’ve never felt so alive” proclaims Bellamy as an arpeggio synth kicks off proceedings alongside clattering rhythms and fuzzed out guitars. The chorus is dark, brooding and majestic, just as you’d expect from a band who thrive on grandiosity. “Be the best, and fight for your life” declares Bellamy with utmost intent, and you can hear the emotion in his voice more so than ever before. This is exactly the kind of song which represents Simulation Theory’s strong points, and there’s no denying that it’ll be a highlight on next year’s tours. Penultimate track Dig Down was the first one we heard from Simulation Theory, all the way back in the summer of 2017 and long before an album seemed to be incoming. There are similarities to 2012’s well-received Madness in Wolstenholme’s use of a touchpad-equipped Kitara bass, with the chorus bearing uncanny resemblance to George Michael’s Faith (something even more evident on the deluxe gospel version). Just as with Something Human, Dig Down makes a lot more sense within the context of Simulation Theory. That’s not to say it’s a bad track, though; it’s just the modern day equivalent of a by-numbers Muse slow-burner (see: Madness, Dead Inside). Simulation Theory comes to a close on the melancholic The Void, which is yet another highlight. Bellamy’s voice is underpinned by buzzsaw synths straight out of Tron, and they do a great job in accompanying his demure tone as he muses about the potential downfall of artificial intelligence as we slowly find ourselves embedded with a potential simulation. As album closers go, it’s one of Muse’s darkest to date, something emphasised ever more so by its closing piano lines. It’s a shame that the piano doesn’t make as much of an appearance on Simulation Theory as it does on prior releases, but within the context of the album it also makes sense for Bellamy to ditch his beloved second instrument.

Muse aren’t the kind of band who are afraid to shy away from attempts at evolving their sonic palette. It hasn’t always paid off, but you do have to commend Matt Bellamy and co. for never releasing the same album twice. Albeit far removed from the sounds which put them on the map, Simulation Theory is a breath of fresh air for Teignmouth’s finest, allowing them to operate on a new, slick and synth-heavy wavelength which sounds familiar enough to pre-2018 Muse to sit well alongside their wider discography, whilst still sounding like nothing they’ve ever done before. It’s the kind of record which will definitely take some getting used to if you’re a diehard, but at the same time it’s an album which lyrically puts Bellamy at his most fragile all the while exploring a futuristic modern world which could be as much of a potential reality as it is an intriguing element of science fiction. You either love or hate Muse, but on Simulation Theory it’s safe to say that they’re going to appeal to a whole new audience who wouldn’t have given them a second thought on previous releases. Simulation Theory comes out on Friday, 9 November via Warner Music.