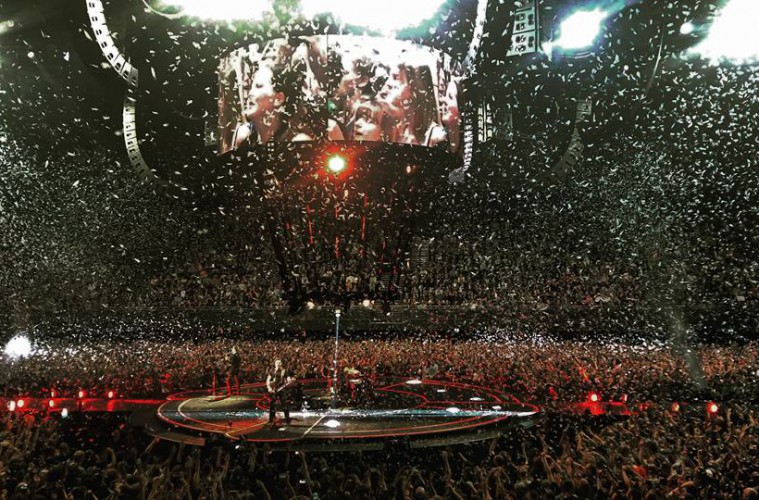 When Matt Bellamy initially outlined the concept for Muse’s 2015 opus Drones, many people must have perceived him as some kind of madman who had finally thought up his most off-the-wall idea yet. The album, which centres on a character who (long story short) is under control and breaks free from his ‘master’, is Muse’s finest and most refined studio concept to date. How would you transfer such a record to the stage, though? By putting the band in the middle of the whole arena and letting the show’s visual aspect take you on a ride, of course. It’ll come as no surprise that the live show actually came before the record, with Bellamy thinking up an album to support his grandiosity. The Teignmouth trio are currently undertaking a Drones World Tour, with last night marking the first of three sold out shows at Amsterdam’s Ziggo Dome. Nothing But Thieves came along for the ride.

Nothing But Thieves, who released their self-titled debut album last year, have spent the best part of 18 months exercising their powerful live ritual in front of steadily growing crowds. What started off as playing for 300-odd people has now morphed into pulling off arena sets in front of upwards of 10,000 people. And quite rightly so, because Nothing But Thieves are an incendiary live force to be reckoned with. Having rescheduled big chunks of their European tour to join Muse has certainly paid off, with set opener Itch hitting Amsterdam in all the right places. The band continued to draw from their debut record over the course of seven songs, climaxing in a sublime Trip Switch, before the raucous Ban All the Music (as well as earlier cut Painkiller) demonstrated the band’s heavier undertones. Frontman Conor Mason has one hell of a voice, standing out head and shoulders above most of his modern day contemporaries. Muse couldn’t have picked anyone better to take out on tour with them, because Nothing But Thieves present the exact same potential which Bellamy and co. had back at the start of the 2000s. Who knows what we’ll hear from Nothing But Thieves in ten years’ time, but it’s sure to be exciting.

Muse followed some 45 minutes later, with their spectacular stage show being the absolute focal point of the whole evening. Taking hints from U2’s 360 tour (which Muse made out a part of in the US), the stage sees the band on a circular rotating platform in the middle of the crowd, with two lengthy catwalk risers flanking them on each side. Above the stage, remote-controlled drones fly through the air as projected screens fall down from the ceiling to show beautiful, conceptual visuals. All of this is, combined with Muse’s already grandiose music, makes for what is sure to be the live event of 2016. Ennio Morricone’s Dance of the Knights echoed through the Ziggo Dome initially, with some 20 actors dressed as futuristic military flanking the stage like some sort of modern day security. As they left, the lights blacked out and Drones’ acapella closing track of the same name accompanied a flight of drones which careered throughout the arena. Once the Drones had landed, Muse ran on and kicked straight into the in-your-face Psycho. “You fucking psycho!” screamed some 17,000 people as Bellamy and co. (drummer Dom Howard and bassist Chris Wolstenholme) kicked into a forceful riff which dates back to Muse’s early days. Psycho is a dream set opener, encompassing everything which makes Muse great – Bellamy’s killer vocals, a menacing riff and chaotic closing. Origin of Symmetry single Bliss followed, carrying with it an extended outro complete with grandeur and bombast. This bombast was carried on into Dead Inside, an 80s-tinged Drones stomper. Although laced with synth wobbles and electronic drums, Dead Inside is still a relatively dark song. The final part of the song is more hopeful and emotional, leaving little to the imagination thanks to pressing on-screen visuals.

Muse’s diehard fans were somewhat satisfied throughout the show, with 2001 fan favourite Citizen Erased making for a highlight of the night. The seven-minute epic flitters from gritty riffs through to atmospheric verses, complete with a ballad-esque outro. “And I’ll see all I ever need” sings Bellamy at the track’s close as the piano he’s seated behind descends into darkness under the stage. It makes for the next ‘gimmick’ of the evening – The 2nd Law: Isolated System (taken from 2012’s The 2nd Law). Although gimmick could be considered a harsh word in this sense, it’s important to know that these things make a Muse show the spectacle they are. From an opening drone flight sequence to instrumental interludes such as this one, gimmicky segments only add to the wonder of a Muse show. As Bellamy and Wolstenholme re-join Howard and live musician Morgan Nicholls, they kick in to Drones highlight The Handler. It’s the best track on the latest record, encompassing dark riffs, Bellamy’s howling falsetto and an outro akin to debut album Showbiz’s title track. “You will never own me again!” shouts Bellamy, his declaration echoing that of the Drones protagonist breaking free from capture. Resistance, taken from 2009’s record of the same name, is an anthemic prog-rock track centred on an eerie piano melody, before smash hit Supermassive Black Hole brings some RnB groove to the table. Sampling an intro from Jimi Hendrix’s Voodoo Child, Supermassive Black Hole was an unorthodox hit for Muse. It nevertheless made for a show highlight, with the occasionally stagnant crowd finally starting to loosen up. It came in the middle of a three-song long hits salvo which the poppy rock anthem Starlight completed. “Our hopes and expectations, black holes & revelations” sang the whole arena at Bellamy’s command, a man who time and time again reinforces his immense frontman abilities. Crowd discussion may be on the down low as per usual, but his instrumental skill and vocal flexibility both add up to create the perfect musical genius. A mad one, at that.

As the show heads for its conceptual peak, United States of Eurasia reinforces the totalitarian viewpoints Matt Bellamy likes to inject into his music. The piano-driven, Queen-esque banger is a standout track from 2009’s The Resistance, still receiving the odd performance every now and then. The instrumental Munich Jam followed, firmly placing the spotlight on Howard and Wolstenholme’s rhythmic expertise for a couple of minutes, before Bellamy returned for the electro pop ballad Madness. It’s another example of Muse’s ability to slow things down and ramp up the emotional energy, wiping away everyone’s tears straight away by projecting a famous JFK speech to the circular centre screen. The sampled speech features on Drones, and live it preceded most recent single Revolt. It’s a song about the Drones protagonist rising up and fighting back, even though it’s laced with a catchy radio rock chorus and Queen-like backing vocals. Time is Running Out still sounds as fresh as ever, with anti-authority anthem Uprising still making for one of the best songs Muse have ever put out. Combined with an extended, shredding-centric outro, Uprising is Muse’s #1 anthem and a song which most people can relate to on some wavelength. The main set closed on what is by far Bellamy’s biggest attempt at grandiosity – The Globalist. Spanning ten minutes in length, the track first hits you with Morricone-style Western whistles, before a manic hard rock mid-section saw a huge zeppelin fly through the arena. It’s meant to represent a massive drone patrolling the world, flying around the stage during The Globalist’s thrilling countdown section. The final part of the song sounds like a re-hashed United States of Eurasia, but bigger and more emphatic. Album closer Drones returned again, echoing through the speakers as drones flew once more. The band opened a three-song encore with fan favourite Take a Bow, which focuses heavily on synthesizers and warbling electronic grandiosity, before 2015 single Mercy made for a confetti-laden moment of euphoria. “Show me mercy from the powers that be” declared Bellamy, with the track’s build-up exploding in a combination of confetti and streamers. As per usual, the whole evening ended on Knights of Cydonia, Muse’s crowning rock glory. From its dominating Western-undertones to its raucous rock outro, Knights of Cydonia is a show closer any other band could only ever dream of writing. This song alone proves that the whole Muse experience is worth every single penny, especially when you consider all the manpower that goes into this massive production. Over 18 months of preparation and design went into the stage, one which takes 10 hours to build up and almost half as long to break down. Although Muse alone on a stage would still have the same musical impact, the production which surrounds them makes everything ten times better than what it already is. Muse are, and likely always will be, one of the greatest and most innovative rock bands of our generation, and they’re only going to keep getting better.

Muse will play two further shows in Amsterdam on 9 & 10 March, before headlining Lowlands Festival in August. All pictures were taken from Instagram due to the strict photo contract which Muse’s management offers.