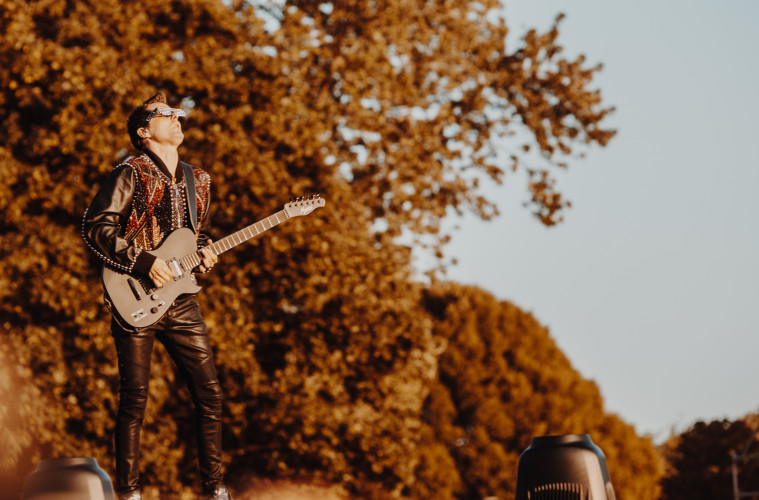 Muse Are Still the Kings of the Stadium Tour, Even in a Field

Algorithm. A word which carries so much meaning in 2019. Not only is it the way in which Spotify and other streaming platforms figure out what the hell you like to listen to, but also the way which largely determines the way in which we interact with technology. It’s also a word which Muse frontman Matt Bellamy has aligned himself with so heavily, in particular for the recording process surrounding new album Simulation Theory. It’s an album which – as you may have anticipated – centres largely on modern tech and its implications on society, both good and bad. Bellamy likes to focus on a mix of said good and bad, fusing it with the utopian. This conceptual extravaganza feeds into his band’s current live show, one which rolled into a sold-out Goffertpark in Nijmegen this evening. 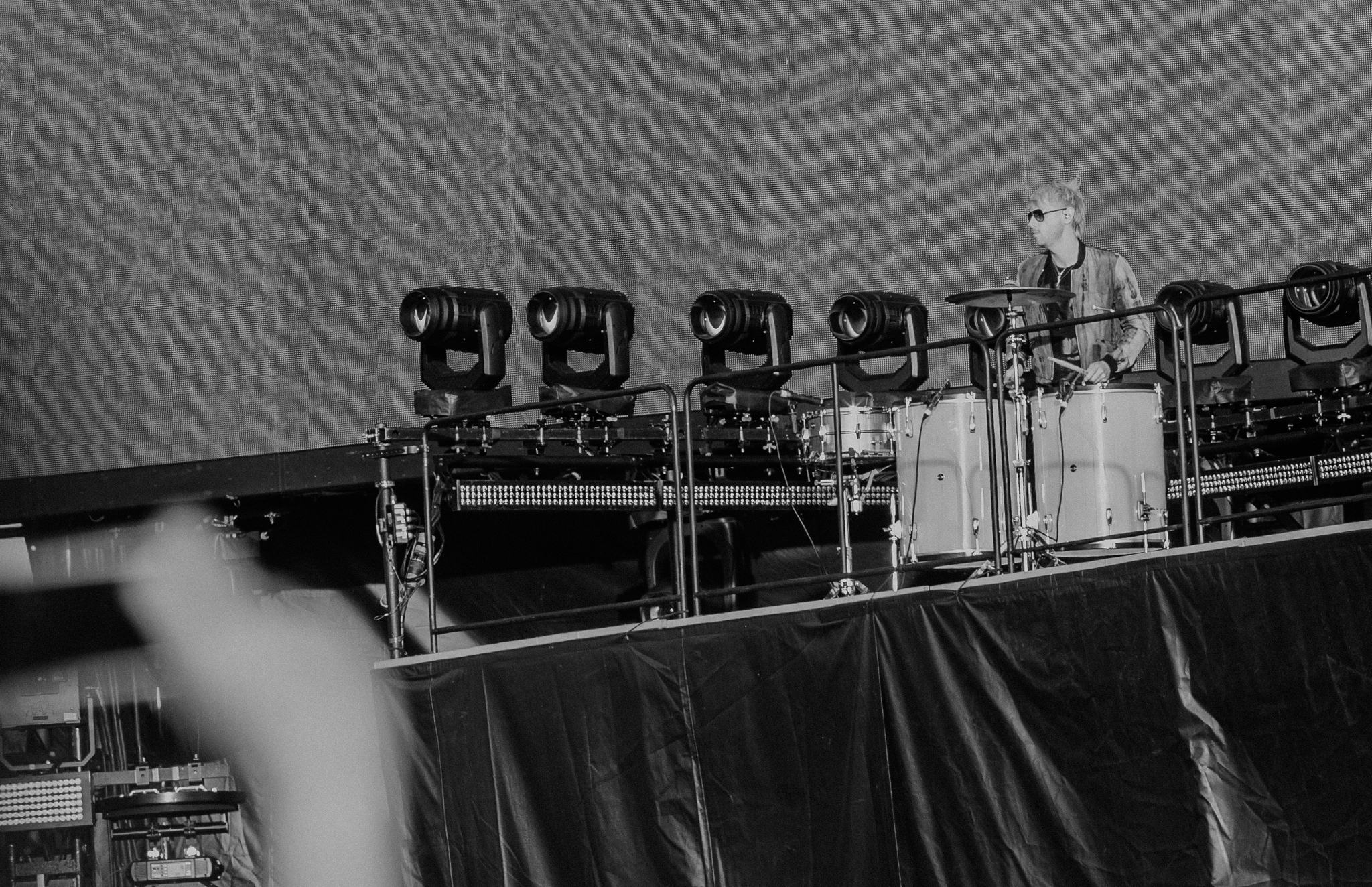 As with everything Muse do nowadays, the ongoing Simulation Theory tour (after the eponymous 2018 release) is another case of above-and-beyond wonder, encompassing enormous video screens, dancers, pyro and every single hit you could possibly think of. In the past, the Teignmouth trio (completed by drummer Dom Howard and bassist Chris Wolstenholme) have embraced pyramids, towers and 360 degrees stages, and although tonight’s stage doesn’t reach those heights, it’s still one hell of a sight to behold. Just take the dancers as a prime example of this; seldom have Muse embraced dance during a live show as much as they have tonight, and the effort shows. Opener Algorithm (the Alternate Reality Version, albeit) showcases this well, with a futuristic dance troupe surrounding Bellamy as he emerges from the bottom of a lengthy catwalk. The sun is still out, and the crowd are as talkative as ever (they remained so; see: the Dutch Disease), but it instantly became clear that Muse were here to conquer Nijmegen some nine years after their last appearance in the leafy city. Pressure allows the dancers to don fake horns, before Psycho elicits the first ‘major’ crowd response of the night. Its recognisable riff and subsequent breakdown has long been a favourite among Muse fans, with tonight’s reception testament to this fact. The newer, Arabic-tinged Break It To Me allowed the bar to remain highly set, enabling Bellamy to whack out some obscure chords and niche melodies within the confines of a carefully constructed Muse song. It served as the closing piece in a four song opening salvo, one which set the bar incredibly high. 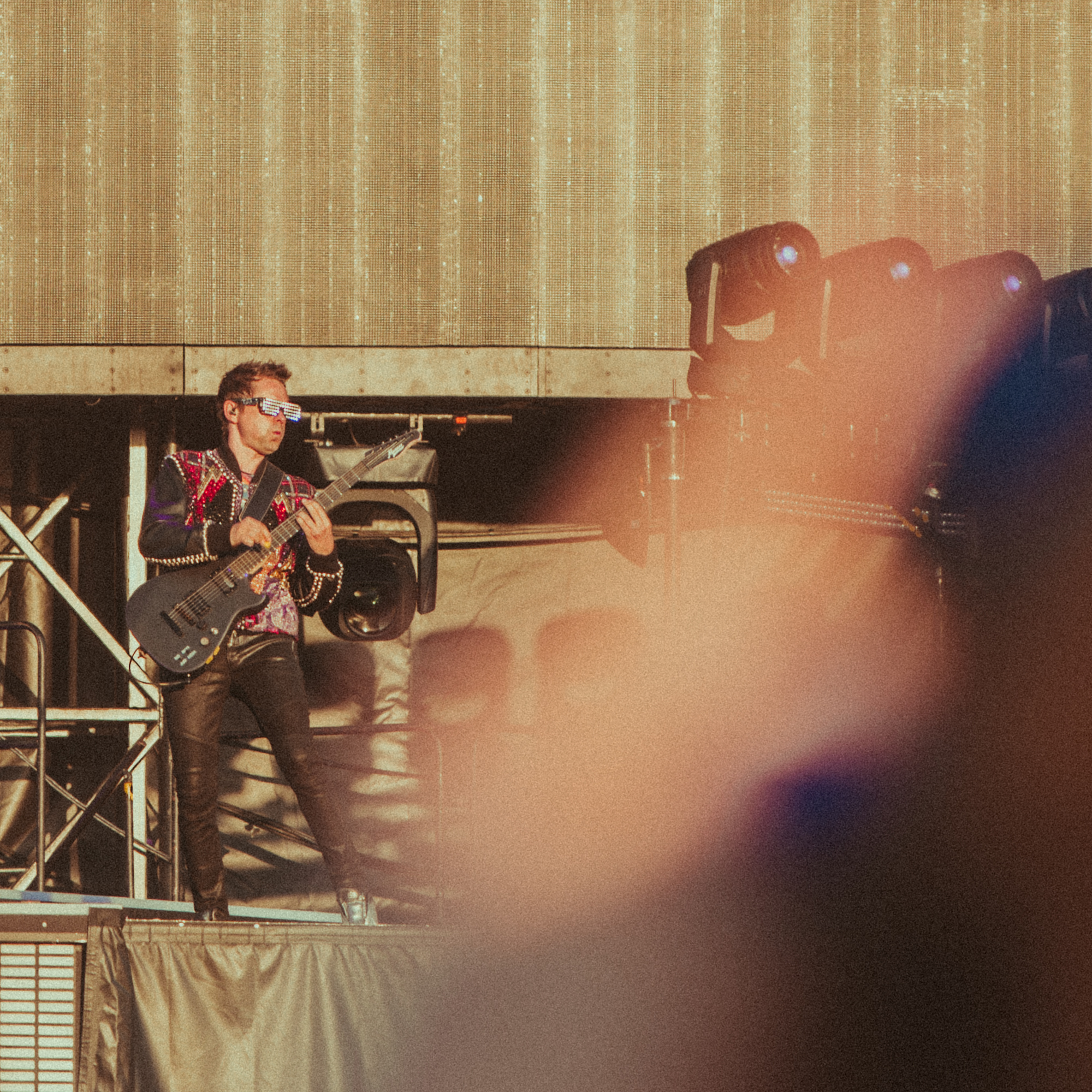 Much like a first date, the start of a stadium show often feel like setting the bar high for your own good. First you have to be of interest to the opposite party, and then you have to maintain that interest by putting on your best display. In Muse’s case, this was the triple-whammy of smash hit Uprising, RnB banger Propaganda and cult classic Plug in Baby. Each track is wildly different from the other, but each possesses so much classic Muse that it almost becomes impossible to avoid its catchy impact. Uprising’s riffs are as infectious as every single disease you can think of, whereas Plug in Baby is simply just the ultimate Muse song. Like everything they do, it hits hard and it’s special. The Nijmegen crowd seemed to be relatively receptive of the band’s every movie, even if the back half of the field found more interest in conversing amongst one another. The Dark Side provided a hefty dose of 80s synths, before Supermassive Black Hole woke up the field with its gritty riff and combination of falsetto-d vocals and wispy synths. It’s one of Muse’s biggest hits, and there should be little reason to wonder why. The same ought to go for Thought Contagion, which seems to have taken a bit longer to warm on Muse fans than it deserves. Much like 2015’s The Handler (which appears as part of a later medley), it’s got a forceful riff, memorable vocals and pulsating rhythms. Hysteria, though, evokes a particularly special response from the continent, for it serves as the moment that phones disappear from hands and lungs erupt in voice. Hits, eh? 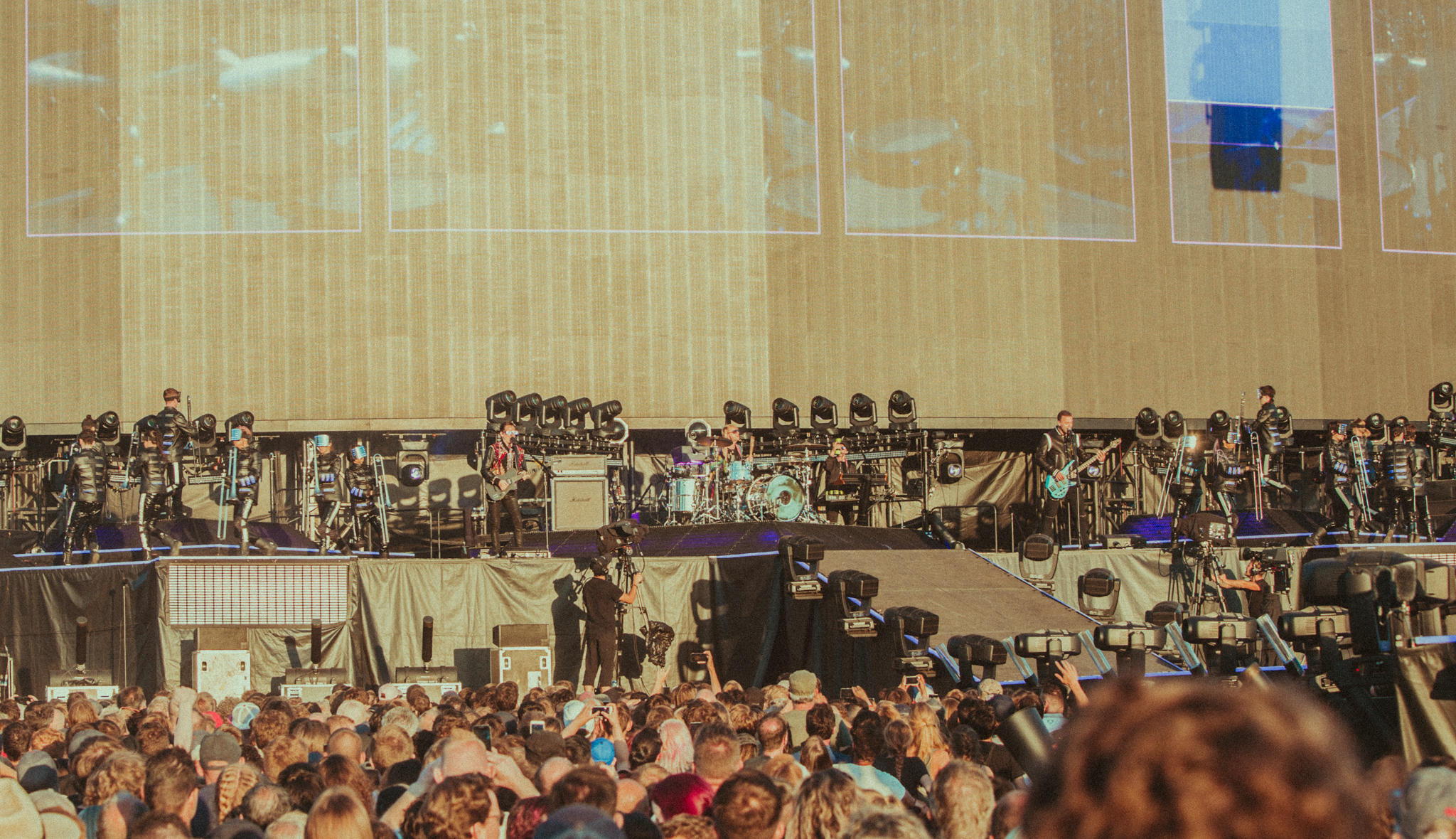 The second half of the show proved to be just as powerful as the first, featuring a dub-worthy rendition of The 2nd Law: Unsustainable, followed swiftly by Dig Down’s lilting gospel tones and Madness’s warbled synths. Mercy threw some confetti in the mix, marking another memorable moment in the show which allowed for the crowd to chant along, much like the classic Time Is Running Out. It’s one of Muse’s most recognisable pieces of music, boasting a gigantic chorus and momentous riff salvo, something which continues on into the bass and drum jam which followed. Said jam featured a slew of older Muse songs, as opposed to a brand new riff as per previous tours. Futurism, Unnatural Selection and Micro Cuts – all longstanding favourites – served as the basis of this jam, one which served as a stopgap between Time Is Running Out and the subsequent Take A Bow, undoubtedly one of Muse’s best songs. Its arpeggiating synths are wondrous, as are Bellamy’s wailed vocals. It’s the kind of song which keeps you longing for more, and it does the trick pretty well. It took a while for the crowd to get back into the show after a somewhat disruptive (to them) jam, but Starlight managed to keep the vibe heading in the right direction as it preceded the original version of Algorithm. Repeating the same song twice could be considered a no-go, but Muse manage to pull it off in such a way that no one really bats an eyelid. 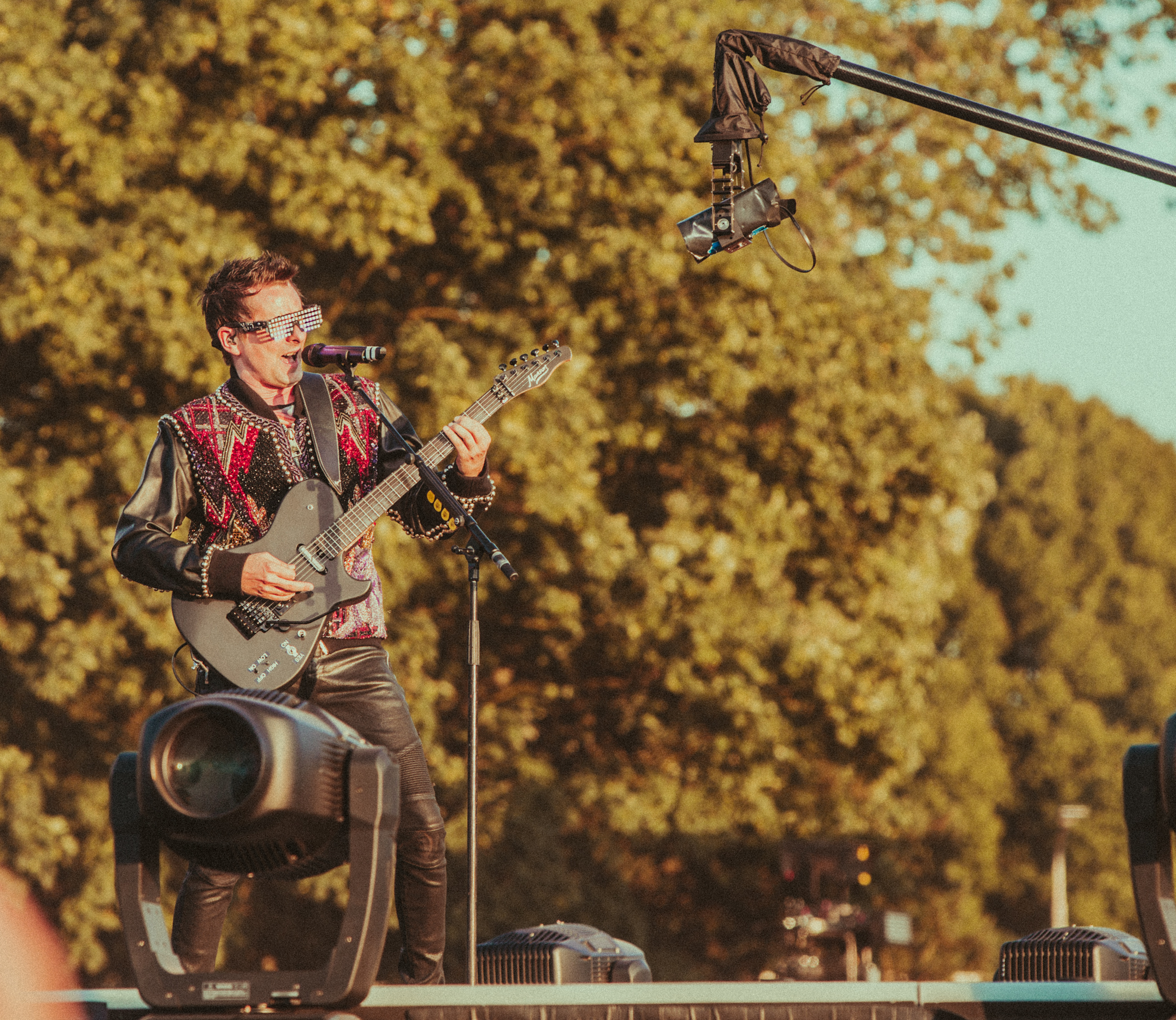 The final segment of the show featured another medley, this one far more fleshed out and featuring the inclusion of metallic monster Murph, a stage prop which has fast become an immense fan favourite. As Murphy’s claw travels across the stage, Bellamy and co. manage to merge five immense bangers into one fifteen minute rendition: Stockholm Syndrome, Assassin, Reapers, The Handler and New Born. All momentous songs in their own right, but even better when merged as one cohesive whole. As the field slowly emptied, Muse did have one more trick up their sleeve: Knights of Cydonia. Complete with its standard Man With A Harmonica intro, Muse turned Nijmegen into an absolutely riff-laden frenzy fit for a king, chucking as much as they could into the mix before eventually leaving the stage to rapturous cheers. The sun may have have only just started setting as the band left the stage, but that took absolutely nothing away from the sheer and immense power of what Muse had just pulled off. It may have been in a field, but Muse will forever and always be the kings of the stadium show.