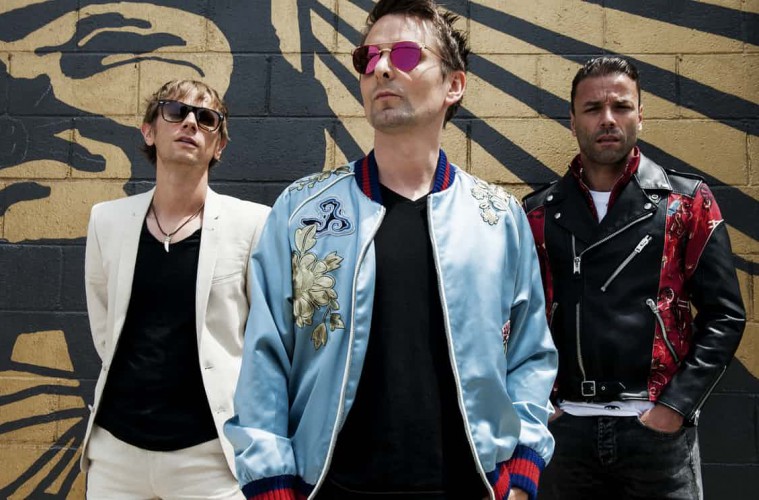 Earlier today, Muse‘s Matt Bellamy and Dominic Howard sat down with The Guardian to answer fan questions covering a multitude of intriguing topics. The chat, which was in support of new single Thought Contagion, saw the pair shed some light on future developments, divulge on outer space and take on some trivial subject matter. We’ve picked the best bits from their chat.

…ON THEIR FAVOURITE NEW BANDS
Speaking of new music he enjoys, drummer Howard says: “I like that band Judah and the Lion. I heard some artist, I think a bit of a solo act, called Grandson, the other day, and it sounds a bit like weird, heavier Twenty One Pilots, Nine Inch Nails kinda thing, sounds cool. He’s literally just released a few singles”. Bellamy adds that he likes Pale Waves.

…ON OUTER SPACE
Muse frontman Matt Bellamy is most definitely a space enthusiast, with one fan asking him what fascinates him so much about it. He says: “How could anyone not be fascinated by outer space?! I mean, it’s so vast and so crazy and strange, it challenges our logic and what we think, how we came to be. What I’m particularly fascinated by is where the universe came from and what it’s constructed of – these are wild questions to think about. I’m particularly interested in what people like Einstein and other physicists and biophysicists are trying to find out what the algorithmic nature of the universe is, to break it down into maths – what is it? And what I’m fascinated by is when that theory is revealed, we’ll essentially be seeing a programme of sorts – the possibility that the universe is a programme of some kind, I find that to be fascinating. The way that people understand the universe is through pure maths and they’re starting to see a set of rules that if you follow, a universe will come out of it. I’m fascinated by where that comes from.”

…ON NEW SINGLE THOUGHT CONTAGION’S LYRICAL INFLUENCE
After one fan asked Bellamy if the US presidential election influenced Thought Contagion’s lyrics, he responded with a detailed explanation. He writes: “Probably influenced a bit by the endless news coverage in the US about that – when you watch CNN or MSNBC, all you see is Trump 24-7, it’s like they’re not interested in anything else. Was the song influenced by that? I mean, it’s probably more influenced by Richard Dawkins’ original idea of what he described as a meme, even though that word has changed meaning over time. How he originally meant is was to describe when somebody else’s ideas or beliefs, regardless of validity or accuracy, can have a way of spreading around like genes do, growing in each other’s minds and surviving. Certain ideas are very robust the way genes are robust. He was trying to find a way to describe how thoughts can be contagious and spread and have strength and grow in the way genes do through evolution. And unfortunately it’s particularly true for the people who don’t want empirical evidence applied to their belief systems – and they tend to be the most fervent. Sometimes those belief systems are the ones who spread the most.” …ON WHICH LIVE MOMENTS THEY CHERISH THE MOST
Muse shows are often considered a multi-sensory experience, something which shouldn’t surprise you considering their high production values. Speaking of a moment which always gets him going, drummer Howard says: “There’s probably some key musical moments in the set that are always exciting, like we played Knights of Cydonia at the end of the set for years now because it seems to be the best closer, that bit at the end where it builds up – that’s always exciting because the crowd always kick off and react, and it’s exciting to see what they’re gonna do when it drops”. Bellamy adds that the excitement and initial nervousness always riles him up.

…ON THEIR FAVOURITE OWN ARTWORK
The general consensus on this question is that 2003 album Absolution has the band’s most favoured artwork. Howard puts it so: “One of my favourites is Absolution. We did quite a few bits of artwork with Storm Thorgerson, a pretty well known, respected artist who sadly passed away. And he was an interesting guy – very opinionated but always had crazy, surreal ideas and I always thought Absolution really conjured up something. You looked at it and didn’t know what was going on with the people flying above.” …ON READING THEIR (IN)FAMOUS MESSAGEBOARD
Muse’s dedicated fanbase are known to be a critical bunch, something which Howard and Bellamy are well aware of. As Bellamy sums up: “I used to [read it] back when they liked us but zoned out after everyone slagged off Supermassive Black Hole!” Howard adds that he used to frequent it due to their fans’ knack of gathering up and publishing interesting statistics and fans about the band.

…AND ON WHAT WE CAN EXPECT FROM THEIR NEW ALBUM
Muse are expected to release a new album “either later this year or early next year”. Speaking of the record, Bellamy said: “It’s gonna be varied, definitely, but I wouldn’t necessarily call it experimental. The 2nd Law was a very experimental album. We’re hoping to end up with 10 or 12 great songs that are all varied in style but sound good. We’ll be doing lots of genre-blending and era-blending.”

Read the entire chat here. Thought Contagion is out now, and you can watch the video for it below.