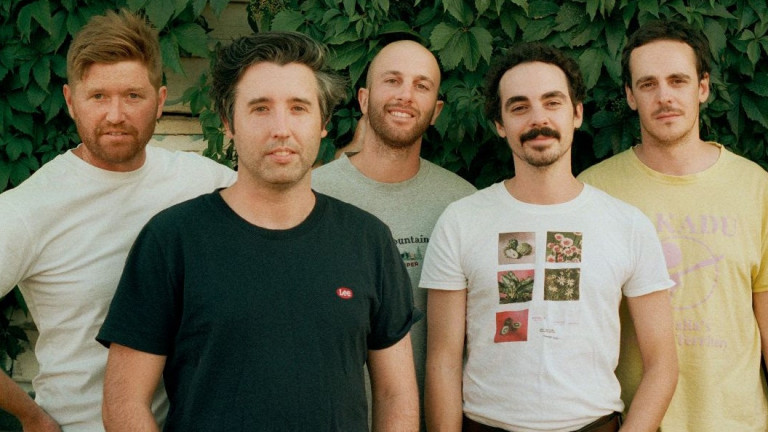 Next week, Rolling Blackouts Coastal Fever will put out their hotly anticipated sophomore record Sideways to New Italy. Although the follow-up to 2018’s Hope Downs sees Fran Keaney and co. stay firmly grounded in their buzzing indie rock roots, there are fleeting moments of curiosity (aka “going sideways”) which make it a thrilling listen from start to finish. Jack Parker called up Keaney to discuss the ins and outs of this year’s most exciting indie release.

Hey Fran. How have you been keeping productive in isolation?
I’ve been moving house, moving into a new little crawl space. That’s been alright. I’ve not been particularly creative lately, I just picked the guitar up again recently. It’s nice to do it just for fun and have there be no real meaning to it; everything is so unknown at the moment so there’s no consequences for writing anything. That’s pretty good. I also did a lot of cooking.

It’s been a couple years since we heard new music from Rolling Blackouts Coastal Fever. Were you able to unwind at all before you moved onto writing again?
Not really to be honest. We began to work when we got home, and we started rehearsing in November 2018. We then wrote until May 2019 and took a break to do some more touring last summer; we got back in August and then worked on the album four days a week, finishing everything until we got down to recording in November. Right now is the first time we’ve really been able to unwind at all.

What about the album process itself?
We made a rule that we would bring any part or fully formed ideas to each other so that we could pull the ideas apart. That led to songs which we took down a path until we hated it, but it also led to songs which we took down a path, had an accident with and then liked. Some songs really deviated, and some we took on very long journeys which meant that the writing took quite a while. We followed every rabbit down every hole, which is something we’ve always wanted to do. We really wanted to put our own stamp on the album, something that was written by all five of us. It was definitely a labour-intensive process.

Your new album, Sideways to New Italy, comes out this summer. Were you at all apprehensive about releasing it just as the world slows down?
We did talk about pushing it back, but we all really wanted to get it out there. The idea of saving it for later felt a bit weird. I know that we all really enjoy listening to music at the moment, so we also just wanted to put something out for people to listen to. It’s not a good time to tour right now, but I do feel like it’s a good time to listen to music. Nobody knows what’s right, of course, but if people like it then they will connect with it. By the time touring rolls around again in 2021, people will hopefully know the album inside out which can then be a good thing. I don’t know, there are so many uncertainties which is why I suppose holding it off made no sense. We don’t even know until when we’d have to hold it off if we did.

How much did all of the touring for Hope Downs influence the direction you took on the new album?
I think just that we’ve gotten tighter together. We played so much that we’re a very well oiled machine now, and we can do things which we weren’t able to do before. The fact that having played together for so long makes us really tight is mainly it. As I was saying, the idea of all five of us writing the album rather than just one person let us flesh everything out better too. Playing together for so long also helped in us all writing the music together.

Burke Reid produced the album. What did he bring to the table from a production side?
He just works really, really hard. He’s obsessive, and he really likes pop. He wants to make songs which you’d hear the essence of in the next room. I suppose discipline is something he really brought to this album too. We really wanted to scatter it and let the songs take left turns and do whatever they wanted to, but when he came in he said that he could hear a good album in there somewhere but didn’t think we should break the rules as much as we were. He wants to be able to enjoy the music first time round and not have it be something he wants to sit with for a long time. Which is funny, because that’s exactly the opposite of what we’d been talking about doing. He came in and told us to unfuck songs, and he helped us. Obviously we didn’t go with all of his suggestions, but he was pretty convincing in telling us that a song could be better and that we could unfuck certain bits here or there. He very much emphasised the pop and discipline of it all. I think the album still pops quite a bit, which we’re really happy with, but it also does go sideways and a little bit more off-kilter than some of the stuff we’ve done before.

Did you feel any pressure at all from the so-called second album syndrome?
We definitely put pressure on ourselves, and we worked really hard, but I don’t think there’s in a sense in our band that we need it to be really successful, because that’s not what we started doing it for in the first place. It’s not about money or success for us, and we don’t like the spotlight either. We just like writing songs and playing together! It’s not about making truckloads of cash in that sense. Like, what is there to lose? But yeah, we did put a lot of pressure on ourselves because we wanted the album to be the best thing we’d ever put out.

Did you have stuff written on tour? Or was it mainly written at home in Australia?
It’s hard to finish songs on the road, but we did get ideas on the road which we started exploring when we came back home. For example, we first played Cars in Space during a soundcheck in Liverpool. Tom showed me the song Falling Thunder in the tour van somewhere in Denmark after we’d played at Roskilde Festival, and the song The Only One was initially called Deep Slough, like Slough in England. It had a real Slough vibe, and it was written on an iPhone using GarageBand. It was a dirty dancefloor song which didn’t sound like us at all – Joe had written it for fun – but we liked the chords and rhythms so we pulled it apart and made it what it is now. For the most part, though, we wrote the songs in Australia.

So how does Australia feed back into your image and sound?
I think it does have somewhat of an impact, the main reason being that it’s the kind of music we’ve listened to over the years. We listened to a lot of Australian music, and we always wanted to make that kind of music. Not in the sense of Aussie pride, but for example an 80s band like The Triffids made these cinematic songs which were set in Australia. There weren’t that many bands which made the Australian scene so exciting, but we’d always wanted to make something typically ‘Aus’ and exciting. Beyond that, though, it’s just osmosis and perhaps even the set up we have. A lot of pub rock bands in the 70s and 80s used acoustic guitars, it was very big at the time, and we also don’t use that many effects. It’s pretty straight up and down pub rock, our set up. Joe’s slowly expanding his pedal board, and we’re trying to change things a bit, but the set up we have by and large lends itself to an Aussie sound.

Tell me a little bit more about New Italy. Why did you incorporate it into the record?
New Italy is near where our drummer Marcel grew up. It’s a quaint little petrol station-slash-museum nowadays which serves as a monument to an old town called New Italy which was set up by Italian immigrants back in the 1880s. It’s a weird little replica of a Northern Italian town, and we liked the idea of it being a replica in time. We liked the feel of it, and when we threw ideas around I had this general idea of New Italy and this album being something that I could feel certain about. When you’re on tour you can lose that feeling of being centred, and you tend to lose that anchor. You have to discontinue a home, put stuff in boxes and then you don’t see your friends for a very long time. You lose a few things and you feel ungrounded. I wanted this album to be something you could be sure of, like creating a home in an uncertain place. I wanted to make a positive album.

What did you do on the road to fulfil any home comforts?
I don’t really know. It’s hard to, you just keep moving and you don’t stop. I think I was just starting to write songs and lyrics, and even after I came home it was this burning feeling in me to just write these forward-looking, positive songs and try to harness the chemistry in our band. I wanted to bottle up what it was that had gotten us so excited about being in the band, and get a little deeper into that and nail it down. It was that feeling of wanting to reach for something.

I see.
I was writing lyrics in the van whenever I had the chance. I don’t really write to people back home that much as it feels like a poor substitute for actual connection. Instead I just made the effort to connect with my friends when I got home, as I was just trying to write on tour. Sideways to New Italy is out on 5 June.