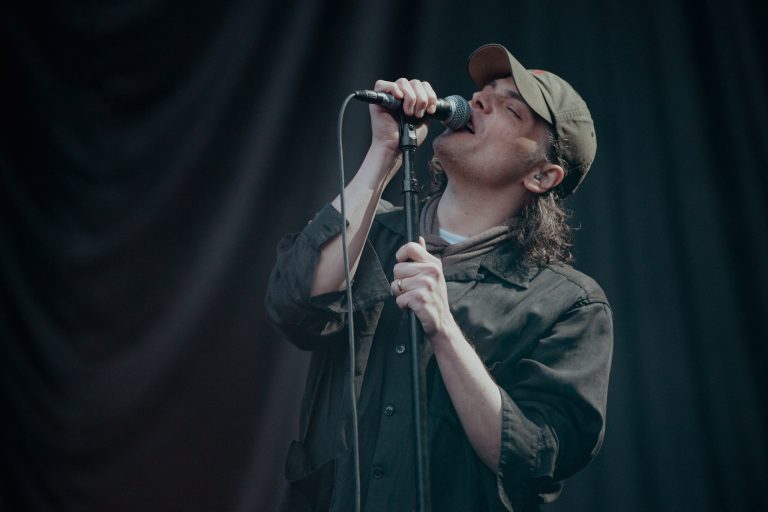 Embarking on their long awaited return tour, My Chemical Romance landed in the UK with a couple of shows in Cornwall and then on to Milton Keynes Stadium for three nearly sold out nights. An event lovingly dubbed the Emo Convention, MK floods with a sea of all black outfits, worn by old and young. When All Things Loud catches second show of the Milton Keynes run, Cassyette and Barns Courtney are opening for the band alongside main support Placebo.

Barns Courtney especially makes an impression with their grandiose stage presence and unique vocals. Placebo provides a reliably solid performance, warming the crowd up nicely for the big finale.

When My Chemical Romance finally march onto the stage, the band is clearly buzzing to be back performing. All of them keep flashing big smiles, and within the first ten minutes singer Gerard Way exclaims how much fun he’s been having on the previous shows and how good it feels to be back. He mentions later how hard the past two years have been for the band, which is met with loud screams of empathy.

The setlist starts off with the 6-minute long new release The Foundations of Decay, after which they unexpectedly hit the crowd with I’m Not Okay, a song usually reserved for later in the set. MCR have been mixing it up on the setlist pretty much every night since the tour has kicked off, so fans are in for a surprise at every turn. In tonight’s case, the band plays Bulletproof Heart for the first time since 2011, a song Gerard reveals was first called Trans Am before it was released on Danger Days.

One thing that’s clear during this lovely gig is that everyone in the stadium floor has missed My Chemical Romance dearly, for every square meter is filled with people screaming, dancing, crying and chanting. Gerard keeps an eye out for his fans in the first couple of rows, ordering the crowd to step back a few times and stopping the set to get people help. The night feels like a sweaty emo gig in a dark dingy venue, but then times a hundred. MCR haven’t lost their magic in the 9 years they’ve been gone and I doubt they ever will, because their fans clearly aren’t going anywhere. Check out more shots of the show below, taken by Anieck van Maaren.