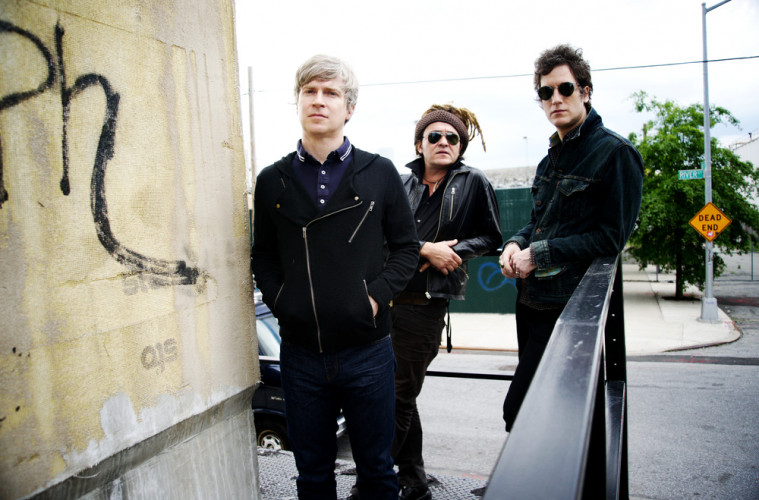 When bands do album anniversary tours, for some the choice is obvious. A break-through smash that rapidly expanded their fan base, or a creative milestone which took their craft to another level, there’s usually an obvious example of an album which seems inevitable. Nada Surf chose Let Go as their album to tour in full, fifteen years since its release. It was probably the album of theirs which received the greatest critical acclaim but was also the first album to follow them being unceremoniously dropped by Elektra. To many, they were that Popular band, a song whose cutting spoken word verse took a wild swing at American High School culture, capturing teenage angst in a novel yet palatable way. Despite the expectation for them to fizzle out at this point and disappear, the fact that they managed to come back with the strongest collection of songs of their career is probably the reason they felt this was the album to revisit.

The set was split into two halves, the first being the album played in its entirety and then, after a short break, a “best of” second set. Being their own support band, there were still people filtering into the room as Matthew Caws, Daniel Lorca and Ira Elliot took to the stage to play Blizzard of ’77. While Caws’s voice sounded as clear as ever, the complimentary harmonies of the other two were inaudible despite it being clear that Lorca & Elliot were giving it their all. It was a shaky start through no fault of the band, but the melodic stomp of The Way You Wear Your Head did more than enough to set things right.

Without a support act, it was a shame that the front-loaded track listing of Let Go meant that tracks like Blonde On Blonde and Inside Of Love are played so early in the set before the crowd had a chance to warm up properly. The renditions were beautiful and faithful to the originals though, beyond some gentle swaying and modest appreciation, the reaction was relatively muted despite the dulcet reproductions. With the band having had the same line-up since 1995, you wouldn’t get the impression that Caws was bored at all of playing these songs for however long he had, but the same wasn’t necessarily true for Lorca. While he never looked bored during the set, his reaction to playing songs like Killian’s Red was visually more engaged and physically reactive to the lines he had to play. Though it may have been harder for him to hide his true feelings, it was entertaining watching him finding creative new ways to play the bass on particularly simple lines, eschewing the right hand altogether at times, holding his guitar at awkward angles.

The band took a few opportunities to interact with the crowd between songs, whether it was Caws having to describe what a Discman was after a baffled response from the crowd when he described what Blonde On Blonde was about. Before beginning La Pour Ca, Lorca took the time to talk a little bit about the history of the band including how he met Caws at French school in New York, and how they were both in awe of Elliot’s previous band The Fuzztones and how they had to use phone books to track him down. It was a touching moment showing how well they all still got on with each other despite how long it had been. When I shouted out a request for 80 Windows, Lorca apologised that the last time they’d played it, he couldn’t remember it properly and fucked it up, so it wouldn’t be featuring that night. After Paper Boats played out the first set, there followed a 25-minute break before the best-of set began. With seven other studio albums to choose from, the band played a wide array of tracks from their back catalogue. With tracks like Teenage Dreams and What Is Your Secret?, the pace was considerably more upbeat. By the time they slipped a cover of Joy Division’s Love Will Tear Us Apart in there, the crowd were loose and moving.

As the final notes rang out of the best of set, shortly after an array of thanks for all those present including me for shouting out my 80 Windows request, an encore felt inevitable with the notable absence of a few key tracks. Moments after they left the stage, the band returned to play their breakthrough hit Popular, with the lights low until the chorus itself, shrouding Caws in a silhouette. Always Love swiftly followed before an interactive rendition of Blankest Year got the crowd to join in with a “Fuck It” shout-a-long. They say to finish on a high, and that’s exactly what they did. The band left the stage, Caws with acoustic still in hand as the lights came up, and the background music played again.

As the crowd piled out of the venue towards the merch stand or the cloakroom, Caws was already there with his guitar, trying to make his way through the crowd to stand up on the stairs in the corridor. It was at this moment that he unleashed a surprise final song with an acoustic rendition of 80 Windows played just metres from where I stood. It was a beautiful gift and one that showed just how much these guys still enjoy what they do and appreciate the audiences they have. As the final notes rang out, I cheered myself hoarse, the perfect end to a perfect setlist.