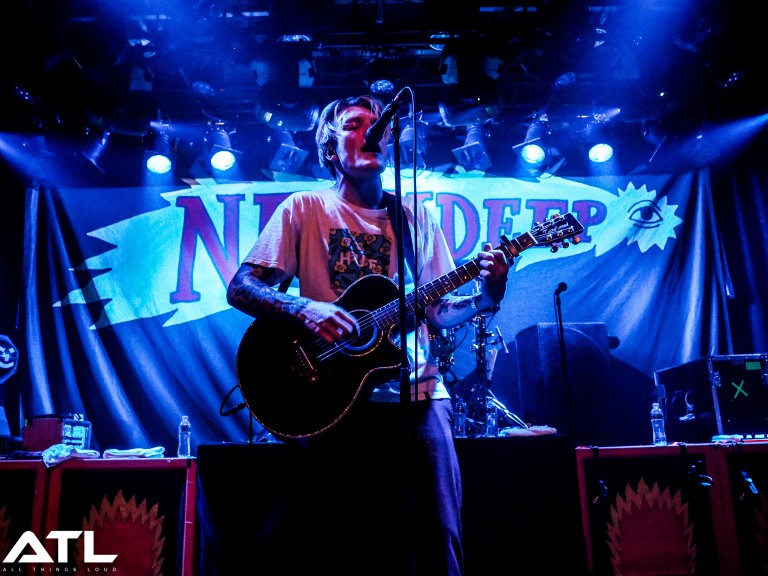 Upon walking in to the Melkweg’s abandoned Theaterzaal, we’re greeted enthusiastically by Neck Deep frontman Ben Barlow, who seems to have instantly remembered the two previous chats we had with one another ahead of shows in Utrecht and at Lowlands Festival. Alongside him sits guitarist Matt West, who’s wearing a beanie whilst Barlow dons a cap which partly conceals his red-eyed face. The pair are seated in black leather chairs which could make even the most energetic man fall asleep. Both Barlow and West are in tense anticipation of the sold-out Amsterdam crowd which will greet them six hours later downstairs, for which operatic emo’s Creeper and punkers WSTR will join them for. It’s a scorching Sunday, with the band currently touring in support of their equally-hot sophomore record Life’s Not Out to Get You, which charted in the UK Top 10 upon release last year.

The last time we sat down was before Life’s Not Out to Get You was even announced. Can you tell us more about what’s happened since then?
Ben: Wow, a lot. We’ve been on a world tour.

Matt: Which seems like something we’ve been doing for about four years now.

Ben: We’ve just been fucking everywhere, and we’re nearly at the end of it. It’s pretty crazy. The record did really, really well and it sold a good amount in the first week.

Matt: Way more than I thought it would do!

It charted too, right?
Matt: Yeah, number 8 in the UK which is absolutely obscene.

Ben: I never ever thought we’d do anything like that. We didn’t even consider that as a ‘thing’. We knew that it was gonna do well, though.

Matt: We were proud of it, but we didn’t think everybody else would go as wild for it as they did. It’s just been absolutely ridiculous.

Ben: Yeah, it’s been sick. We’re very stoked to know that we wrote a good album.

How does it stand out in comparison to your debut?
Matt: Hmm, completely different.

Ben: Musically I think that we just took way more time with the songs, and we were all in a good space creatively. It was Neck Deep, but just better. That’s what we said from the start, it’s not gonna be anything, like-

Matt: We’re not reinventing the wheel or anything like that, but it was just refined.

Ben: Everyone kinda agreed with us, so yeah. We just stepped it up to be honest.

Matt: Also live-wise, everyone just seemed to pick up on the new songs much quicker than the ones on Wishful Thinking. People were already singing along during the first show.

Ben: We’ve also gotten way better live, which is good. We’ve been on the road for more than four months now and I think that’s the longest we’ve ever been out on one stretch.

Ben: It’s been heavy. And then we’ve got festival season coming up.

Is there anything you learnt from during the first record’s whole campaign which you used in your advantage for Life’s Not Out to Get You? Did you change the way you worked on the music?
Matt: With Wishful Thinking it was the first time that anybody had ever sat down and gone, “right, we’re gonna have to do an album now”. We were kinda like, “fuck, how do make one of them?” Nobody had an idea because we’d only ever really done EPs before. Once we got into it, it wasn’t really too bad to be honest.

Ben: We definitely had a different approach. We obviously worked with outside producers on this one and went and worked outside of my brother’s room. We still wrote with him, and eventually we took it into a studio with Jeremy McKinnon of A Day to Remember, as well as Andrew Wade and Tom Denny. They showed us how they write music, and it sort of had an effect on us in a way. We were learning from them, and they were helping us out. Watching Tom Denny write is great, and some of the ideas which Jeremy contributes are awesome as well. Wade’s a wizard, and he’s super easy to work with. He had some parts on the album too, some little bits here and there. It was just, like, ideas on structure and changing up chord progressions a little bit. I think it was just way better, because they always said that we were never gonna make it, and that we’re never gonna do anything which isn’t Neck Deep. But the record still sounds like Neck Deep! It’s cool, but we’ll do it differently next time we go to write again. We’ll probably do it in a slightly different process and try to develop it a little bit. We’re just gonna see what comes of it, because we’re all feeling pretty good since the last album came out and we’re pretty excited to get writing again.

Are there any, or many, tracks which didn’t make it onto the last record?
Matt: There’s little bits.

Planning on doing anything with them?
Matt: I’d like to. There’s one little bit I want to work on.

Ben: Yeah me too.

Matt: I think we’re talking about the same one, yeah. I’d like that to be on the next album.

Ben: Yeah, we’ll definitely do something with it.

Of course you worked with Jeremy McKinnon on the album. Is there anyone else on your producers wishlist?
Matt: Hmm, I don’t know yet. We’re thinking about but we’re not really sure to be honest.

Mark Hoppus recently remixed a few of your tracks as well. Has he ever spoken to you about collaborating?
Ben: Yeah, that would obviously be the dream scenario for pretty much all of us. Even just to have him involved in any way would be tight. I’d be very, very stoked.

You’re accompanying each show on the tour with some sort of VIP package. What is your stance on the debate about paying to meet a band?
Ben: I was kind of against it at first, and I went sick about this in Kerrang! Touring is very fucking expensive and it’s tough to make ends meet. We’ve had a quick rise to fame too.

Matt: It’s not like it used to be, where you become a band, sell a load of records and make a load of money. It doesn’t work like that anymore.

Ben: And the thing is – we have a lot of crew, buses and all that shit. That’s stuff which people don’t usually take into consideration.

Matt: It’s your own choice but at the same time it’s kinda like; you want all this extra crew to make the show bigger and better for the fans.

Ben: And we’re not ripping them off. Truly! In our thing, it’s a literal acoustic set, free t-shirt, merch discount, a Q&A session and we fucking hang out and take pictures and talk to them individually.

Matt: Also, if you wanna come for the acoustic thing and leave then they can. You’re not obligated to stay for the whole time.

Ben: We have fans who thank us for doing us because they think it’s cool. If someone really, really, really wants to meet you and see you and just loves your band then they’ll do this if they have the opportunity. It’s like, “sick! I get to just meet my fucking favourite band AND get all this extra shit!” Because we truly did have fucking problems with it at first, so that’s why we’ve gone and done as much as we can to make this work. We don’t want people to feel ripped off.

Matt: We don’t want it to just be people walking up to a table, getting something signed and leaving. That is the worst.

Ben: There’s people that charge 80 dollars for a picture at Warped Tour, that’s just fucking ridiculous. We’re doing way more than that, and you don’t even have to get a picture if you don’t want to. It helps us get by on the road and it gives the fans something that they want.

So what do you think of the current crop of bands out there today? Last year you mentioned WSTR, who you’re now touring with.
Matt: Creeper.

Ben: Obviously Creeper, yeah. I think both those bands are the next bigger UK bands in the making, and they’ll definitely break out from the underground. WSTR have been working on their new album with my brother and it sounds really sick. I’ve been digging it and singing a lot of it already, haha. It is really, really good. And Creeper as well, they’ve just got it. They’re ready to go now.

Matt: We’ll be supporting them in a year or two probably, haha.

Ben: It’s sick having both of these newer bands with us.

Matt: Haha, we’re terrible for it.

So what can we expect from Neck Deep for the rest of 2016?
Ben: Festivals and shit. That’s all over the summer and it’s going to be sick. We’re doing a bunch in the UK, and we’re definitely doing some Europe festivals.

Ben: I haven’t looked, though. I need at least a week off before I even look at where the next shows are.

Matt: It’s a pretty chill summer in comparison to the last two, when we did Warped Tour and stuff.

Matt: Every band that’s a friend of ours is on it this year, and that sucks.

Cheers for your time, guys!
Ben: No worries man!