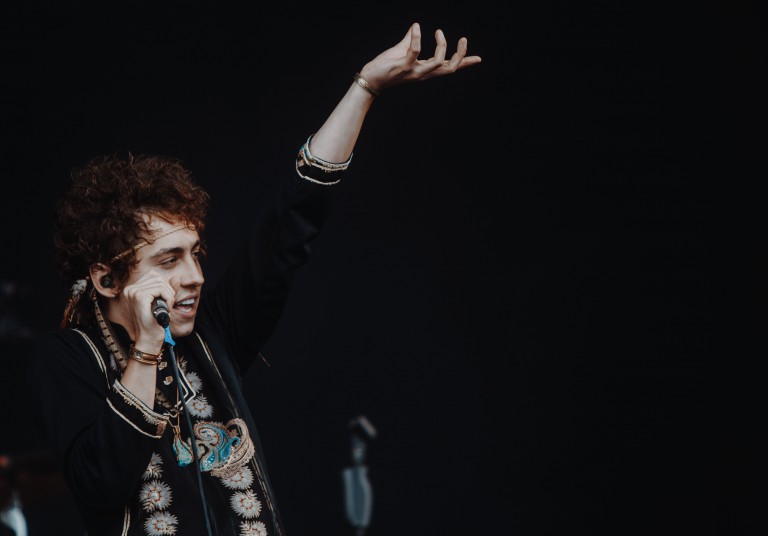 Welcome back to All Things Loud’s New Music Friday column. This week we’re taking a look at three albums which straight-up rock the fuck out, leaving out all the bullshit and doing exactly what it says on the tin.

Hellions are by far and large one of the most exciting bands to come out of Australia in the last few years, and it’s not hard to see why. Although you could label them quite simply as a post-hardcore band with some operatic quirks, it would actually do them quite a disservice given the multi-faceted quality of brand new album Rue. Over the course of twelve songs and a short half hour, Dre Faivre and co. manage to take you on a whirlwind journey which is over far too soon. From the opening bombast of Odyssey and X (Mwah)‘s boyband metal to circus-like The Lotus and Queen-referencing closer 26 (“Beelzebub has the devil put aside for me”), Rue is an album which bridges the gap between Hellions’ gritty post-hardcore elements and a fresher, poppier sound. It’s an impressive feat for a band who seem incredibly tough to pin down within the confines of one particular style. This, though, is also what makes the band so special. You never know what you’re going to get with Hellions, and still it wouldn’t even come as a surprise if they threw an absolute curveball of a song at you. Rue’s lyrics are raw and heartfelt, often cloaked in metaphor as Faivre howls his way through each track alongside his band’s crisp backing vocals. Smile stands out from a lyrical perspective, as does the catchy Harsh Light. In fact, it’s hard to pick out one song which has more impact than the other, such is the quality of Rue’s songwriting. If these twelve songs are an indicator of the path Hellions will stick to on future releases, then rest assured that the future of rock is in safe hands. 9/10

Now, it’s safe to say that Greta van Fleet are often met with a lot of (unnecessary) criticism from classic rock elitists. The Michigan quartet have been made the subject of countless comparisons to rock greats Led Zeppelin due to their easily digestible and near-carbon copy tunes. The band genuinely do sound an awful lot like Led Zep, but this isn’t a bad thing in the slightest. On the contrary, it’s just another example of rock music reinvigorating itself and moving forward using the very sonic elements which made it so great during its 70s heyday. On new album Anthem of the Peaceful Army, Greta van Fleet use this simple rock formula to their advantage as they present listeners with an album which straight-up rocks, all criticisms and negative preconceptions aside. Opener Age of Man is a slow-burning anthem which sets the tone nicely for the following 49 minutes, showcasing Josh Kiszka’s sublime vocal range over a mix of subtle percussion and gritty guitars. The Cold Wind and When the Curtain Falls serve as the record’s first two hit-worthy tracks, flittering in and out of paralytic hard rock consciousness faster than Morrissey cancels a tour. The album’s two highlights come roughly halfway on campfire anthem The New Day (a nice slice of classic rock) and Mountain of the Sun‘s cruising-down-the-highway rock gentile. They both make for great examples of Greta van Fleet’s ability to stand the test of time by putting out an album which probably would have stood its own test of time had it come out back in the 70s. Some may call this a bad thing and lambast the band for their sound, but it’s far from that; this is just the beginning. 8/10

Disturbed are the kind of band who really don’t need an introduction, so much so that the start of new album Evolution quite literally hits the ground running. Chin piercing-less frontman David Draiman commands instantaneous attention from the listener with a rally cry as Are You Ready? kicks off proceedings.  The last few years have been kind to the American nu-metallers, their cover of Simon & Garfunkel’s The Sound of Silence introducing them to new audiences who probably wouldn’t have given them a second chance on any other day. Evolution is an album which sees Draiman and co. capitalise on that success not by succumbing to the success of a sole cover, but by sticking to a formula which has worked for them time and time again: cavernous vocals, pulsating rhythms and frantic guitars. This formula is a well-worn staple across the entire album, with No More, The Best Ones Lie and the grandiose Saviour of Nothing specifically standing out. There isn’t much which sets Evolution apart from Disturbed’s prior output (aside from power ballad A Reason to Fight and Hold On to Memories), but that’s not too big of a deal when you look at the bigger picture, particularly Disturbed’s impact on the world of modern metal. Who’d have thought that the band who brought you Down With the Sickness would still successfully push for relevance in 2018, right? 8/10