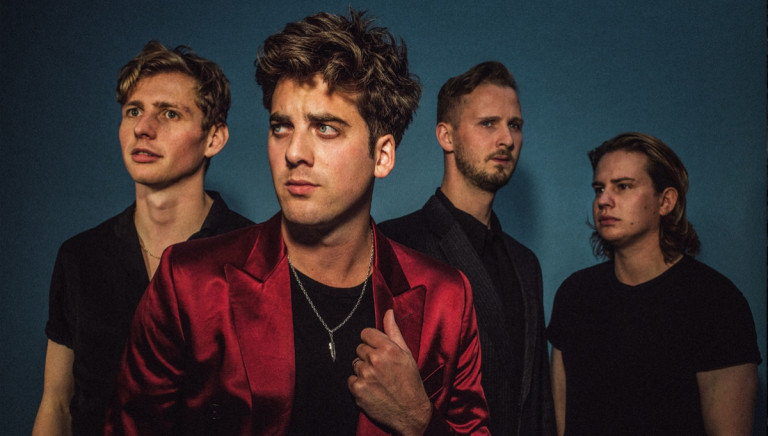 Circa Waves are on the cusp of greatness. At least, that’s what you would be lead to believe following a spin of new album What’s It Like Over There? Jack Parker caught up with frontman Kieran Shudall to discuss new music, Liverpool and the lasting industry impact of Brexit.

Hey Kieran. How are you?
Good, good.

Here we are: another promotional campaign. How does that feel?
It’s funny. It’s a sleepy dream world because we came from our own pub launch and haven’t slept that much.

Tell me more about the pub launch.
We though it’d be cool to celebrate the album by opening our own pub, so we created one and invited fans and mates. We played a gig and got real pissed.

It’s been little over two years since your last record – Different Creatures – came out. Outline me what went down for you guys in the time since. What’s new?
I think that our ambition has grown with every record. The way we see ourselves being a band in the future as festival headliners has also become a thing. We want to get better and that the songs sound bigger, so we’ve concentrated on writing music that really matches our ambition. We toured and travelled a lot more, too.

You mention festival headliners. How is that panning out?
It’s a stepping stone. This is a record we’re really proud of, and we pushed ourselves to write even bigger and better.

What’s It Like Over There? is the new album. Tell me more about how it came to fruition.
I demo a lot at home in Liverpool, so that’s where the embryonic stage started. Once I had a sound I sent it to the band and saw what they thought. If everyone likes it then we take it to the studio and that’s when we made it sound like a Circa Waves song. A lot of it is quite planned very carefully in my studio. I write the songs, but Circa Waves is the four of us so I want it to feel like it’s our band.

The album almost sounds more polished and slicker than before, and it’s definitely a logical next step from Different Creatures. Was it a conscious decision to head down this path?
It does seem to be the natural way for many bands, and I think we just love the studio and experimenting. I’ve always had an obsession with drum and hip hop samples. The drums lead the way early for us. It’d be strange to keep making scrappy sounding rock records, because that’s not the kind of band we really are anymore. It’d be weird if we were pretending.

What’s the scene like in Liverpool right now? Is there anything which is getting you excited about the future of guitar bands?
I’m not home enough to go to loads of gigs, but there are definitely some great ones out right now. Unfortunately the Caverneer got knocked down a couple of years ago, and lots of venues do close. Luckily there are new venues coming through, and I’ve got good people to look up to.

So tell me more about your lyrical approach.
I definitely wrote a lot more stories about other people and their relationships. A lot of it comes from my own experience and visualising other people by means of my own imagination, so that I can create stories. Like Bob Dylan, for example. I’m always trying to push myself out of the box, and I believe that the songs have gotten so much better. I hope that the main difference is that they’ve become much better melodically, with bigger beats.

Nowadays, people often talk about the growing division between ‘traditional’ rock music and the ever-growing rap and hip hop scenes. They also pair this with the ageing “rock is dead” line; what’s your take?
I think those sort of ageing bands who still headline festivals are gonna be there until they get too old. Music is always moving forward, and it’s always been inspired by what’s happening in everyday culture. The way music gets released in hip hop with mixtapes and stuff is so much more prolific, and that inspires us.

So a shift away from albums?
I think so, yeah. Maybe after this record we’ll start doing more of that. It’s a learning curve, and through streaming music moves real fast. The environment has just changed! It takes long to record a song and really get it right, but we try to keep up and write as much as possible. We might do standalone stuff, but we’ll always come back to albums.

There’s long been murmurings that Brexit will have a substantial impact on not only the music industry, but also touring. Is this something you’ve thought a lot about in terms of what it would do to an indie rock band like yourselves?
Yeah, we’re definitely fearful of it. It’s pretty easy to tour in Europe right now, and it always has been. It’s very expensive to tour without a fanbase and you really have to invest a lot, so then with visas and import taxes on top of that it really piles up. It just makes it harder and harder for bands. I think it’d be a real shame if bands couldn’t go to Europe because it’s too much of a money pit. We really want to stay in the EU, so closing our border and essentially closing ourselves away is a really foolish and regressive tactic. We hope that it’ll all get thrown out of the window and that we can stay in the EU, but it’s taking its good old time. What’s it Like Over There? is out now.