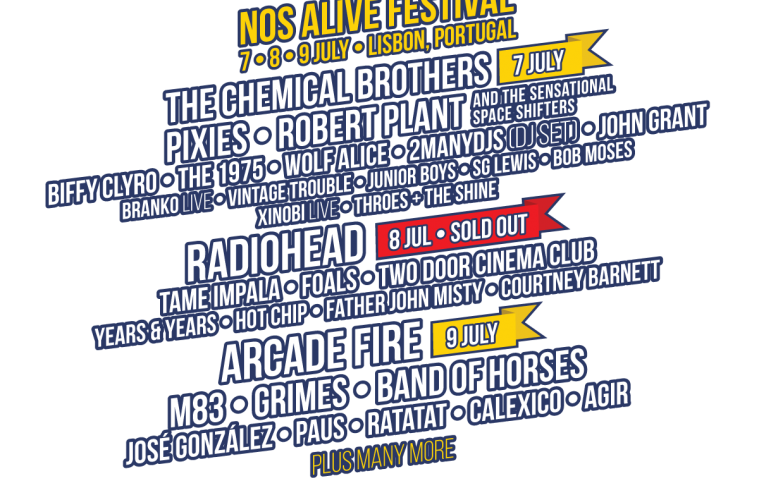 Later this summer, Portugal’s NOS Alive will present Europe with one of this year’s most majestic line-ups. We’ve taken a look at the announcements so far and lined up the best things worth seeing in Algés this year.

RADIOHEAD
It looks as though Radiohead could be dropping their new studio album upon us any day now, with the hype surrounding Thom Yorke and co.’s latest release at an absolutely sky high level. December’s rejected Bond theme, Spectre, whet fans’ appetites with a swirling orchestral opus, yet we haven’t heard anything from the Oxfordshire outfit since this save for a few show announcements. By the time Radiohead headline NOS Alive in July the new record will have already been a well-digested creation, yet in the meantime all we can do is wait in heated anticipation at what looks set to be one of 2016’s best records.

ARCADE FIRE
Indie rock stalwarts Arcade Fire will only be playing two live shows all year, with the band currently at work on their fifth studio album. 2013’s Reflektor was a disco-laden masterpiece, setting the bar for any new music very high. Alongside their show at BBK in Bilbao, Win Butler and co. will headline NOS Alive’s final day in what looks to be a show full of possibilities and potential surprises. Will they play new music? Who knows, but you definitely won’t need to rely on any exclusive premieres to make an Arcade Fire show exciting. Just show up, put your dancing shoes on and sing along to some of the biggest indie rock anthems ever written. It’s that easy. BIFFY CLYRO
Scottish rockers Biffy Clyro will be releasing new album Ellipses one day after their show at NOS Alive, having just premiered the punchy lead single Wolves of Winter. The track, which frontman Simon Neil dubbed a “punch in the throat”, sees Biffy incorporate Vocoders and drum machines to their eclectically growing sonic palette. We had stadium anthems on 2009’s Only Revolutions, before Neil and co. hit the world with massive double album Opposites in 2013. We’re not sure exactly what to expect from Ellipses, however we can rest assured knowing that it’s probably going to open the door for a worldwide breakthrough. Mon the Biff!

FATHER JOHN MISTY
It wouldn’t be a festival without some twinkling acoustic sarcasm, which is exactly what Father John Misty will provide Portugal with come July. The singer-songwriter, who released the beautiful I Love You, Honeybear last year, effortlessly manages to entertain his fans both on and offstage due to his deadpan wit and cleverly written songs. Having recently been spotted live tweeting a Tinder date and filming shows on his own fans’ phones, Misty (real name Josh Tillman) is a born-and-bred entertainer whose set at NOS Alive will be nothing short of fun. TAME IMPALA
If there’s one band who have totally owned the indie spectrum these last twelve months, then it’s Tame Impala. The Aussie psych-poppers released the stunning Currents last summer, and have since ridden a huge wave of success on the back of singles such as the disco-tinged Let it Happen, funky banger The Less I Know the Better and ‘Cause I’m a Man’s groovy RnB. Kevin Parker and his live band are true visionaries both on and offstage, having perfected their live craft to the point that a Tame Impala show is more than just a ‘gig’ – it’s an experience. From live visual projections to confetti, Parker and co. having created a live show which you just can’t miss.