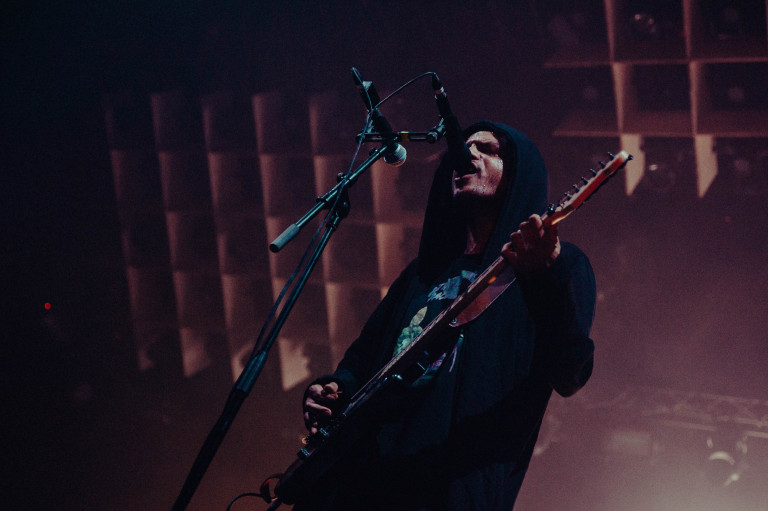 The Occult of Zeal & Ardor

With their latest, second full-length album Stranger Fruit coming out earlier this year, Zeal & Ardor, initially Manuel Gagneux’s one-man project, have toured both Europe, the UK and the States prolifically. Sébastien Gamez sat down with Gagneux to discuss the current tour, his writing process and the future.

Hey there Manuel, how are you doing?
I’m doing great, it’s been a busy tour but it’s been great.

Initially you started this project on your own, but how has the writing process changed now that you are a full-fledged band?
I still write all the material for Zeal & Ardor, as I’m bit of a control freak when it comes to that.

Would you ever want to play around with the ideas other band members have to offer?
I mean, when they play it’s always different, they’re really efficient at their instruments, but what I do now is writing [music] while keeping in mind how they play so that it is more their style. Fundamentally however, nothing has changed and the main musical, stylistic and sonic ideas are written by myself.

What was your relationship to black metal prior to starting this project?
I was really into black metal when I was around 15. I started listening to punk initially, but then went to listen to harsher music later on. A friend of mine introduced me to Darkthrone; for teenagers that is the evilest shit out there, so of course I was really drawn to it.

Your second album, Stranger Fruit came out in June this year and it’s had a great response from fans and critics alike. Do you still see the band exploring similar musical ideas within these two “genres” on future releases, or would you like to move into new territory?
That’s actually something we’re trying to find out now. I see that there’s still something to be explored and discovered in that corner, but I do realise that it has its limits. In order not to bore ourselves and the audience, we have to reinvent something; we just don’t know what exactly yet.

Do you have a song that personally stands out to you on Stranger Fruit?
I really like Stranger Fruit. It’s not a particularly pleasant song, not even to play. It’s just kind of repetitive and grinding, but it serves that border to where it’s like [just right] – we had to experiment a lot to figure out how far can we go without people pressing “next” on the track. I think it’s in that sweet spot where it’s just disgusting enough to be interesting and pleasant enough to be tolerated.

You’ve appeared at large festivals in the US and Canada this summer, and also played lots of European dates. How has the tour been so far and how has the response from the crowd been to hearing the new music live?
It’s been fantastic man! Those big festivals were especially challenging because you don’t have a crowd that only comes for what you have to offer as band; rather, you have to try and convince them to stay and discover your music.

I noticed that myself at your Lowlands show this year. Especially seeing as Kendrick Lamar was playing at the same time and loads of people at your show weren’t really familiar with the music. How did you experience that?
When we first arrived [at Lowlands] we saw Patti Smith, which was interesting. We were kind of afraid, because, yeah, Kendrick Lamar was playing at roughly the same time, but it turned out really well – a lucky fluke I guess.

Are there any particular artists you’d love to tour with in the future?
SOPHIE would be an interesting one. So many actually, Ghost and Gojira immediately spring to mind.  Just to have a different experience, see what they can offer us on tour.

You initially started a chamber-pop project called Birdmask. Are you planning on continuing with this, or even start new musical projects in a complete other direction?
Yeah! I’ve been experimenting with a lot of different stuff right now, but it mostly sounds horrible. It’s fun to do though. Mostly it comes down to finding an idea that I can follow through with.

So you’d say that the focus is primarily on Zeal & Ardor then?
Not quite, it’s just that many of the ideas for other projects are only “half good”. I have to find one that is actually good.

So do you, as Zeal & Ardor, have a particular goal you’re willing to achieve, other than creating and exploring themes such as a satanism, slavery within the respective stylistic boundaries you currently are writing in, musically?
To be fair, not really. Everything came as a surprise, even with the 6-piece band we are now, it’s kind of fallen into place, so it would be a total lie to say we planned everything and that now we have goals. We’re basically just seeing how far this can go. It’s super simple, we just try to enjoy ourselves and what we do. Catch Zeal & Ardor across Europe this month, with tickets available here.