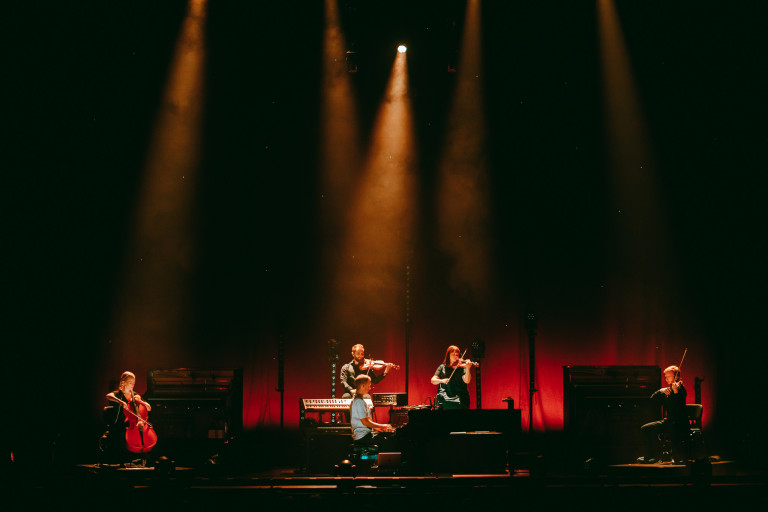 A musician’s hands are often their most valuable assets. They are the means by which they can express themselves by using them to manipulate other instruments. When Ólafur Arnalds was hit by a truck three years ago, the doctors told him there was no guarantee that he’d regain full motor function. His hands aren’t just his means of expression, but his way of making a living. Many in his situation would be crushed by these circumstances, not knowing what else to do having invested so much of their time and life into their craft. Not Arnalds though. Rather than seeing the negative in the situation, he began exploring alternatives. He dedicated more time to his techno project Kiasmos. He began to question the fundamentals of how we engage with instruments. With the assistance of composer and audio developer, Halldor Eldjarn, he devised software which would allow him to manipulate self-playing pianos from an external set of keys. Self-playing pianos are hardly a new invention, but the way in which this allowed him to create multiple notes from a single key press created a modern, inhuman way to interact with a traditional instrument. To hear him tell the story to a sold-out crowd in Nijmegen felt like a moment of victory, amplified by the fact that he regained full motor function after all.

There’s a beauty in the story of it all. The fact that this limitation forced him to find new ways to do what he does best almost feels like a fable in its perfectly sculpted narrative. Arnalds is a rarity in that he holds a star-like status in a genre that traditionally puts focus away from the composer. Much like occasional-collaborator Nils Frahm, Arnalds has created a personality with what he does and flirts between accessibility and ambience to simultaneously appease and challenge his crowds. He knows the importance of the story that surrounds everything he does, and he has created a signature sound while finding new ways in which to challenge and explore its boundaries. As a result, Arnalds has decided to make the most of the impractical twin pianos, with the tour focusing predominantly on his album re:member, released earlier this year, on which they featured. 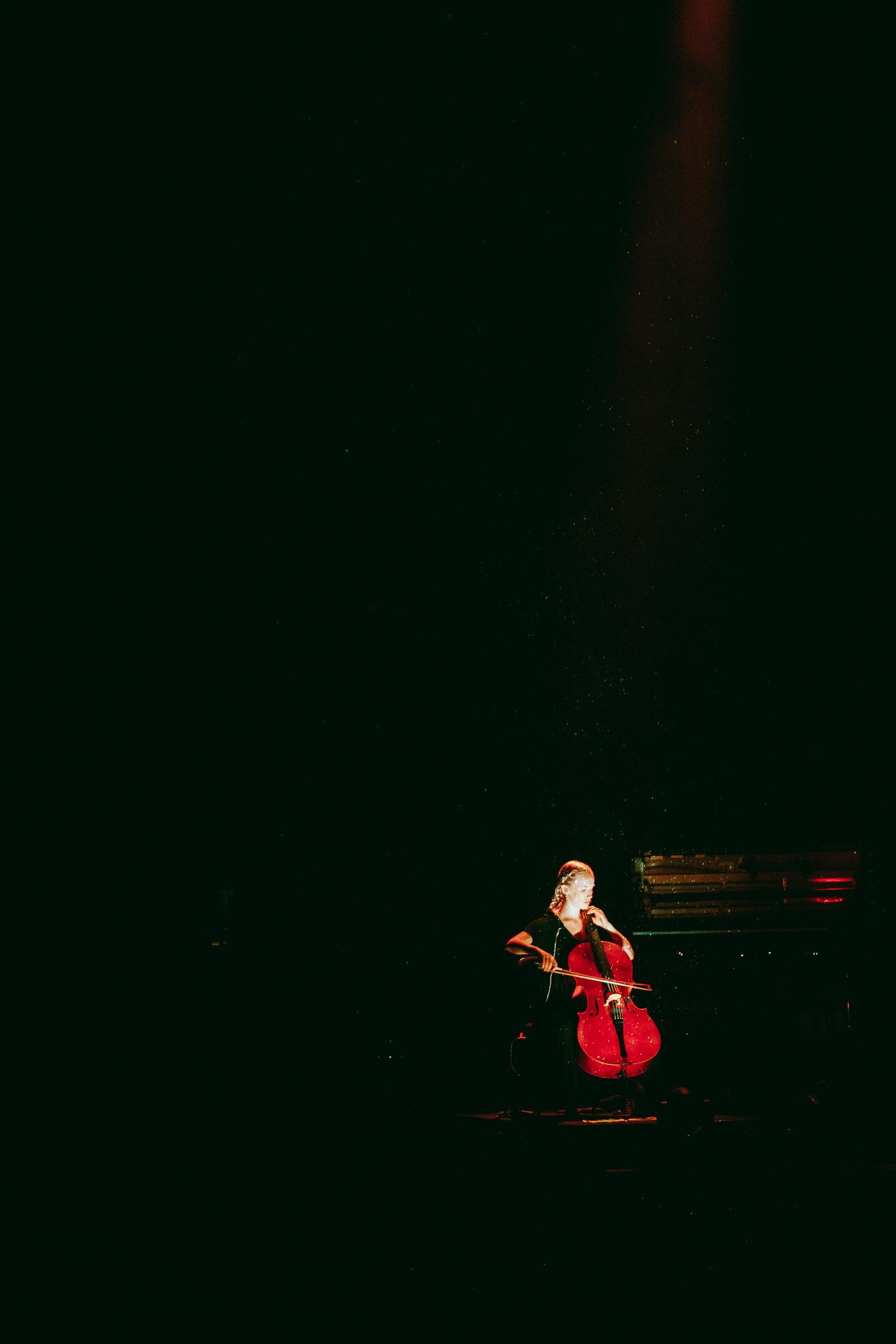 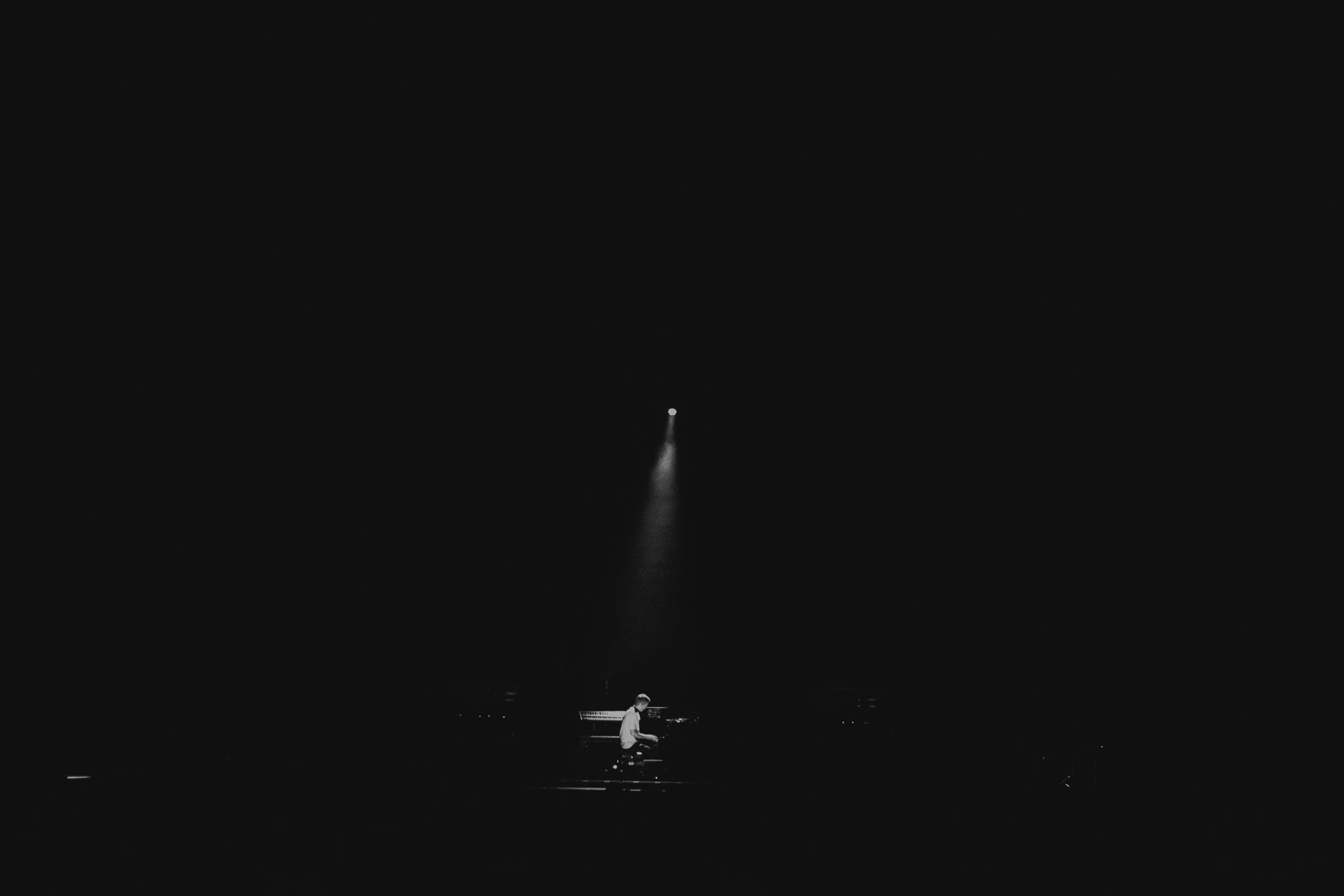 Arnaulds appreciates the power of space and how what’s not played is often as important as what is. In lieu of a support act, it was the job of the lighting to set the mood and atmosphere for the music which followed. It’s clear while the music is the centrepiece of what this performance is all about, the ambience is what allows the audience to appreciate it in the way in which it was intended. Concertgebouw De Vereeniging itself is an elegant yet understated building, with gentle, minimal flourishes within its architecture that d0n’t detract attention from the artist at the centre of it all. In recent years Arnalds has gained significant notoriety with his soundtrack work, scoring soundtracks for TV and film alike. A medium in which the music is an accompaniment to what happens on screen, something which accentuates through subtlety, changing the atmosphere but in a way that you’re barely conscious of. He’s clearly aware of the importance of this, and in many ways, there couldn’t be a more perfect venue for him. The music is the epicentre, the focus, the everything.

He’s joined on this tour by a string quartet and drummer, each of which is as integral to the sounds as he is. Their elements are integral to the tracks in which they feature rather than being detached afterthoughts. Though understated, the chemistry between the players is clear. Each drag of the bow is accentuated, the physicality of the instrument giving each note a quality of imperfect realness. Much like how Arnalds’ piano playing often captures the acoustics of the physical effect on the instrument in his recordings, the same thing is conveyed to a lesser extent with string instruments too. It’s a reminder of the human aspect that gives Arnalds such appeal to so many. It’s vulnerable, it’s human. 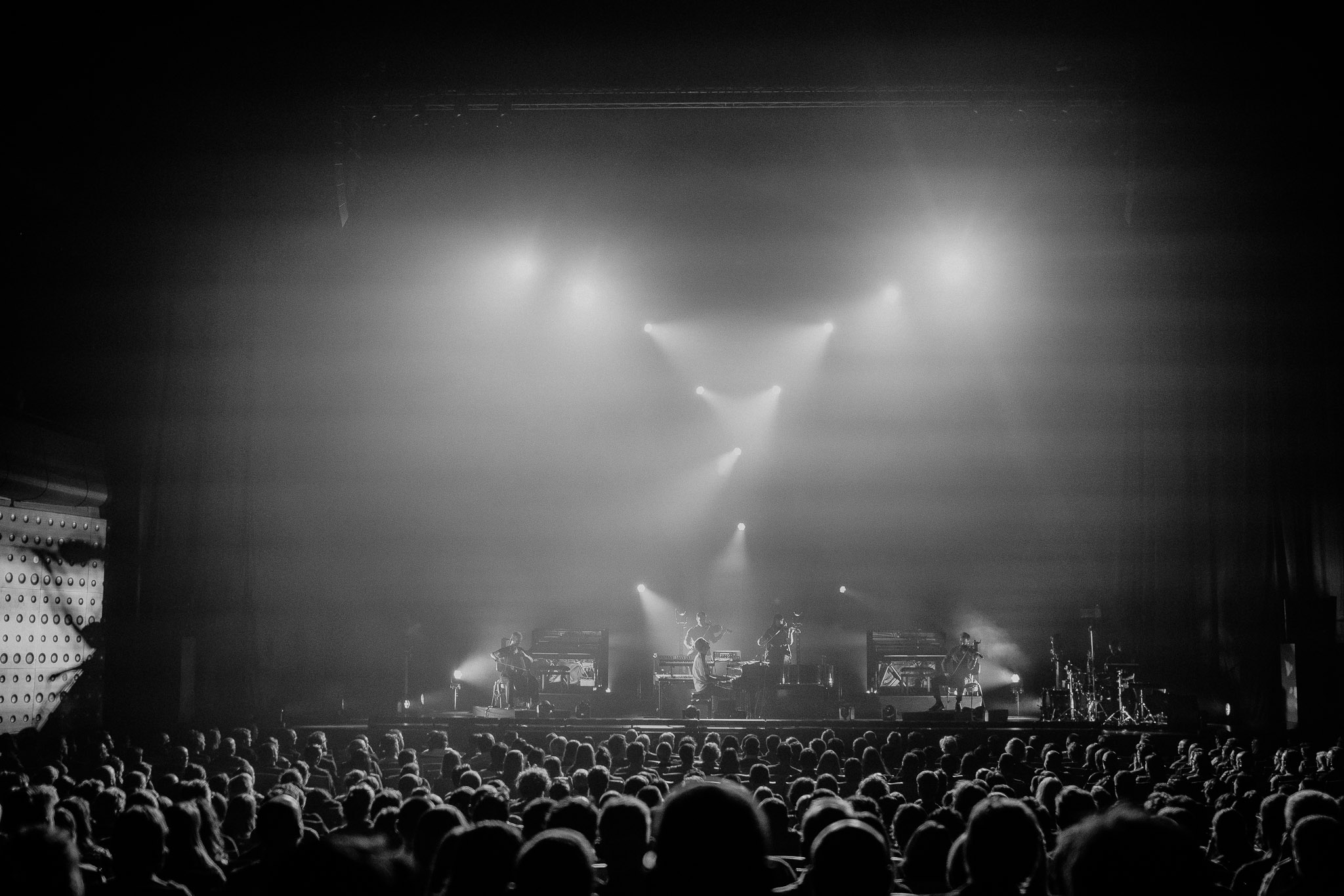 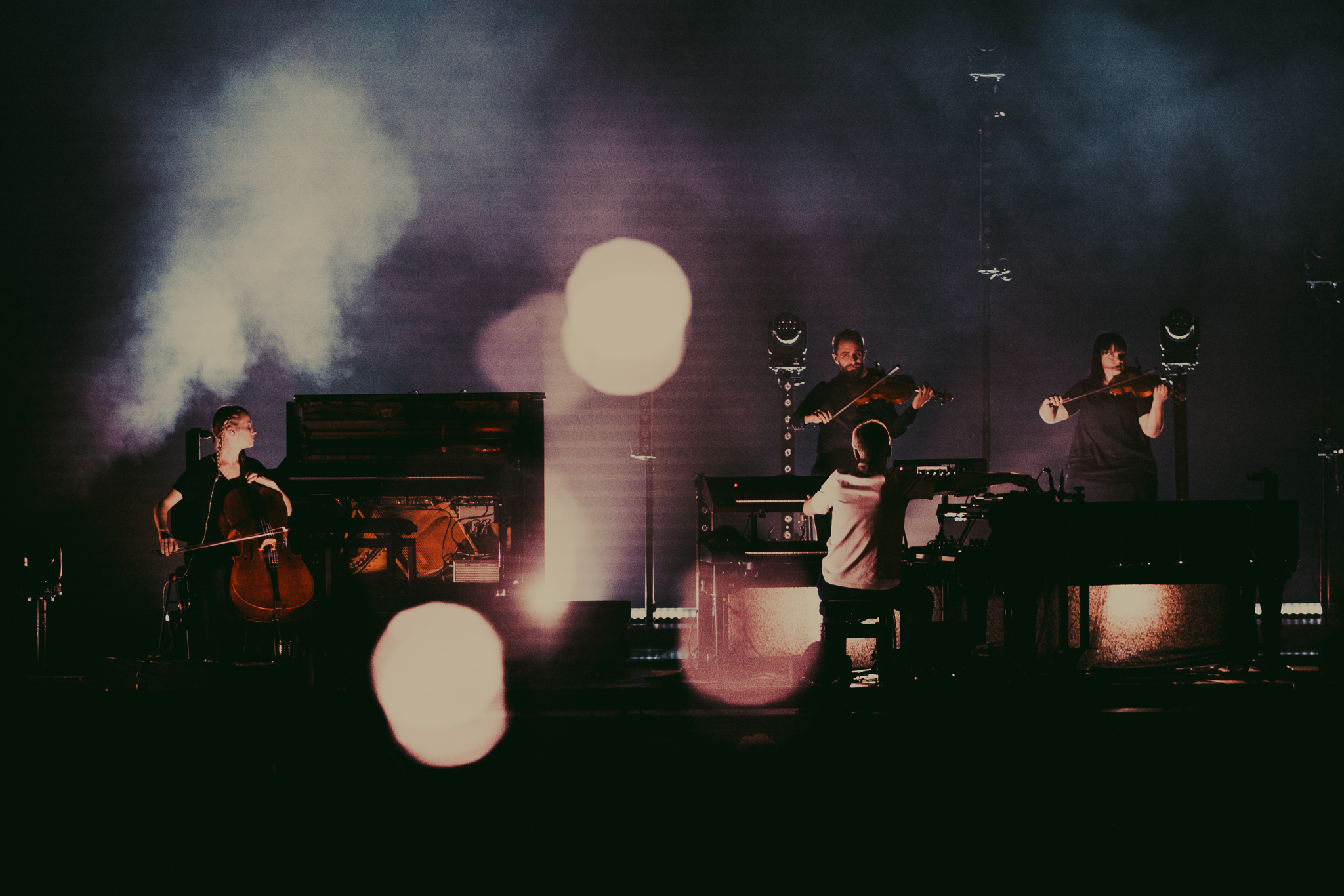 Between songs, Arnalds also reveals himself as a humble yet compelling storyteller, giving context to songs, or making requests of the audience. Before one song, he asks the audience to hum a particular note which will become part of the song which follows it. After the crowd do as he requests, he seems genuinely touched at the enthusiasm with which they did so, saying it was the best response he’s ever had for that request. Then, barely a beat later, clarifies that he doesn’t just make that statement every show. He’s self-aware, and his down-to-earth nature almost feels at odds with the celestial music he creates on the stage. Whether it was his description of the Balinese day of silence which inspired its namesake Nyepi or the backstory of the first song he’d ever uploaded to MySpace which launched his career, he has a way with words that has the audience hanging onto every last one.

The encore closed out with Lag Fyrir Ömmu, dedicated to Arnalds’ grandmother whose passing inspired the song in the first place. Before the start, he described how she would sit him down to listen to two hours of Chopin on the false premise of needing him to fix her radio as he sat there begrudgingly in a Slayer t-shirt. It’s amazing to think how many paths someone as talented as Arnalds could have gone down in life, the significance of this song describing not just the loss of a family member, but the coincidences that result in the people we are. Arnalds let the last note linger for some time before turning back to the crowd to begin their applause, giving a moment for the whole scenario to sit there. Another subtle touch that just gave the audience a moment to reflect on what they’d heard, and yet more proof that Arnalds is the master of subtlety.

The images in this article are taken from Ólafur Arnalds’ performance in Antwerp two nights prior, as shot by Arne Cardinals.