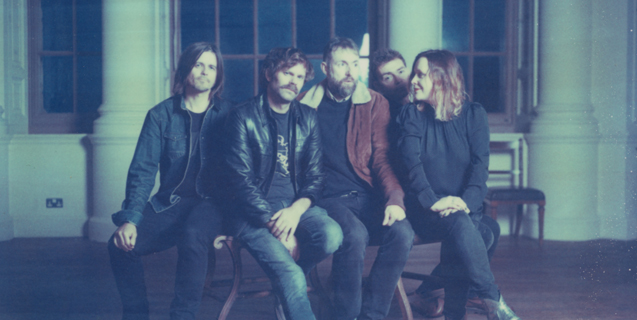 On the Phone With: SLOWDIVE’s Neil Halstead

Slowdive’s grand return has been a long time coming. 22 years, in fact. The Rachel Goswell-fronted shoegaze outfit will release the self-titled follow-up to 1995s Pygmalion next week Friday (5 May) following nearly three years since their massive comeback show at Barcelona’s Primavera Sound. We called up guitarist and co-vocalist Neil Halstead to discuss the band’s return, what they got up and what happens next.

Hey there, Neil. How are you?
I’m good, thanks! Just woke up.

Did you sleep well?
Not too bad, thank you! Unfortunately we had to climb out of bed early today.

Tell me, what was the main motivator behind your initial reunion in 2014?
I guess we just really wanted to make a record. We’d reached a point where we all thought it would be cool to do something together again. Coincidentally we’d also received an offer to play at Primavera Sound whilst we were already having these discussions. I suppose that this was the sign for us that it might be a good time to get back together. That was in 2013, and after that we ended up doing almost a year of shows across 2014. It was the perfect way to build up some momentum before heading back into the studio.

You first played a host of live shows, but then it took a while for the new tracks to materialize. Was it the intention from the off to put out a record in the long term?
We finished the album in November 2016, although we actually started recording it at the start of 2015. We started working on the album after some six months of touring, having played our first show in May 2014. I guess we needed to familiarize ourselves with being Slowdive again. It didn’t feel like we should go straight into the studio after a lengthy standstill. We needed that band energy, and the live shows really helped in generating that. We started the record, and then we’d go and do a couple of days here and there. We had to fit it around all of our other commitments too, as it was definitely going to take a while.

So what were some of the major inspirations for the new record’s general sound?
Basically, we would come together in the studio with a few ideas and then work around them in order to see which direction they would take. It took a long time for things to initially develop, so it’s hard to say what inspirations there were if anything at all. We wanted to make something different to what we would’ve done in the 1990s, so I think that this new record falls somewhere between Souvlaki and Pygmalion.

Have you made many major changes to your gear set-up compared to 22 years ago? I.e. pedals, synthesizers and so on.
We use totally different stuff when we’re performing live as opposed to in the studio. We’ve all been doing different stuff in the last 22 years. I’ve been making folk records, and Simon (Scott, drums) has made a lot of ambient music. I think that we all brought our own different experiences into this new record. The first few Slowdive albums were recorded completely on tape, and that also includes the samples and loops on Pygmalion. Technology is very different nowadays, so it allows us to do so many different things.

And has age changed the way you make or produce music?
I think that, as a band, we approached this record in a similar way to how we made our previous albums. We never talk in advance about the kind of record we’re going to make; instead, we just work on the musical ideas and see where they lead us. There’s a certain point where the direction becomes apparent from little points we pick up on. The technology we use is different, which means that we can take these ideas away with us and come back later to work on them again.

How do you see Slowdive now, moving forward?
Making this record was a lot of fun! I feel it had to be a familiar Slowdive record for us, and in turn it’s opened up some different avenues we want to explore. It would be great if we could make another record, and we’re really keen to do so. Ideally, we’d like to make another album fairly quickly. Right now, though, it’s about enjoying the process and doing something that works well creatively.

What’s your own take on the term “shoegaze”? In the past this term has caused some commotion amongst fans.
I love the fact that the term has been reclaimed! In the early 90s, when it was first coined in reviews for I think the band Moose, it wasn’t exactly a term of endearment. Now, it’s become its own genre and it seems a bit like a badge of honour for young bands. The term has history. I never used to like it, but now I think it’s great.

So, to conclude, which show on your extended reunion tour stood out the most?
The first show we did at Primavera Sound was probably our best one. It was the first big show back after having been gone for so long, and playing it was just great. We were all surprised at how big the crowd was, to be honest!

As you’ve very clearly deserved over the years. Thanks for your time!
No problem!

Slowdive comes out next week Friday (5 May). Order it here.