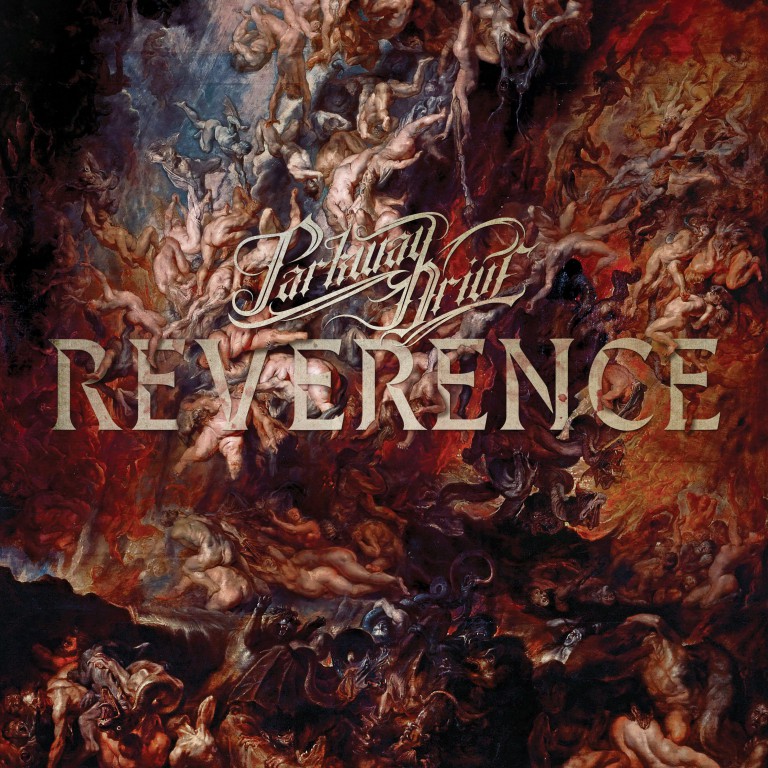 Australian heavy metal titans Parkway Drive are currently sitting on one of the most anticipated rock albums of the year: Reverence. The follow-up to 2015’s Ire serves as another step in the right direction, with Winston McCall and co. once again displaying their ability to sonically evolve whilst still maintaining the core essentials of that gritty Parkway Drive sound. That core sound is one which the quintet have carved out for themselves ever since their early Byron Bay beginnings, slowly but surely morphing from a band who tore up the sweatiest clubs to a band whose live show goes far beyond that and sends them into the upper echelons of pyro-infused arena rock. The live show may have become an important part of Parkway Drive’s repertoire in recent years, but it’s still the music which stands absolutely central. Which begs the question: is Reverence actually any good?

“I spoke a vow today and asked if God would come and play” murmurs McCall on album opener and lead single Wishing Wells, a slow-burning powerhouse which features some of the band’s gnarliest vocals to date. “‘Cause tonight I’m killing gods!” declares McCall right before the track well and truly kicks in, allowing for pummelling riffs and jarring rhythms to enter the frame in classic Parkway Drive fashion. Wishing Wells angrily sets a tone of bitterness and frustration for the rest of Reverence, doing so better than any of the band’s previous album openers ever achieved. If Wishing Wells was an indication that all isn’t well in the world, then allow the stadium-ready bounce of Prey to continue carrying that torch. Winston snarls that he has “an axe to grind“, grunting his way through the borderline hair metal track with utmost ferocity. It’s worth noting that the rest of the band are as tight as ever once again, with drummer Ben Gordon sublimely taking it to the next level from start to finish. Jia O’Connor’s fuzzed out bass kicks Absolute Power right into action, with the bulk of proceedings slowed down as McCall waxes lyrical about authoritarian corruption and the flaws contained within the powers that be. “The truth drops like a bomb” he declares during the chorus, adding that “fear rules like a reaper through the streets of the lost” with plenty of conviction. Absolute Power hits hard, eventually making way for the pulsating synths of Cemetery Bloom. It’s on Cemetery Bloom that Parkway Drive’s multi-faceted skillset really enters the foreground, with the track built around a spoken word monologue and a continuously pulsating synth line. It constantly feels like the track will erupt at any given moment, but this moment of eruption never arrives and is instead replaced by an unbridled sense of bubbling tension.

It’s up to previous single The Void to pick up where Absolute Power’s headbanging riffs left off, presenting itself as one of Reverence’s most powerful tracks alongside the absolutely brutal I Hope You Rot. “There are no halo’s to be found, so save your breath” screams McCall, adding that he’d rather “wait in line” if “heaven’s gates are open“. I Hope You Rot relies heavily on religion for its subject matter, with Winston referencing angels’ burning wings and crooked faith whilst comparing the eyes of the lord with that of a child. Both lyrically and musically, I Hope You Rot serves as one of Reverence’s strongest tracks, dealing with grief and using religion as a topical scapegoat. It hits harder than a solidified battering ram, not giving the slightest fuck in the process and leaving absolutely no prisoners. Shadow Boxing subsequently exposes McCall’s personal insecurities, with the frontman again venturing into the realm of spoken word as he takes an introverted approach to speaking of his own personal struggles. “I’m gonna dance with the devil until there’s no songs left” he declares, before serene strings enter the frame and underpin the band’s instrumental stabs. The majestic In Blood is a by-numbers metalcore song, utilising slight hints of plucked pizzicato during its intro before turning the volume up to (a journalistically clichéd) eleven. “I’ve gone too far to turn back, I’ve seen too much to play dead” decries McCall, with the symphonically constructed penultimate track Chronos serving as the final ‘proper heavy’ moment on the record. It’s also the longest song the band have ever put out, clocking in at six minutes and twenty seconds (all of which are – thankfully – utilised wisely). An elongated intro makes way for Parkway Drive’s classic heavy metal stomp, placing the band back in familiar territory as Jeff Ling and Luke Kilpatrick’s guitars intertwine with a sense of intricacy which only Parkway Drive are capable of.

The second half of Chronos contains some of the best music on the entire album, however this needs to be heard to be believed. Reverence comes to a somewhat subdued close on The Colour of Leaving‘s subtle guitar lines and hyper personalised lyrics. Here, McCall ditches the growls and screams; in fact, he ditches singing altogether. Instead, he talks his way through the track as he tackles the tough topics of loneliness, mental strength and leaving things behind all while dealing with grief. “You never know how small your voice is until you’re screaming out the silence” he declares, with a lone cello underpinning his musings. The sound of footsteps departing on autumn leaves indicate Reverence’s end, marking yet another pivotal chapter in the ongoing story of Parkway Drive. As a standalone collection of songs, Reverence is by far one of the strongest heavy records of the year so far, and one which will go down as a critical success story the world over. As another piece in the Parkway Drive puzzle, Reverence presents itself as the sound of a band who have finally found their place in this often difficult world. It’s powerful from the word go, particularly from a lyrical perspective. It’s McCall’s darkest lyrical work to date, something which he attributed to the “horrible things” which he and his bands have had to experience and deal with in the three years since Ire came out. Taking that into account, you can definitely conclude that Winston has made the most of his experiences, translating them into words which are steeped in religious connotations whilst remaining unabashed and fierce. The lyrics lend themselves incredibly well to an already incendiary instrumental backing, one which is packed with pummelling riffs, destructive rhythms and a looming sense of irreplaceable sonic grandeur. Parkway Drive are the kind of band who need to evolve in order to continue thriving, and Reverence aids in achieving exactly that. Reverence comes out tomorrow (4 May) via Epitaph Records.