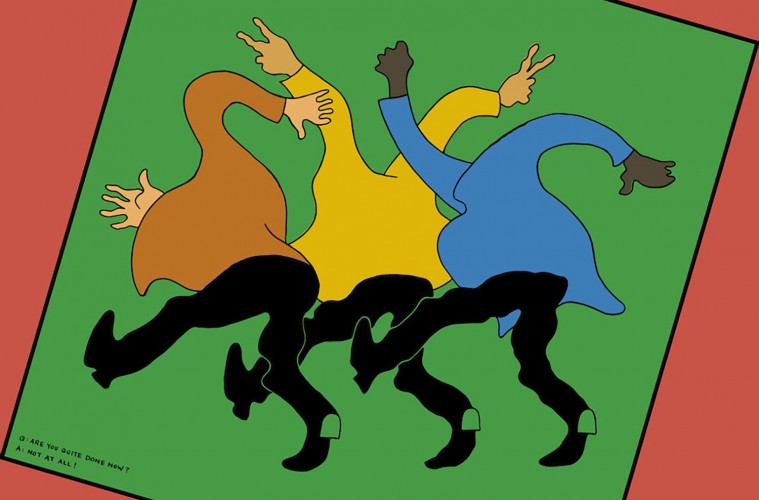 Parquet Courts are Wide Awake and You Should Be Too

To some people, Parquet Courts are one of the most exciting, consistent bands of the last ten years. To some, they’re a bunch of chancers riding on the coat-tails of The Modern Lovers and Pavement. To most they’re “who?”. While this album may not change the opinions of those in the first two categories, there’s every chance it may bring them to the attention of the third.

On Wide Awake, the fifth album featuring the full line-up, they made the surprising decision to get Danger Mouse in for production duties. For a band with a sound like theirs, this didn’t seem like an immediately obvious pairing. Not that I doubt Danger Mouse’s abilities, but this was a band whose loose yet playful take on 90s indie rock was part of the appeal. They revelled in a mildly lo-fi sound with relatively simple instrumentation, it was part of what made them what they were. The concept of the collaboration created mental images of a crisp, bland, perfectly produced set of songs, something that didn’t feel like it would accentuate their best aspects. I was concerned.

Thankfully, Danger Mouse proved yet again that there’s more to him than his current back catalogue gives credit to. It has more in common with Beck’s underrated Modern Guilt than Gnarls Barkley. The end result is undoubtedly Parquet Courts, but the production is a little cleaner than it has been in the past; his influence is subtle yet complementary. On the whole, you wouldn’t even guess it was Danger Mouse behind the desk, though there are a few exceptions. The robotic rhythm of NYC Observation, the Rhodes organ of Death Will Bring Change, but it’s at its most obvious with the title track and lead single Wide Awake!

For the opening 12 seconds you’d swear you were listening to a mid-2000s dance punk track, the agogo bells and disco beat making you question whether it’s even the same band. Then the guitars and the vocals kick in and you’re left with no doubt. It’s one of the highlights of the album, built around a hook so simple and catchy that you’ll find yourself wanting to shout “I’m Wide Awake!” at strangers in the street for hours afterwards. It’s the sort of song that they’ve arguably lacked in their back catalogue. The catchy single that draws in the casual listener, regardless of their taste in music. The closest they got before was Borrowed Time, but the best part of that song was the way it transitioned from Master Of My Craft. It didn’t quite have the sort of wow factor that made people open up Shazam the first moment they heard it. You couldn’t imagine it being played in a segment on the Ellen show, which is an achievement Wide Awake! has already obtained.

Vocally, they sound more ragged and passionate than ever, perhaps a consequence of the political content of the lyrics. Such is the zeitgeist, that this is a politically charged album. Normalization takes a critical stab at America’s gun control policies and the state of the narrative around the debate. “Normalization, processed reality, immunization of what goes on” they sing, sounding exasperated but not resigned. Opening track Total Football is an ode to their love for American hardcore and the need for collectivity versus individualism that the scene enshrined. Perhaps unsurprisingly from its title, Violence has one of the most ferocious vocal lines, though its relatively sedate beat avoids alienating the listener. A Savage lives up to his name as he crashes into the track with the line “Violence is the fruit of an unreached understanding that flowers from the lips of scoundrels”, taking aim at capitalism, banks and the media amongst others. It’s more of a shouted essay than a vocal line, contrasted with a funk break more reminiscent of Devo’s sillier side than the brutal lyrics which precede it.

Those who still get upset with the Pavement comparisons will be outraged if they hear Mardi Gras Beads, the track’s opening having more than just a few similarities to Malkmus & Co.’s Range Life. It almost feels like a fuck-you to those who still label the band this way, more than different enough to be accused of being a rip-off, but with enough of a nod to make a point. You can understand the frustration at this point, as this is a band who’ve proved to be one of the most consistently inventive and creative of the past decade, yet the comparisons still linger and prove too much for the narrow-minded.

It’s hard to choose highlights from an album like this when there are so many. Almost Had To Start A Fight / In and Out Of Patience has a ridiculously satisfying stop / start approach, with the transition from the first half to the other being another reminder of their uncanny ability to sequence certain tracks to become greater than the sum of their parts. Extinction sounds like the sort of song The Strokes wish they could still write today, Freebird II arrives in perfect time for the summer while Tenderness plays the album out with a whimsical charm that sashays its way out of the door. The album’s full of gems, another highlight in their incredible back catalogue.

The risk they’ve taken with recruiting Danger Mouse has paid off. He’s shown a clear understanding of the band’s charms and has found a way to subtly accentuate them. If there’s any justice in the world, then this will be the album that makes them a household name, but whether or not that actually happens only time will tell. Wide Awake! comes out this week Friday (18 May), and is our Album of the Week.