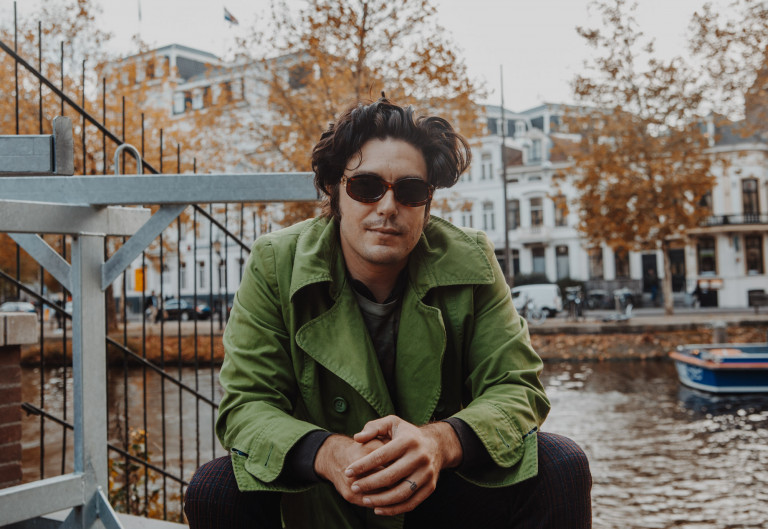 The Past, Present & Future of The Growlers

“I never even to think to blame this all on luck”. The Growlers frontman Brooks Nielsen utters these eleven words on new track Thing For Trouble, taken from surprise new ‘stopgap’ album Casual Acquaintances, a summer record which brought the Californian band back down to earth by means of ten short but sweet, DIY-tinged tracks. These songs double up as leftover recordings from the 2016 sessions surrounding the polished City Club, an album produced by The Strokes’ Julian Casablancas and brought out on his own Cult Records. A lot has gone down in the world of The Growlers since 2016, including a lawsuit, the resurrection of Beach Goth Festival and work on a brand new album slated for 2019. Jack Parker caught up with Nielsen in Amsterdam to get the lowdown as part of our big Five Years of All Things Loud Anniversary Interview.

Hey Brooks. It’s been a while, how are you doing?
Yeah man, I’m good, good.

In the two years since we last spoke you’ve put a new album and regained control of Beach Goth. Just outline for me what life in The Growlers has been like for the last two years.
City Club went on forever, it felt like. We made that record, made some member changes and toured hard. The band is feeling really good right now! Unfortunately we had to stay quiet and fight for our lives with that lawsuit against a dirty promoter. He taught us a lot about the music business and how it works by suing us and taking all our money. We got out of there and through it all we were able to record and pull of a couple of festivals. I’m glad we got out of there, and it’s made us tougher as people. It feels good now, nothing’s in the way.

So the lawsuit essentially took over your lives for the last two years?
Yeah. Now we can talk about it, but we don’t care to. We’re in the business of entertaining people. It did suck, and we learnt that some people are shady. You tend to hear that kind of stuff anyway, that it’s a shady business and stuff. We’re quick to make a friend out of anybody, including some promoters with whom we’ve taken risks together. They take care of you, and you try to hold up your end of the deal by being a cool band. I’m glad it’s over, so that we can get this tour done, go home and make a new record.

Casual Acquaintances came out in the summer, and that was comprised out of City Club demos, correct?
Yes. The process for Matt and I has always been that we’ll talk about doing this or doing that, but it never works out that way. It ends up just being us secluding ourselves and trying to make as many songs as we can. There are so many lying around that go unused, and when we recorded City Club with Julian [Casablancas] he kind of gravitated towards songs which were more in his world. There was a lot left over that The Growlers would like. At first it felt like we were putting out demos, but it was actually us who recorded and produced these songs together with our good friend Kyle Mullarky. That is The Growlers. We decided to keep the songs the way they were and not put any extra stuff on them.

So you didn’t re-record them?
Nope, we just mixed them. We put them in an order and realised we had a record which everyone liked. We worked with an artist who makes great miniature artwork (Aleia Murawski), and et voila: it gave us a reason to go out touring.

You mentioned Julian just now. How is your relationship with him – and Cult Records – now? Do you still keep in touch?
No, not really. It felt like it had kind of dissipated, and a lot of things just united for us which made it feel like we’d gone back to the beginning of the band. Like, without a producer or anything and just us with Kyle, putting stuff out all by ourselves. We’re just going to keep doing that, it feels good to have total control as things work really quickly. If it’s not a hassle and we enjoy it, then why not?

So you’ve left Cult then?
Yeah.

Was that a mutual decision?
I think so. It’s hard, but there wasn’t really much talking about it either. We just told them, “Well, we’re gonna put this out and we’re gonna do it.” We just moved on.

How do you envision that going into the future? Putting stuff out whenever it suits you?
Yeah, I’d like to think so. I’ve been in this for ten years and I still haven’t got any better of an idea as to how this business works. I don’t follow social media, I don’t follow what’s going on in music, I have no idea what certain record labels are doing, or which ones are cool. I never really listened to music like that to begin with. I’m never, like, “Oh this label is cool, I’m gonna buy whatever they have“. I’m really disconnected, and I think I work the best that way. It makes recording cool. If I could decide myself then we’d do everything whenever we fancy; I don’t like the timing of the record industry. You have to work on it for a certain time, they have to create a campaign to promote it, but for me I just like putting out music a lot faster. Hopefully we can get back to that soon by making this all DIY.

I’m assuming you’ve got new music in the pipeline?
We did some attempts, but I really think I have to go back and listen to it all again to see if the results were fruitful. At the time I was kind of negative about it; the songs were great but I wasn’t really feeling it. I need to check that out again, there are 40-odd songs but I still need to make more.

Prolific. You also resurrected Beach Goth this year. What does that term now mean to you after everything which has happened in regards to the lawsuit, media attention and everything else it’s put you through?
To me it was always an inside joke. Nobody ever really liked the name The Growlers, so it was basically another name for us. It was something that people would use to describe us, as we’d play dark music with these surf vibes. We’ve moved around a lot since then, and now it just feels like something which is a part of us. Other people try and make it feel like it’s a genre of its own, but to me it’s just The Growlers. It’s just as much that as it is our band name.

The festival is now back, of course. Is it still the plan to further this as the years go by?
I’m not sure, it’s a lot of work. The bigger it gets, the more politics there is involved; that can be a burnout. But then again, right after it’s finished I’m on a high and I see the kids having a lot of fun. Then I obviously wanna do it again. It’s just up and down, so now it’s ours and we’ll continue it. I just don’t know at what scale. I’d like to bring it all around the world but I don’t want it to become too inflated. It has to feel like the original parties we’d put on, the illegal ones.

Over the last few years we have talked a lot about the DIY scene and your involvement within it. In 2015 you talked fervently about wanting to be active within this scene, and a year later you talked about how you’re fine with laying tasks off to others. New track Thing For Trouble has a particularly poignant line: “I think I’m gonna miss the struggle if it all pans out. I’ve always had a thing for trouble since I learnt how to mess around”. Is that a reaction of sorts to the whole DIY scene right now?
Definitely. I think that we’d done it long enough for me to be able to talk about it like that, and I just have mixed feelings. I loved the days where we did it all ourselves and went for it, but at the same time we’re really messy. We’re very lucky we never went to jail, crash or end up as really bad drug addicts. It’s difficult, because there’s all these bands who have a tough time sticking around long enough to make it through. It’s just a struggle, so to have the luxury of people working for us and the safety of people driving us is good, also money-wise. For years all we did was build up debt and live in really bad poverty.

Of course you’ve also got a family now.
Yeah, so now it’s gonna work out a little bit better. The lawsuit obviously didn’t help, and what hurt a lot is that the guy who sued us also knew a lot about our personal lives. He knew how much he was gonna damage us, the bastard. But that’s nothing for me to worry about anymore. For us I’m just glad that we got out, and that he didn’t hurt us more. It’s a lot of responsibility to run a festival, and it can be dangerous too.

You mentioned earlier that you’re lucky not to have gone to jail or develop any nasty habits. Do you still like a hedonistic bunch when you’re out on the road, or have you totally moved on from that lifestyle?
As much as I’d love to say that we have, no. We’re fucking suckers for any bit of trouble. Luckily there are now more people around to help guide us, but that’s a part of it. It doesn’t feel natural if we don’t do that; that’s how we started as kids – looking for trouble – and that’s how it’ll end. The Growlers will release a new studio album in 2019.