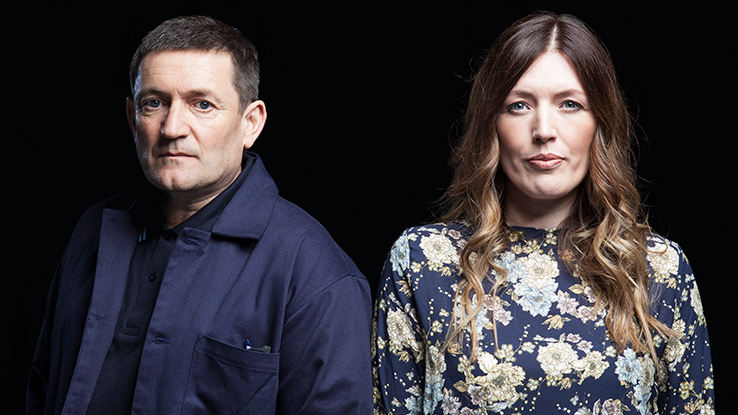 On Sunday night Paul Heaton & Jacqui Abbot brought their glorious collection of pop songs to a packed Paradiso in Amsterdam. First up, though, was Dutch singer-songwriter Yorick van Norden, whose folksy stylings seemed almost vacant on the huge Paradiso stage. Songs like Train in the Station and Another Day in London Town had a sweet centre but felt ineffectual, and his act was characterised by a gooey sentimentality.

Taking to a stage draped in EU, Soviet and Jordanian flags, Heaton and the band first launched into Beautiful South classic Old Red Eyes is Back, its blistering piano line accompanied by solid gold harmonies. This is followed by Housemartins single Me and the Farmer and the opening track to his first album with Jacqui Abbott, Moulding of a Fool, songs released 30 years apart but each one pure pop magic. From then on it’s a guided tour across one of the greatest song collections in pop history. A double header from 2014 album What Have we Become? – I Don’t See Them and D.I.Y – showcases Jacqui’s unique voice, which sounds huge and intimate all at once. Rotterdam (Or Anywhere) inevitably draws big cheers and a few cheeky boos. During reggae-infused The Austerity of Love Paul’s disco Dad dancing launches him from one side of the stage to another, and it’s all wonderfully infectious.

At one-point, Paul refers to the huge EU flag on the stage and begins an impassioned speech against the blasted ‘B’ word, asking the audience to “please know that not all British people are insane.” Perfect 10 brings the main set to a close with a crowd pleasing, sing along flourish. The night’s first encore fires off Happy Hour, which induces some delirious dancing, and You Keep It All In, which incited the audience to belt out the words as though their vocal cords would shrivel up should they stop. A second encore brings with it The Beautiful South’s first single Song For Whoever, which could easily be the best song ever to reach No. 2 in the UK charts. The gig finishes on latest single Last King of Pop, which Paul informs us will be the last time they play it and shows that his ability to craft the perfect pop single remains undiminished. Is Paul Heaton Britain’s (and Europe’s) greatest living songwriter? Perhaps so, but bestowing him such a title would lead you to think he has become fossilised. But on Sunday, he and Jacqui Abbot prove that they are fiercely alive. James Turrell