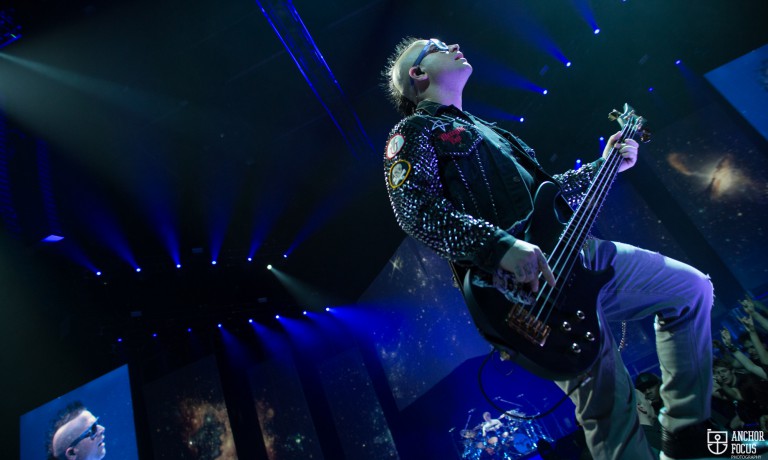 On the Phone With Avenged Sevenfold’s Johnny Christ: “What we’ve got coming is really exciting”

Being one of the biggest bands in the world is never easy, and for a band like Avenged Sevenfold it couldn’t have come at a better point in their long-winding career. Having hammered away at the local US metal scene since as early as 1999, M Shadows and co. have continuously managed to put out a selection of critically acclaimed and sonically forward-thinking records, each one more successful than its predecessor. Their breakthrough came in 2005, when City of Evil lit the fire for a band whose ambitions grew as the years went by, with 2010’s Nightmare eventually elevating them to a level nobody could have ever predicted in their wildest. It was only when 2013’s Hail to the King came out, though, that the world really sat up and noticed what the Huntington Beach quintet were up to. Although well-established by then, it served as the record which put them at the top of festival bills and within the confines of the world’s biggest venues. It also made for a point in their career where any next step could have been a huge hit or a massive miss. Thankfully for all those involved, last year’s The Stage turned out to be a meticulously crafted risk, both musically and promotionally. With the band now well into its promotional campaign, we found the time to call up bassist Johnny Christ (pictured above) to discuss its succes so far, their plans for 2018 and how they can only move forward from here on out. Hey Johnny. How are you doing?
Hey man, I’m doing great. What about you?

Nice one, I’m good thanks. It’s been just over a year since you put out The Stage. How’s the general reaction been from your point of view, particularly in comparison to previous A7X records?
So far it’s been par for the course, it’s been doing great! We did a lot of different, crazy things with it and there was a lot to digest for our fans, but every record that we’ve put out has had the same reaction. That’s because we always do something different.

It was preceded by an unorthodox marketing campaign. Now that time has passed, do you think this ended up being the most effective way of going about it?
I mean, I’m absolutely glad that we did it and that we thought outside of the box, but I think that it’s difficult when you don’t know if the fans going to ‘get’ those ideas. If you do something a particular way for so long it becomes hard to get out of that comfort zone. The music industry changes so drastically months at a time, and I’m really excited about having opened a door to the things we could do in the future. There are so many different ways of doing something, but I’m super proud of the way in which we did this. It’s creatively excited me, looking forward.

If you were to do such a campaign again, would you approach it differently?
Hmm, I’m not sure. You know, I think the execution of keeping it a secret was done extremely well. At some point, we should’ve had some tours ready to go, but you never know exactly how it will go off. Different times and different markets could’ve allowed for something totally different, and then you have to re-evaluate it. We’ve got a lot of shows lined in up in 2018, and the ticket sales are looking great.

The Stage’s arena show was an extremely ambitious one. Do you think you managed to pull it off as you’d wanted?
Looking back, I’m really happy with how that went considering that there are always so many things you want to do. I would’ve some more bits and pieces here and there, but I was so excited about what we were able to put together. We decided to move away from the pyrotechnic stuff which we did more of on previous tours, but I think that we’ll bring that back again one day. We wanted to do something that painted the picture of The Stage in a live setting, which is something we’ve tried doing every time – painting a visual image.

How did the initial collaboration with Cirque du Soleil’s team come about?
I think that was via our own production team. They got in touch with them and then got together, and their team managed to provide is with some great content and video wall stuff; it was very exciting. With such big productions, things are bound to go wrong. Did you have any Spinal Tap moments?
Haha, yeah. We had a couple of moments on the European tour which we did at the beginning of the year. There’s this spaceman we have which gets lifted up behind the stage, and there a couple of occasions where he went a little limp on us. We got a couple of laughs out of that. There wasn’t anything huge, though, but I guess you just look back and learn from it. No show will ever be 100%, but we always try our best and have fun with it.

And were there any particularly memorable moments from throughout the tour this year?
I guess the most memorable part was here in Sacramento, California. We played a show on M Shadows’ actual birthday and we got some cheerleaders to come out onstage and give him a cake. That was pretty memorable.

How do you see the live show moving forward from a production sense? Particular in regards to the larger festival shows you’ll be playing in Europe next year.
That’s gonna be very difficult for us, because those shows will all be outdoors and on a different stage each night. Our production is largely made for indoor shows. We’re currently making the transition into suiting this production to festival stages, and we’re actually working on it as we speak. We’re excited for the European festivals, because what we’ve got coming is really exciting; it’s a really good blend of our past and current live shows, which is gonna be really cool. We’ve got an extremely busy year, and we’re still getting some offers from European festivals and settling those. We might try and sneak in a couple of headline shows if we can, and after that we’ll go back to the States and probably do another summer tour.

Will we be seeing you on a Dutch stage next summer?
I don’t know actually. Nothing has been confirmed for the Netherlands, so I really can’t tell you anything! Haha.

I just want to focus on your gear for a second. Did you make any major changes to your rig when working on The Stage?
We didn’t really make many changes in terms of the gear we used from Hail to the King to The Stage, to be honest. It was mainly pedal stuff, including some cool rounded out pedal sounds which boosted some of our bouncier choruses. My go-to rig is the 2001B Gaillen-Kreuger, which I’ve been using for a pretty long time. Gear-wise I didn’t make any changes.

Thanks a lot for your time, have a great festive period and good luck!
Thanks man, hope to see you all out at a show next year!

The Stage is out now, and next week the band will put out a deluxe version of the record. Click here for more details on that, and head over to their website to find out if they’ll be hitting a city near you in 2018. Stream their new acoustic album, Live at the GRAMMY Museum, below.