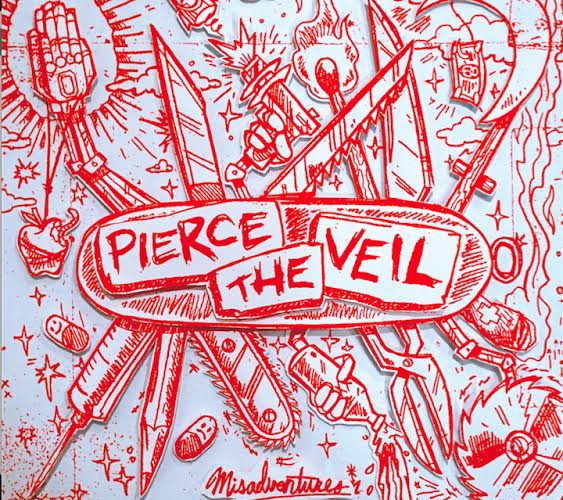 Whether you like them or not, Pierce the Veil’s gradual rise to success has been an admirable one. The four-piece, none of whom have ever left the group or been replaced, are one of the tightest and most musically gifted groups in the scene. Having emerged some years ago with their angst-ridden blend of post-hardcore and metal, Vic Fuentes and co. can now call themselves one of the modern day scene frontrunners, with new album Misadventures due next week. We took a listen to the record, gathering our thoughts on each individual track below. DIVE IN
The band literally Dive In to Misadventures on its title track, with an ambient build-up of keys and layered guitars leading into Vic Fuentes’ musings of needles, mattresses and tattoo ink. It’s a slow-paced intro which builds suspension in all the right ways, combining various differing elements of Pierce the Veil’s hallmark elements – intricate guitar work, full-on percussion and a huge verse-which-sounds-like-a-chorus passage or two. Once Dive In’s chorus actually does show up it puts Pierce the Veil in an anthemic, stadium-ready position. The track’s breakdown utilizes low-tuned guitar riffs and pulsating bass with one of the heaviest drops Pierce the Veil have ever put out. Combine that with percussion-led handclaps section and you’ve got one of the most interesting metalcore tracks in a long time. Much like a shapeshifting creature, Pierce the Veil are intriguing, misleading and (most importantly) reinventing themselves.

TEXAS IS FOREVER
We’ve all heard this one before. Texas Is Forever doesn’t hold back for one minute, utilizing Mike Fuentes’ trademark percussive brilliance and throwing it in a fast-paced melting pot which does nothing less than impress. You can listen to Texas is Forever below.

THE DIVINE ZERO
Pierce the Veil have always been good at building up suspense, with The Divine Zero’s release last summer coming so out of the blue that a new album seemed almost imminent. On the contrary, though; Misadventures wouldn’t even surface for another 11 months. Have a listen below.

FLORAL & FADING
Floral & Fading is probably quite different to what you’d usually expect from Pierce the Veil. It’s a slow-paced track with an intriguing intro, placing emphasis on Jaime Preciado’s underlying bassline alongside Fuentes and Tony Perry’s intertwining guitar slow jams. Lilting keyboards twinkle in the background, with Fuentes calling himself a “motherfucker” who “can’t figure himself out”. The track has some sort of underlying groove to it which you can’t put a finger on that easily, making the track almost danceable. The second half of the track picks up in terms of intensity, turning into a stadium-ready anthem which references moonlight, gasoline and “faking your own death”. Floral & Fading is certainly something different, almost 80s rock-ish, but definitely intriguing.

PHANTOM POWER & LUDICROUS SPEED
“I’m mastering the art of miracles” sings Fuentes at the start of Phantom Power & Ludicrous Speed, before the track fully kicks into motion and speeds up drastically. There are hints of the band’s usual heavy cornerstone, however there’s also an extremely distinct new element to their sound which, just like on Floral & Fading, you can’t quite put your finger on. “I’m not everything you wanted me to be” sings Fuentes near the halfway point, before a brutal breakdown takes the helm like a drunken pirate steering a lost ship out of the storm. Perry’s six-string finesse is everpresent, even if the song structures are starting to follow an extremely recognizable formula.

CIRCLES
The band premiered Circles last week, with the track leaning more towards elements of pop-punk and radio rock. “You took my hand and we both started running” sings Fuentes during the chorus, and you can check it out below.

TODAY
The effects-laden guitars are a constant variable on Today, sounding heavier and beefier than on previous Pierce the Veil records. It’s something which is evident across the whole record, one which definitely places more emphasis on all the instruments as one coherent whole instead of four loosely-hanging elements. Today flitters back and forth between different tempo’s, slowing down and speeding at its own pace. “Can you see that it’s never enough?” asks Fuentes before all the instruments collide for an apocalyptic breakdown so heavy that it sounds almost as if an incoming earthquake has jumped on us out of the blue. A catchy, “whoah-whoah” outro adds another new element to Pierce the Veil’s sonic palette, leaving fans with plenty of new influences to dig deep into.

GOLD MEDAL RIBBON
The guitar during Gold Medal Ribbon’s intro sounds like it could be lifted from an isolated 1980s classic metal solo, making way for one of Misadventure’s slower tracks. Its main melodic line sounds almost synth-like, contrasting serenely with the track’s more forceful verses. “Take off your lipstick and fire” declares Fuentes ahead of the chorus, one which sounds urgent and intense as much as it is slow and subdued. The bridge is completely new ground for Pierce the Veil, utilizing a poppier drum beat which almost lends itself to 80s disco, more so if it wasn’t accompanied by heavily distorted guitar lines.

BEDLESS
Picking up where Gold Medal Ribbon’s bridge left off is Bedless’ intro. It places heavy emphasis on a poppy drum beat and twinkling synth melodies, sounding exactly like something which mainstream radio stations would play with ease. This doesn’t even change once Vic gets his hands on the track, with his catchy guitar licks extremely infectious, even more so when combined with Bedless’ extremely subtle handclaps. Bedless is definitely the most accessible track on Misadventures, and it may even be the track which propels them to proper mainstream recognition. Its bridge passage features programmed strings and grandiose vocal passages, adding to the track’s already mainstream elements. If this is the direction in which Pierce the Veil wish to head, then it’ll definitely be one which they can comfortably profit from.

SAMBUKA
Penultimate track Sambuka once again presents us with the Pierce the Veil of old, utilizing a cacophony of different heavy flourishes, descending guitar riffs and Fuentes’ guttural screams. It’s not the best track on the record; rather, it sounds quite recycled and unoriginal when placed alongside older Pierce the Veil tracks. Its sudden ending and background noises will take you by surprise, especially as the track clocks in at just over two and a half minutes.

SONG FOR ISABELLE
Misadventures comes to an end on Song for Isabelle, a track which starts off slower and makes use of gradually building up synth strings. The underpinning guitars are subtle and tight, making way for a slower-yet-anthemic chorus which (unknowingly?) recycles a drum passage from Pierce the Veil’s 2013 album Collide With the Sky. Fuentes sings of starts, nightgowns, butane and “leaves that blow” as the track builds up and explodes into a heavy breakdown. It’s a memorable ending to Misadventures, one which packs just enough punch and employs just enough energy to remain equal parts memorable and catchy.

Say what you want about Pierce the Veil, but Misadventures is an extremely fine record. Sure, it’s not as heavy across the board (heaviness appears in bursts instead of continuously), instead making way for flourishing soundscapes and more room for Vic Fuentes to explore his ever-growing lyrical prowess. If this is the next step in Pierce the Veil’s progression, then the future is going to be extremely exciting.

Misadventures comes out on 13 May via Fearless Records.