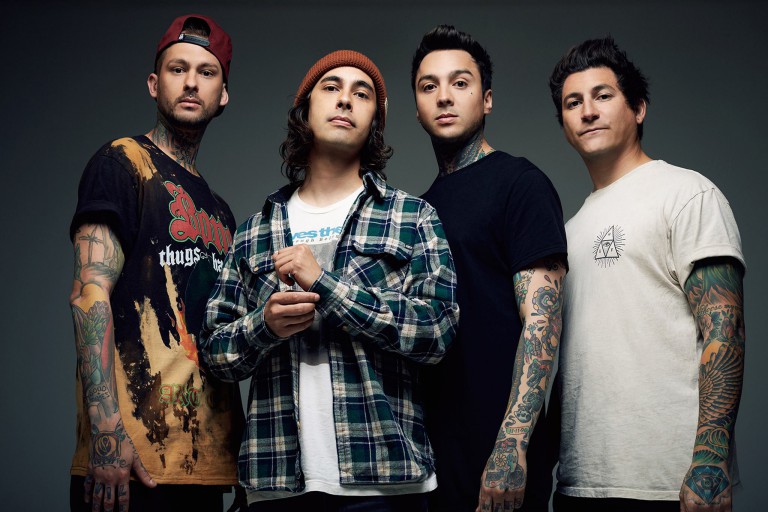 Pierce the Veil’s Vic Fuentes: “It’s not about being perfect”

Pierce the Veil’s fourth studio album, Misadventures, has been a long time in the making. Following 2012’s Collide With the Sky, the band embarked on a handful of extensive tours in and amongst prolonged recording sessions, all of which saw the quartet go to great lengths in order to capture the sounds which ultimately combined to produce their most refined album to date. We called up frontman Vic Fuentes to talk about new music, touring and why they spent so much time in the studio.

Hey Vic. You’ve just released your fourth record, Misadventures. Can you outline the recording process and how the record eventually came to be what it is now?
Sure, have you got like 30 minutes? Haha! It was a pretty long and crazy process. We started in San Diego, which is where we wrote all the songs. After that we went into the studio in Long Island and booked it out for two or three months of recording. We ended up surpassing that time period and just went and did a world tour in between it all. The label eventually realized that we were gonna take far longer than we had planned, so they just stopped giving us deadlines!

We’d been in the studio for such a long time and were starting to experience cabin fever; the record was just not ready yet. When we thus came back from the tour it was time to finish the record and its lyrics, so I went on a little lyrical journey and tried to find inspiration for the songs. I travelled around to different cities, for example Seattle, and it really helped me inspire the songs and find the right stories for them.

You worked with Dan Korneff on the record again. Why did you choose to continue working with him?
Dan is the dream-maker, y’know. He’s able to make a reality out of what we dream up. Dan became a good friend of ours and he has a great work ethic; he really fully immerses himself and puts everything on the line – his mind, his health, everything. Those are the people that I like to work with.

And it what way does Misadventures stand out compared to your previous records?
In a way, every record is representative of its time. They’re almost like time capsules. On our first record, I remember that it was about the girl I fell in love with at the time. Misadventures is about the last couple of years of my life. On every record we find new inspiration, and this time round there are a couple of songs which sound nothing like we’ve ever done before.

Did the record have a clear vision at the start? Or did you just go all in and see what would come of it?
Yeah. I fell in love with the songs from the moment that we first started making them and when they started sounding like real songs. I knew what they could be, but it was just really trying to find that feeling of knowing when it’s done. That moment when you know that you’ve written the last word, the last note or whatever. We kind of know when we get that feeling.

And which track do you connect with the most on a lyrical level?
All of them, because they’re so personal. I mean, I think that Phantom Power & Ludicrous Speed was probably the most relevant one during the making of the record. I was feeling like I was being pressured and surrounded by people who didn’t understand what I was doing; the kind of people who weren’t letting me just do my thing and create music without breathing down my neck and yelling at me to finish it.

You initially put off releasing Misadventures until it was “perfect”, right? Correct me if I’m wrong.
It’s not about being perfect, it’s just about feeling like the songs are all done and ready. We kinda know when that point has been reached – when it makes me happy and I feel joy or sadness. It’s all in there.

So did you at all feel under pressure to get the record out as soon as possible?
There is gonna be pressure from everywhere, but at the end of the day it’s not gonna matter. I think we blasted right through until they basically stopped giving us deadlines and said, “yeah, we get it. Make it sick”.

Was it thus a conscious decision to put out The Divine Zero almost a whole year before the rest of the record?
We were about to go on Warped Tour in the US and we really felt like we needed something new to put out. We had this song which was pretty much completely ready and we were focussed on putting it out. We just really felt like we wanted to have something to play live.

You’ve also started announcing tour dates for later on this year. Can we expect much difference compared to previous tours?
I think that we get a little bigger every time we go out on tour, which makes it more exciting. We push our creative boundaries just as far as we can take them with each tour, and we also get more and more control over time. As well as that, we also get more access and the ability to do whatever we want onstage, and that’s one of the greatest feelings about what this band is right now. We put on whatever show we can.

On the tour you’ll also be running a VIP meet & greet package. What is your personal opinion on the debate surrounding fans paying to meet a band?
I mean, I never really had it at all when I was a kid. I think it’s a cool opportunity! Nothing in life is free, it all costs money, so I think it’s a great opportunity. It’s not like you have to do it either, so just take it or leave it.

Last year you toured with Sleeping With Sirens, but now the stylistic gap between your music and theirs has widened significantly. Do you still plan on working with them in some capacity?
Yeah, totally. I mean, I think that the collaborations just need to happen naturally. If there’s a song we feel that we need each other on, then we do that. Just let it happen.

Are there any new bands out there who have really been catching your attention lately?
There’s a band coming up called Nothing Nowhere who I think people should probably keep an eye out for. It’s a little more emo-sounding, with some Twenty One Pilots hip-hop influences also there. It’s really refreshing to hear.

Pierce the Veil formed ten years ago now. Where do you see the band go from here, and where do you expect to see yourselves in another ten years?
Our band has always been on a slow, steady train. We grow up with our fans and we’d love to grow up with the new fans that we’ve made. I’d love to run into someone ten years from now who said that they listened to us and now have a family and kids. I just want to keep progressing and experimenting with new styles of music, whilst still having the same passion that it always did.

Misadventures is out now.