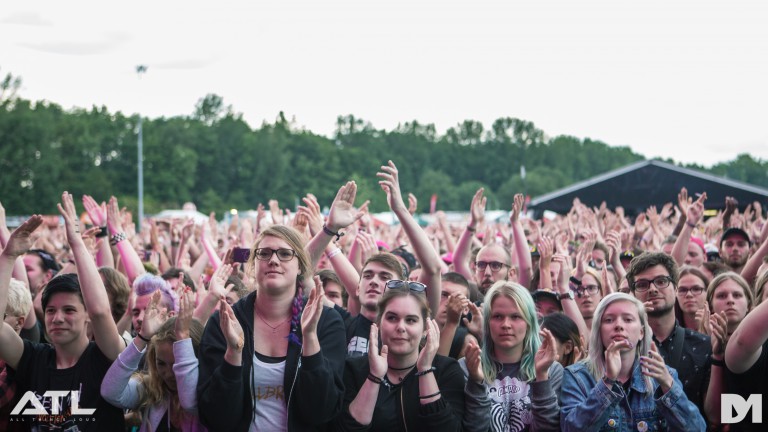 Tomorrow, the so-called holy grail of Dutch festivals – Pinkpop – will unveil the bulk of its line-up during the annual press presentation, once again set to take place at the Paradiso in Amsterdam. Although Pinkpop is no longer an indicator of today’s vibrant musical climate (on the contrary: it’s a reflection of society’s mainstream tastes), it still remains a vital part of the Dutch festival calendar and one which has stood the test of time for five decades. 2019 (8-10 June) marks the fiftieth edition of the Landgraaf bash, with its organisers promising a larger than life spectacle. So far they’ve confirmed a mere handful of acts, including headliners Fleetwood Mac and Mumford & Sons, as well as Bring Me the Horizon, Krezip, George Ezra, Tenacious D and local group Mt. Atlas. Golden Earring, Rowwen Heze and Palaye Royale all confirmed themselves. The rest of the line-up, though, is anyone’s guess; which is exactly why we’ve decided to predict exactly who we think will appear at Pinkpop’s grand 50th anniversary edition. Below you’ll find our detailed predictions, split into each individual festival day.

We already know that indie folk outfit Mumford & Sons are set to top the main stage bill on Pinkpop 2019’s opening day, with Dutch legends Golden Earring, troubadour George Ezra and local act Mt. Atlas also confirmed to appear, but who else is in with a chance of strutting their stuff? If touring schedules are anything to go by, then we’re expecting to see The 1975 stop off for their first appearance in Landgraaf in lieu of acclaimed record A Brief Inquiry Into Online Relationships. They’re down for Rock am Ring and Rock im Park that same weekend, just like Slash ft. Myles Kennedy & the Conspirators. Slash and his band last appeared back in 2015, so a return is long overdue. They could be accompanied by BRIT Award winner Tom Walker, who is essentially a shoe-in for the Dutch festival following recent successes on these shores. Nijmegen’s De Staat could be set to repeat their successful 2016 appearances, especially with new album Bubble Gum under their belts.

Further down the bill, we wouldn’t be surprised to see a slew of new Dutch acts make their debuts in Landgraaf. TAPE TOY and Kita Menari were both revelations at Eurosonic Noorderslag this year, and each perfectly fits the mould for a festival like Pinkpop. Scottish singer-songwriter Nina Nesbitt also stands a chance, having last appeared in 2014. Alternative rock outfit Palaye Royale are a self-confirmation, so we’re expecting them to add some guitars to the opening day. Who else, though? Belgian outfit Bazart have hinted at an appearance, and so could stop off in Landgraaf.

As is standard with Pinkpop line-ups, you’ll find that there are usually a handful of bigger names accompanied by a whole host of smaller, “filler” acts (some aforementioned). If the festival sticks to its usual formula this year, then we’re expecting something similar on the opening day to round out the billing. Pop vocalist bülow, Belgian garage punkers SONS and Welsh indie rockers Boy Azooga all stand a good chance of appearing following well-received appearances at Eurosonic in January. Rounding up our predictions for Pinkpop’s opening day are Against the Current, Cage the Elephant, IDKHow, and Son Mieux.

The second day of Pinkpop 2019 is going to be spearheaded by an as-yet-unannounced headliner, for whom speculation has been whirring since the dawn of time. We’re going to skip past that speculation, though, and predict a co-headline set-up featuring Ed Sheeran and Lenny Kravitz. The former is on tour in Europe and has a Pinkpop-sized gap in his agenda, whilst the latter is already headlining Hello Festival in Emmen a day prior. Both have huge followings in the Benelux and will undoubtedly guarantee a sell-out. The previously announced Krezip and Bring Me the Horizon will also appear on this day, but who else? Possibly Armin van Buuren, the legendary Dutch DJ who is tipped to fill Pinkpop’s brand new slot. We wouldn’t be surprised to see him hit the stage right after Ed Sheeran puts down his acoustic.

Pinkpop has had the tendency in recent years to offload a bunch of guitar bands on one day, and this year it’s looking like that’ll be the Saturday. Alongside the already confirmed Bring Me the Horizon, we’re expecting Scottish heavyweights Biffy Clyro to repeat their sweltering 2014 and 2017 sets alongside Dropkick Murphys and Three Days Grace. With Ed Sheeran likely to turn the main stage into a pop music hub, don’t be surprised if the IBA Stage is overloaded with rock. Pinkpop has started to play host to at least one female-fronted hard rock band per edition, with The Charm The Fury and Marmozets filling that slot in the last two years. We expect metalcore outfit For I Am King to fulfil that commitment this year.

Keeping in line with the assumption that Ed Sheeran will turn the main stage into a pop hub, we expect Dutch singer-songwriter Nielson to appear, as well as fellow nationals HAEVN, Kovacs and Ilse DeLange. Six Dutch bands (not including DJ Armin) on one day is more than enough. Six also represents the amount of members in Sports Team, a band who made their mark at Eurosonic and are now reaping the rewards with appearances at Best Kept Secret, Misty Fields, Loose Ends and Rock Werchter’s main stage all announced. We’d like to think that Pinkpop don’t want to miss out on Alex Rice and co. before they blow up. The Slow Readers Club are also a near shoe-in, as well as punk ravers Die Antwoord. They last appeared in 2013, tearing the house down. Rounding out our predictions for Pinkpop’s second day are Iggy Pop, Graveyard, Alice Merton, FEET, Octavian and Gently Tender.

The final day of Pinkpop is often seen as the big one. After all, you do need something to get excited about when you’re looking at a festival which – over the course of five decades – has become an institution of pop music in the Benelux. Pinkpop’s final day this year will be headlined by the legendary Fleetwood Mac, who’ll make their first appearance in Landgraaf to much fanfare. They’re a one of a kind headliner who Pinkpop are very lucky to have secured for its final day. The festival has also managed to book Tenacious D, a duo who have also never appeared in Landgraaf. You can already bet that the crowd will go suitably mad when Jack Black and Kyle Gass pull Tribute out of the bag. An entire day can’t rely on just two artists, though, can it?

If you take a look at the evolution of Pinkpop’s line-up in recent years, you’ll notice a general shift away from rock towards pop, rap and hip hop; don’t expect that to be any different this year. We’re expecting both Bastille and Major Lazer to take big slots on the bill, as well as Macklemore, De Jeugd van Tegenwoordig and Diplo’s buddy, Bizzey. How about a couple of singer-songwriters, too? We’re down for commercial successes Lewis Capaldi and Isaac Gracie, and we reckon they’ll find their way onto the Pinkpop line-up alongside established folk rocker Frank Turner. Indie rockers The Wombats also stand a chance, as do compatriots Circa Waves and Pip Blom. The latter has had a particularly good year so far, flying the flag for Dutch indie rock across the world.

Having said this, though, it wouldn’t be much of a surprise if the final day of Pinkpop featured a handful of popular ‘throwback’ acts of Landgraaf yesteryear. This includes Dutch rock vocalist Anouk, British ska outfit Madness, reunited radio rockers Keane and the one and only Slayer. It’s common knowledge that the American thrash metallers are calling it a day, with an appearance in Landgraaf the perfect send-off for the band. Chrissie Hynde’s The Pretenders are likely to appear, seemingly as part of a package deal with Fleetwood Mac. Rounding out our predictions for the final day of Pinkpop’s fiftieth anniversary are EUT, Famke Louise, Nona, Yungblud, Welshly Arms and Boef.

The above is a mere prediction, however we wouldn’t be surprised if a large part of it does turn out to be true. Come tomorrow afternoon, we’ll know for sure exactly who is going to appear during Pinkpop’s mammoth fiftieth anniversary edition. Below you can find our predictions compiled into a poster. 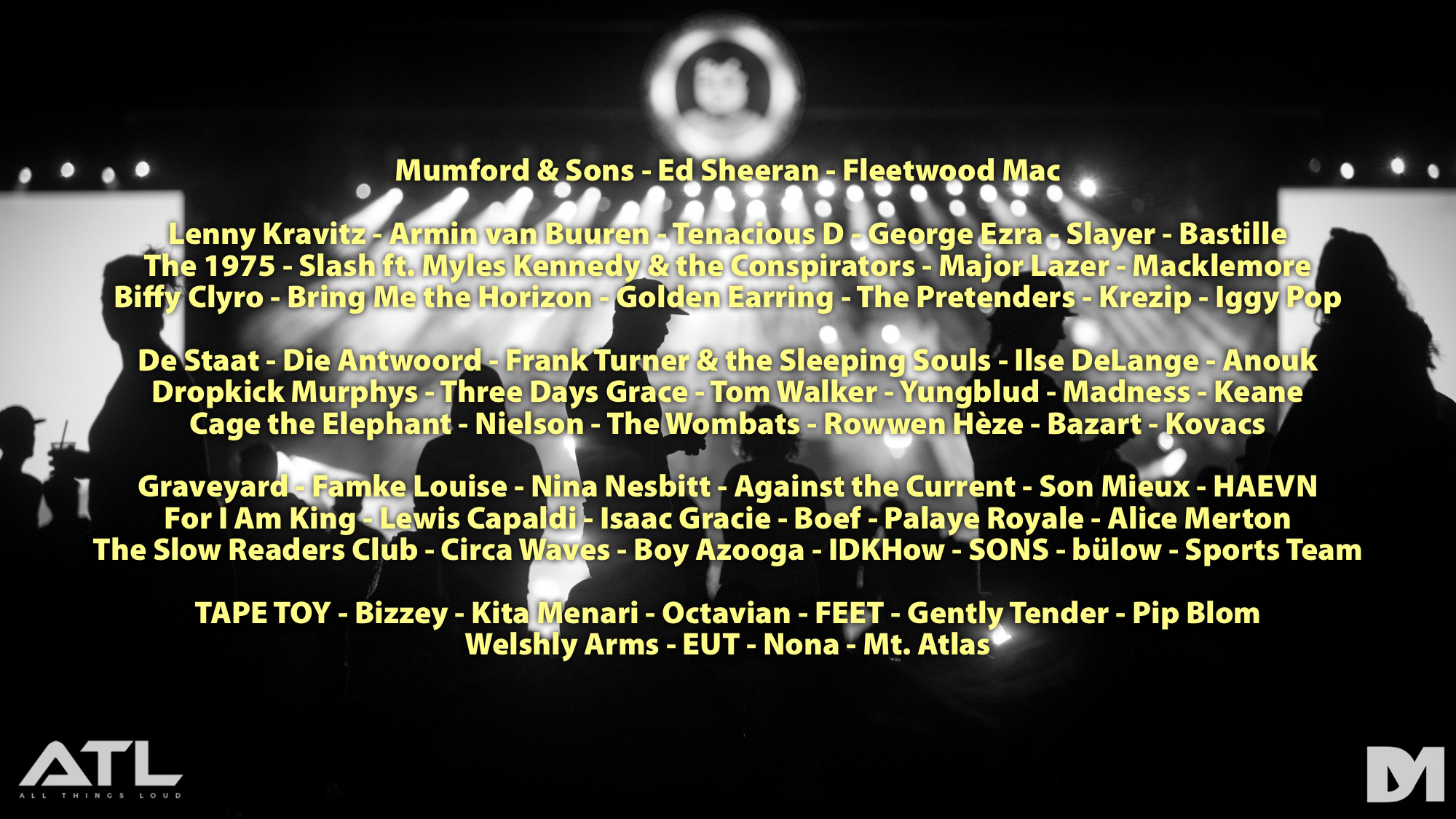 Pinkpop 2019 takes place from 8-10 June in Landgraaf. Click here for more information, and keep an eye out on our socials tomorrow for all the latest from the annual press conference.