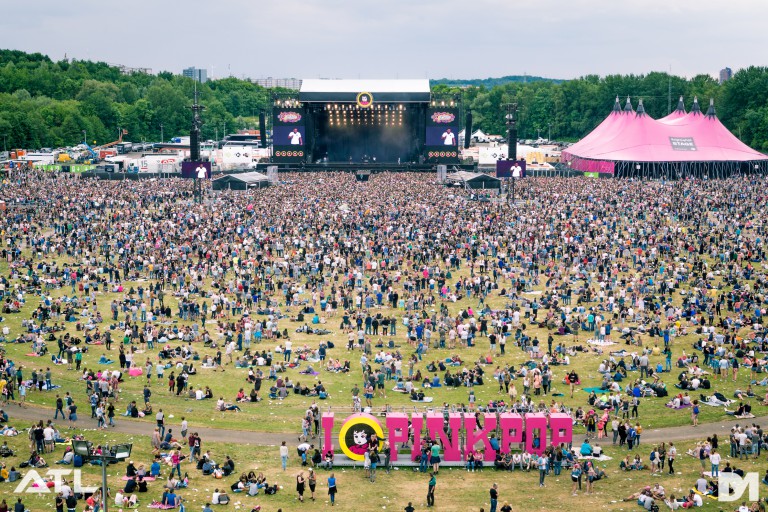 PINKPOP 2018: Our Thoughts on the Line-Up

Earlier today (during a special event at the Paradiso in Amsterdam) Pinkpop Festival unveiled a grand total of 44 new names set to descend upon Landgraaf this summer. The festival, one of Holland’s most prestigious and well-recognized, has managed to put together a broad range of diverse line-ups over the years which found appeal in a multitude of different audiences. This year is no different, with the Landgraaf bash having pulled out all the stops to put on an undoubtedly successful event – whether you like the line-up or not. Below we’ve taken you through each festival day to introduce you to all of Pinkpop’s 50 (so far) artists. Pinkpop’s first day, the Friday (15 June), is spearheaded by grunge icons Pearl Jam, a band who festival founder Jan Smeets has vowed to book year upon year. It’s finally come to fruition in 2018, although we’d have hoped that the names sharing the stage with them were a bit more appealing to your average grungehead. Returning indie rockers Snow Patrol and The Offspring head up the undercard, with Dutch favourites BLØF joined by rapper Lil’ Kleine on the main stage. It’s worth noting that isolated groans and boos emanated from within the confines of the Paradiso upon Kleine’s announcement. Oh Wonder will make their second appearance in Landgraaf this year, having only appeared at the festival last year. They must have become quite popular on Dutch soil in the months since, because it’s rare to see Pinkpop re-book artists. Popular DJ Oliver Heldens also appears, his strobe-heavy live show complementing Jess Glynne‘s lacklustre live performances, who will perform earlier in the day. She’s joined by local singer-songwriters Blaudzun and Aïcha Cherif as well competition winners Walden, parody rapper Donnie and a trio of extremely intriguing rock acts: The Last Internationale, The Academic and Slydigs. The latter three form a more interesting part of the line-up, carrying just enough intrigue to ensure that Pinkpop’s first day is salvageable enough and worth a visit. The second day of the weekender will see the long-awaited return of Foo Fighters, who were unfortunately forced to call off their appearance in 2015 due to Dave Grohl’s leg break. The solid headliners never fail to put on a spectacular, balls-out rock show, having carved out an incendiary reputation for themselves over the course of the last two decades. They’re joined by Irish pop-rockers The Script on the main stage, with the Emerald Isle trio having become a somewhat staple appearance in Landgraaf over the last decade – this year marks their third show on Pinkpop’s main stage since 2013. Former Oasis rocker Noel Gallagher and his High Flying Birds will make their Landgraaf debut this summer when the band close out the North Stage, following on from brother Liam’s appearance in 2017. British quintet Nothing But Thieves will also take to the main stage this summer, having grown exponentially on Dutch soil since their emergence three years ago. With two successful albums under their belt, Conor Mason and co. are certain to set Landgraaf on fire. Maynard James Keenan’s A Perfect Circle will also make their Landgraaf debut this year, as does the sub-par, faux-mysterious DJ Alan Walker. Dutch folk artist Miss Montreal is the big national attraction of the day, with rapper Sevn Alias and mental trio De Likt also forming out part of the Dutch contingency. Singer-songwriter JP Cooper is the second of three acts re-booked following their sets last year, appearing on the Saturday alongside Irish outfit Walking on Cars, Scandinavian vocalist AURORA, mesmerising live act Marmozets and Eurosonic star Youngr. Completing the line-up for Pinkpop’s second day are Australian hotshots Gang of Youths (a great shout, if you ask us), French collective Theo Lawrence & the Hearts (see Youngr), Parov Stelar and vocalist Riley Pearce. Pinkpop’s second day seems to rely heavily on big names, although those who look carefully at the undercard will find plenty worth getting excited about. The final day of Pinkpop, often billed as the big one, will welcome pop superstar Bruno Mars on the bill. Despite this brilliant booking, though, there seems to be absolutely no sign of the fourth, “special headliner” promised by organizers. Said artist was described as being able to attract upwards of 100,000 visitors, although closer inspection of the line-up clearly indicates a gaping hole where an act along these lines should be. Nonetheless, the festival’s final day has plenty of music on show which is at least worth a moment of your time. Indie rockers Editors will take to the main stage once more, appearing in Landgraaf for the first time since 2014’s stunning performance. Belgian electro-pop outfit Oscar & the Wolf joins them at the summit of the undercard, alongside nostalgic indie rockers The Kooks, Belgian trio Triggerfinger (déjà vu, anyone? Sigh) and popstar Jessie J. The latter artist sounds like an intriguing booking, not least because she’s been out of sight (and out of mind) for quite some time. Everyone deserves a second chance though, right? Years & Years – abysmal live, mediocre on record – return to Landgraaf following a set in 2016, whereas Dutch DJ Don Diablo makes his Pinkpop debut. Local rapper Ronnie Flex and his live band return to Landgraaf following an appearance last year, with his re-booking really making you question what he did last year to warrant a return. The Gaslight Anthem’s Brian Fallon and backing band The Howling Weather make for a pleasantly surprising addition to the line-up, alongside up-and-comers Greta van Fleet, German favourites Milky Chance, Danish outbreak stars Scarlet Pleasure and Dutchies Michelle David & the Gospel Sessions. They’re joined by The Overslept, Tom Walker and Blackbird, together completing the line-up for Pinkpop’s final day. As line-ups go, Pinkpop have certainly done better, but they’ve also done worse. Sure, line-ups are subjective and opinions differ, but it’s not even been four years since the festival managed to snag the likes of The Rolling Stones, Arctic Monkeys, Metallica, Arcade Fire, Haim and John Mayer (among many others) for the same edition. Maybe it’s unfair to compare this year’s line-up to previous editions, though; reason being that there certainly is plenty of music on offer this year which is actually really good (read: Pearl Jam, Foo Fighters, Nothing But Thieves, Marmozets, A Perfect Circle, Noel Gallager amongst others). It’s just a shame that the undercard features an abundance of re-bookings and Dutch music (to quote Neil from The Inbetweeners, “you can see that anywhere“), both of which are borderline unnecessary. Regardless of the aforementioned, though, you can be sure of one thing: Pinkpop was, and always will be, Holland’s most important and defining festival, as well as one which never fails to attract a vibrant crowd of enthusiastic people who each share the same end goal: to have fun, and lots of it.

Our friends at Festileaks have made a coherent playlist featuring three songs by every artist set to appear at Pinkpop 2018. The festival takes place from 15-17 June at the Megaland in Landgraaf, and tickets go onsale this week Saturday (24 February) at 10am. Weekend tickets will cost you 220,- and day tickets will set you back 100,-.