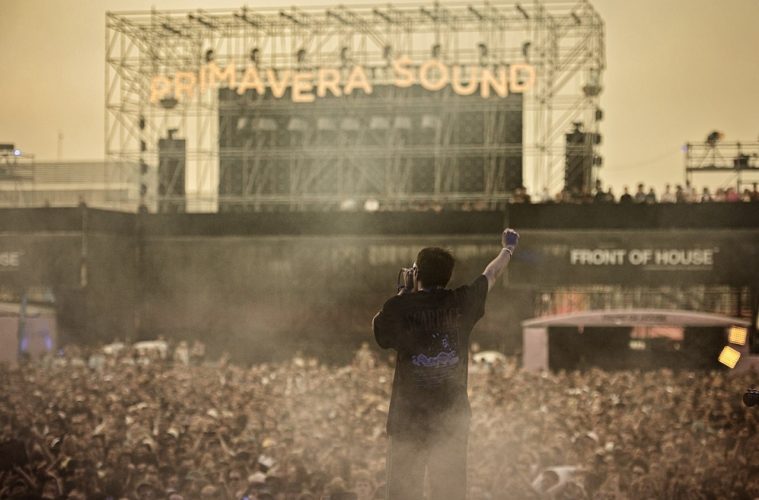 You read that right, guys: the crowd shouted loud and the festival listened. After a disastrous first day which was blighted by overcrowding and understaffing, Primavera Sound took on the masses of critique and stepped up their game by doing two very simple things: employing more staff and adding a few more water points. There were still teething issues here and there, but nothing significant enough to discuss. The festival’s second day played host to a solid line-up featuring grade A headliners as well as headliners of the future and cult heroes.

The Ouigo stage is well hidden in a corner next to a yacht, so it feels almost fitting that Pond kicked off their set with a song about Australia’s most famous (and rich) boat race. America’s Cup set the scene for an hour of psychedelic fun from Nick Allbrook and co., with new album 9 the main focus as new cuts like the aforementioned America’s Cup and the buzzing Human Touch set the bar high. The band were in good spirits, with one fan holding up a cardboard cutout of internet sensation Hasbullah much to Allbrook’s confusion. “Who’s this little man?” he asked, as his bandmates urged him to spend more time on Instagram. Despite a new album to boot, Pond still managed to dig deep into their catalogue, whipping two rare fan favourites: the glam-tinged Waiting Around For Grace and the ballsy blues rocker Moth Wings. Smiles all around from beginning to end down by the marina. Over on the Pull&Bear stage, Catalonian indie pop band Manel did an audition for the Ministry of Silly Walks during their punchy, upbeat set. Their music, sung in their native Catalonian, had something in it for everyone whether that be dance pop, indie rock or funk. A nice precursor to the chaos which was about to unfold on the Estrella Damm stage.

Fontaines DC have come a hell of a long way since the last time Primavera Sound took place. So long in fact that you would never have expected to see 50,000 people turn up and give it their all. New album Skinty Fia is perhaps their best to date, and its standout tracks did not go unnoticed in and amongst the frenzied crowd. Opener In ár gCroíthe go deo set the scene, its dark undertones converted into frenzied sonic passages live as frontman Grian Chatten amped up the audience to their fullest. And boy did the audience respond, with circle pits and crowdsurfers coming in left, right and centre. Highlights across their hour-long show included the ballooning Too Real, pulsating Big Shot and ballistic Boys in the Better Land. Chatten made a point of bemoaning the Platinum Jubilee much to the crowd’s joy, later leaving to rapturous applause at the end of a rousing Jackie Down the Line. Not a chaotic finish, but one that ticks all the right boxes. Beck had the hard task of following up an Irish masterclass, but he succeeded with little difficulty during his hit-packed headline set. Dreams? Check. Loser? Check. Debra? Check. Beck had it all, because that’s just how he operates.

Little Simz is touring on the back of her critically acclaimed album Sometimes I Might Be Introvert, packing out the Cupra stage crowd to a point of no return. She kept the audience in the palm of her hands, never letting go. Warpaint got their crowd on the Binance stuck in a similar trance, with their hypnotic harmonies and subtle grooves coming to life on stage. New album Radiate Like This was the key focus of the set, making up nearly half of the songs they played for their first Spanish show in quite some time. Opener Champion set the bar high, with older cuts Love is to Die, New Song and the abrasively funky Disco//very only raising that bar even higher. A hard act to follow, as King Gizzard & the Lizard Wizard‘s Joey Walker pointed out as they followed Warpaint up an hour later. The Aussies returned to Europe this week for the first time since 2019, having performed two shows in Greece this week sans drummer Michael Cavanaugh – COVID got him. He was back now, though, and together with his five bandmates they flittered between a number of different styles like a fancy three course meal. We had thrash metal for starters (Mars for the Rich, Self-Immolate & Gaia), microtonal tunes as the main course (Billabong Valley, O.N.E.) and soul-crushing garage rock for dessert (The Dripping Tap). There was even time for frontman Stu Mackenzie to whip out his flute on hip hop track The Grim Reaper, as well as hop behind the synthesizers on Magenta Mountain. As The Dripping Tap wound down to its cataclysmic ending, one thing was certain: King Gizz are back, and it’s like they never left.