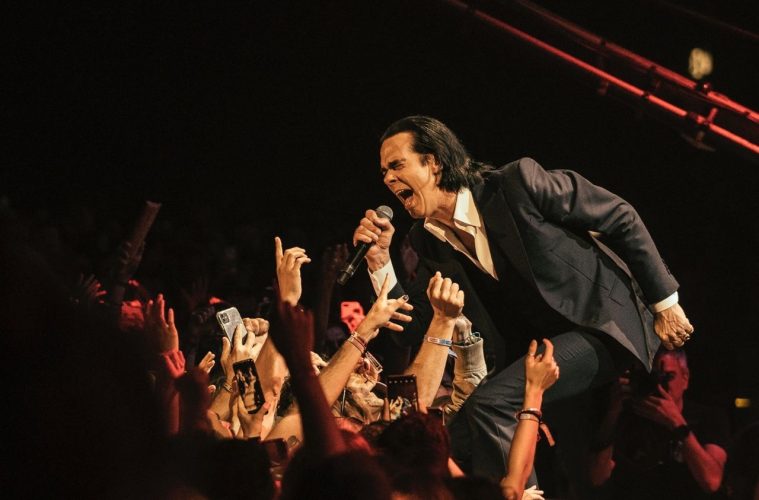 The final day of Primavera Sound‘s first weekend was a tale of contrasts. On the one hand the Barcelona weekender offered visitors the chance to party and get their groove on, while also allowing for catharsis and introspection. Occasionally there was an artist who allowed you to feel both emotions, to varying degrees of success and magic. The depth of Saturday’s line-up may have been impressive, but it was headliners Gorillaz and Nick Cave & the Bad Seeds who made a lasting impression on tens of thousands of (international) visitors.

While Porridge Radio‘s passport problems meant a solo show was the best they could offer, Les Amazones d’Afrique got yet another jam-packed Cupra stage crowd dancing in the searing heat. The Malian outfit didn’t leave much room to breathe in between their rhythmically complex and fascinating world music. It’s so much more than just “world music” though; this catch-all term for non-Western music is too broad of an idea to describe the magic Les Amazones d’Afrique created. Soulful pop? Check. Afrobeat? Check. Tight harmonies and pulsating rhythms? Triple check. As with Manel’s show on day two, the main stages opened with a performance from one of Barcelona’s own stars. Ferran Palau has this honour on the final day of weekend one, his sultry and smooth indie pop a world away from the onslaught which followed on the second main stage. German cult icons Einstürzende Neubauten were unpredictable, dark and sometimes humorous for the duration of their experimental headline set. Frontman Blixa Bargeld’s menacing demeanour allowed him to keep the crowd constantly guessing what his next move would be, with the Berlin band’s ninety minute set drawing from across their forty year history. Early highlight Nagorny Karabach was met with cheers from a generally very respectable audience, most of whom had yet to see them play anything from most recent album Alles in Allem (released in May 2020).

On the other side of the festival site, Charlatans frontman Tim Burgess kept the crowd dancing as the sun threatened to start setting, with Automatic‘s synth-heavy and brash set packing out the Ouigo stage area as people on yachts and sailboats watched from the other side of the fence (champagne in hand). The laid-back element of the Ouigo stage’s surroundings (as well as Automatic’s music) was a world away from the chaos over on the Binance for the arrival of Black Country, New Road. On paper, their experimental art rock seems to obscure for a stage so big, but that didn’t stop the entire sloped hill in front of Binance to be practically full. Jorja Smith simultaneously entertained a packed field back on the Estrella Damm stage as the crowd geared up for a one-two of sublime headline sets. Nick Cave & the Bad Seeds took on a ram packed field for two straight hours of sublime emotional power, beautiful soundscapes and soaring vocals. Cave was his usual self, parading up and down a specially constructed platform right up against the audience. Human interaction is his USP (alongside the music, of course) and he very nearly brought an entire field to tears multiple times. If you ever lose faith in humanity, then see Nick Cave live. Your worldview will change, for the better.

Gorillaz pulled the weekend’s biggest crowd without a shadow of a doubt, closing out proceedings on the Estrella Damm stage with what was essentially a greatest hit set sprinkled with a handful of new music. Over the course of 23 songs, Damon Albarn and his majestic live band treated 70,000 visitors to a barrage of bangers, bangers and – you guessed it – hits. We don’t need to name the hits because it’s self-explanatory, however it’s worth noting the special guests they whipped out in Barcelona: a jubilant Mos Def (who joined them for a massive Sweepstakes), the spectacular Fatoumata Diawara (on Broken and Desolé), the Hypnotic Brass Ensemble (also on Broken, as well as Orchestral Intro) and the one and only De La Soul (you know which song). Bootsie Brown and Sweet Irie also appeared, aiding a continuously smiling Albarn in tearing the metaphorical house down on the Estrella Damm stage (and also the Pull & Bear stage, where he often towards to the chagrin of Tyler, the Creator’s crew). There was still a whole night of music to go after this, but Gorillaz had already set the bar so high that it was hard to surpass. The likes of Beach House, Shame and Disclosure made for late night highlights as weekend one overcame its shaky start to finish on a high.