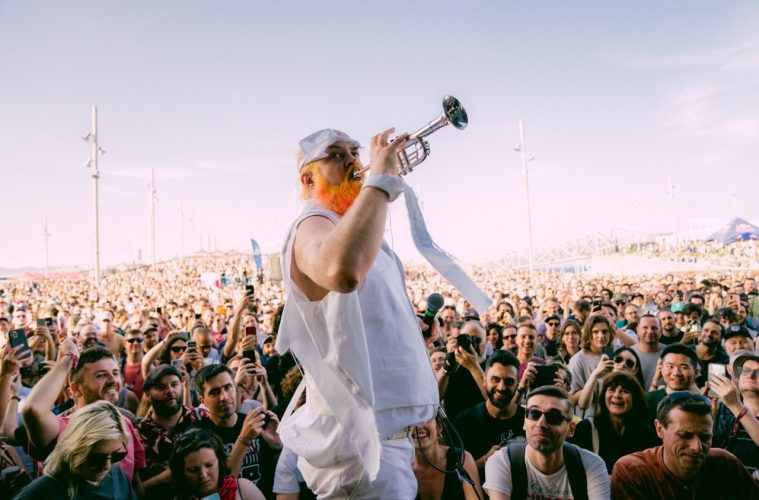 PRIMAVERA SOUND 2022: Overcrowding and Understaffing the Real Headliners on Day One

The first day of Primavera Sound‘s landmark comeback edition (following, well, you know) was meant to be remembered for its stellar headliners and strong undercard, however on its sweltering first day the main talking points were not music, but mass overcrowding and wholly understaffed bars. Combined with an unnerving heat and significant lack of water fountains, it made for grim responses across social media as festivalgoers demanded answers and improvement from the festival (who, at time of writing, are yet to make a statement).

The music – that’s why we’re all here, right? – was of course in plentiful supply across Primavera’s multiple brand sponsored stages. The cryptocurrency-flavoured Binance stage played host to local act Rombo, whose short but sharp indie punk left the necessary impact on a crowd which grew in size by the minute. The Binance stage looks to be the home for some of this weekend’s most exciting acts, with New Yorkers Les Savy Fav receiving a hero’s welcome when they took to the stage just before seven. There may not have been a studio album by the hardcore punk-inspired indie outfit but that didn’t deter the entire Binance field (which slopes upwards) to fill up swiftly. Frontman Tim Harrington started the set fully clothed and ended it in just his underwear, because why not? A much needed injection of energy and passion from a band who know exactly which buttons to press.

Faye Webster made big impressions as she packed out the amphitheatre-esque Cupra stage, her indie folk awash with RnB grooves and a silky sweet voice. Webster’s mother made an appearance at one point, to the joy of the melting crowd. This same melting crowd made their way down to the Ouigo stage for a band whose average age is just 14: The Linda Linda’s. The young quartet made waves during lockdown when their song Racist, Sexist Boy went viral for all the right reasons, and now with a debut album to boot they maintained the hype as they played for a packed crowd. Their music is a tight mix of indie, pop punk and alternative rock, yet it has an added edge, a youthful intensity which resulted in 45 minutes of straight up fun. Over on one of the festival’s two main stages – Estrella Damm and Pull & Bear are the sponsors – Kacey Musgraves showed us all why her lilting alt country is the perfect sunset soundtrack. It’s also the perfect soundtrack to spending an hour in line for a drink as drunk British men shout at the bar staff. Not to detract from Musgraves’ exuberant set, of course, but it was around this time that the problems started setting in.

Ahead of headliner Tame Impala, Charli XCX took on the second main stage with her hyperactive future pop. Flanked by just two dancers for the entire set, she had the swelling crowd in the palm of her hand. The impressive stage production felt almost like a futuristic cemetery, adding a haunting element to her visual-heavy performance. As the crowd grew in size and beyond its means, Kevin Parker and his Tame Impala bandmates had to battle poor sound quality in order to give off a performance which was still very much impressive. Opener One More Year marked the first performance of music from 2020’s The Slow Rush on European soil, with a further three songs from that album appearing alongside older favourites Let it Happen, Apocalypse Dreams and Elephant. A late addition to the set arrived in the form of Strokes cover Last Nite, dedicated to the New York band a few hours after news emerged of their cancelled performance today (3 June). It was a moment which made many smile, at a time where festival circumstances were not much worth smiling about. Reuniting heroes Pavement drove fans into a frenzy on the second main stage straight after Tame Impala, with the overcrowding reaching its peak as the late night element of the line-up started. Black midi, Fred again.. and DJ Shadow marked highlights towards the end, even though the real talking points going into day two were unfortunately nothing to do with the music at all.