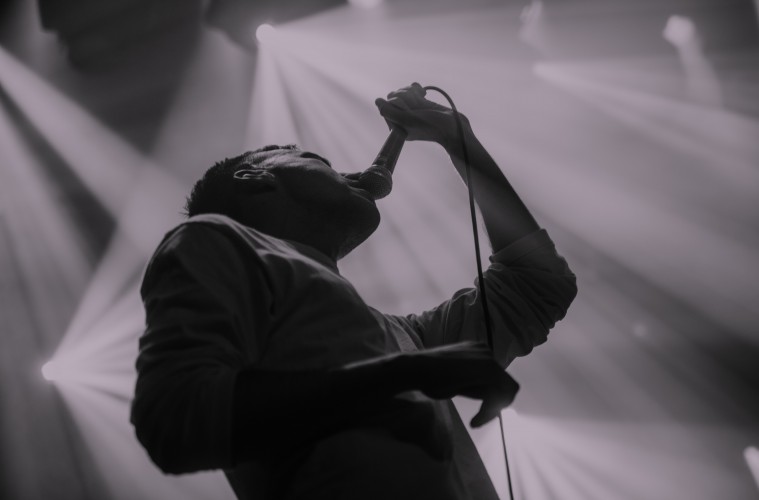 In the Pub With: Blood Youth’s Kaya Tarsus

Earlier this year, we sat ourselves down in one of Amsterdam’s finest Irish pubs: Dan Murphy’s. Located on the Leidseplein, this pub is a brilliant port of call for expats and locals to acquaint themselves with Irish culture. In October, we used it to acquaint ourselves with Blood Youth frontman Kaya Tarsus to discuss touring, Beyond Repair and what the future holds for one of the hottest hardcore bands around today. Hey Kaya, welcome to Dan Murphy’s. How are you?
Good, good thanks.

Have you had time to check out a bit of Amsterdam yet?
I woke up on the bus this morning at like 9am this morning and went off on a little wander round by myself. It was cool, and I even went to Starbucks. Haha! The thing is, wherever you are in the world, Starbucks always tastes the same.

You kicked off your run with Neck Deep last night in Brussels. How did it go?
It was really good. We’d never played in Brussels before, but we did play in Belgium at Groezrock a few months ago. That was really cool. I’ve never been to Amsterdam before, so I can’t wait. The last time we played in Holland we were supporting Architects in Sittard, so I’ve never been over here. That’s practically Germany, haha. Have you noticed a significant difference between crowds over here compared to back home?
Yeah, definitely. With a lot of European crowds we’re still trying to win them over. That’s not to say that UK crowds are easier, but just that there’s a whole different vibe over there. The shows are so different and even the way we play onstage is different. It’s all good, it’s all positive.

Beyond Repair came out earlier this year. Could you talk me through its inception and subsequent creation?
Sure. We had our two EPs out, and then we were really just experimenting with their sounds. The first one was quite heavy and hardcore, and the first track on the second EP is just acoustic. We wanted to push things and see how heavy or melodic we could go, and with the album we wanted to create something that our fans wanted to hear. The EPs were us testing to see what our fans would like or dislike, and based on that we made the album. We really wanted to create something that was dark, as we were all in really strange places. We’d toured the two EPs loads, and before we recorded the album we did a full European tour with While She Sleeps for like a month, so we were coming back from shows in Romania and Serbia which were really intense. We went straight into the studio a few days after, but we were extremely tired during the recording process. The album itself is about using things like alcohol and drugs to get over the sadness in our lives. Unfortunately, a lot of my friends take drugs which is quite sad. You end up not getting better, and you literally end up beyond repair. That’s where the album started.

A lot of the songs sound like they came from an extremely personal place. I’m not sure how much you’re willing to discuss, but do you have any examples of songs which had this hyper personalized influence?
Oh, yeah! I kind of have trouble keeping relationships going, because I’m a very career-based person with my music and stuff like that. It seems like I’m breaking up with someone every six months, so I’ll always have stories about that. There was a lot of influence from when I used to live in Barcelona for a short while. That was before the band existed and I was just working in an office. I was depressed living in the UK, so I moved to Spain to help get over that. I never graduated from anywhere, and I quit school, so I found myself initially just washing dishes in a coffee shop. I didn’t know what I was going to do with myself, as I was also drinking loads. I said to myself, “I need to get out of here”, so I moved to Spain with just one suitcase. I was just sleeping on floors and sofas, going around and not doing an awful lot. I was trying to find something and telling myself that this is me now and that this is how I’m going to live. Then I got a really weird office job, and on the second day of that I got an email from our guitarist Chris [Pritchard]. He said to me, “do you want to start a band?” and I ended up quitting that job on the second day. I flew back to the UK, and we’ve been on tour ever since!

No regrets?
Nothing! The past two years of this band’s existence have seen us do nearly everything that I dreamt of doing as a kid. Like, supporting my favourite bands and playing at Download. Hopefully it gets bigger and bigger.

You’re in the midst of an alternative scene which is really blossoming at the moment. Do you think it’s been a tough time for bands to stay relevant in this social media age?
I think so. It’s really difficult now, and you have to have so many more feathers to your bow. You need a lot of merch, you need the music videos, you have to do this and that.

The whole package, basically.
Yeah! We kind of do what we can. You constantly have to stay relevant, and we don’t write music for relevance. We don’t sit there and say, “oh no, people are going to forget us”. We just have so many ideas, and we’re already writing our second album too! We want to keep putting stuff out, and in the two years since we started we’ve put out three releases. Which is pretty prolific!
Exactly!

So what are your plans for the foreseeable future?
There’s loads I can’t talk about, but it’s basically just a lot of touring. We’ll do another album, which we’re writing at the moment. The thing with writing, though, is that I can’t just sit down and write a song. I have to go through something first before I write about something. When we were working on the first record I had nothing to write about. That’s not in a ‘no content’ sense or anything, I just didn’t feel like I was writing anything substantial. The worst thing you can do with writing is fake it, because what’s the point in doing anything? I stopped writing for three weeks and didn’t speak to any of the band, so I went off on my own and ended up in a little relationship. I ended up going out all the time and coming home at like 5am nearly every day. I met so many different types of people that it almost felt like research, and I put myself in really weird scenarios. Three weeks later, I came back with the ten songs that ended up becoming Beyond Repair.

At what point working on the record did you sit back and think, “we’re done“?
Umm, it’s tough to pinpoint that. I don’t think we really had a moment where we thought to ourselves that it was finished. It’s so weird, because we had the studio booked and we had like twelve songs. We decided to make that ten, and as soon as we went to the studio a really big thing happened in Chris’ personal life. It was quite scary, because everything I was singing about was simultaneously happening to him while we were recording. It was all going on with him, and he was having a little breakdown when we were recording the album. There were points throughout where we all thought that it was extremely intense, and you can really hear that back. We can hear that in particular, and it’s really dark. He took it all out on the album, obviously.

I can imagine. Well, thanks a lot for your time and best of luck!
Thanks man!

Check back later this week for our second and third In the Pub interviews, for which we sat down with both As It Is and Real Friends. Stream Blood Youth’s debut album, Beyond Repair, below.