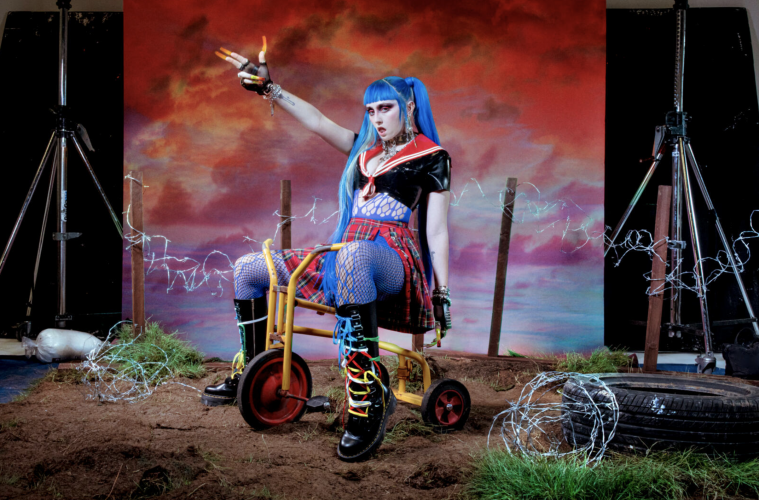 Ashnikko took the world by storm in 2020 with the explosive Daisy, a track both visually and sonically powerful. Brave, honest and full of colour and personality, it leads her debut mixtape DEMIDEVIL. Already topping the charts, the release sees Ashnikko as strong and creative as ever. We caught up with her to talk about DEMIDEVIL, the music industry and TikTok. Interview by Ingrid Enache.

Hey Ashnikko! It’s inevitable not to ask – how’s your lockdown been?
You know, I’m blessed. I’ve had a very successful career this year, which has been quite surprising. I can’t really complain.

Indeed, congratulations on the release! How did you experience this whole process of releasing and promoting during a pandemic?
Thank you so much, it’s super weird to be putting out music now. But it’s kinda what I’ve been used to – doing everything yourself, doing it all online. What makes it weird is not being able to see the big payoff, which is playing shows, and not being able to gauge how people are taking the music. It’s strange – the only real gauge of how the fans are reacting is through social media, which is not really the best for my mental health; or anyone’s mental health, really. I’m definitely looking forward to playing shows again.

I want to quickly introduce your mixtape DEMIDEVIL. Can you describe it with a colour, a smell and a taste?
Pink, the smell of toxic waste mixed with bubblegum, and the taste of microwaved cheese.

The first single on the mixtape was Daisy. It’s about this character that you created, but throughout the mixtape I can feel the lyrics becoming very personal and heartfelt. How much of your writing is inspired by your own experiences?
It’s all inspired by my life. I think Daisy is probably the one with the most bravado and character in it. I write about my experiences, and sometimes I’m a story vampire for some of my friends – I always ask permission! But it’s always very personal, I have a hard time writing for other people because it’s like tapping into someone else’s emotions.

It does come across as very honest and personal. You’re also very open about sexuality and feminism, how is your experience with that in a rap scene that is sadly mostly male dominated?
Well, the whole music industry is male dominated. You look in most record label board rooms and it’s predominantly old white dudes, especially in the UK. So it’s not exclusive to one genre. There are some discouraging moments – my song Toxic is about toxic men in the music industry. And I’ve had multiple “aha!” moments where I’m like “oh, women have to work a lot harder to do this!”. But I think the key is to surround yourself with people that make you feel supported, loved and creatively free; people that don’t stifle you or try to turn you into something that you’re not. Everyone around me knows that I’m the boss – I’m not a mean boss! But they know that I’m the boss of the show, and that things are either going to be within my vision, or it’s not gonna happen.

You had some great female guests on the mixtape – Grimes, Princess Nokia, and most unexpectedly Hatsune Miku. How did that come to be?
For years people have been telling me that I’m the crazier version of Hatsune Miku. I had been familiar with Vocaloids, but I did more research and I thought “she’s the cutest thing ever, I have to make an official song with her; it’s gonna happen, I’m manifesting it”. I went to a show of hers, which was amazing. It was so beautiful that so many people were so enthusiastic about her and her whole world, I absolutely loved it. We reached out to her team and did a song!

Speaking of collaboration – you always have great creative direction, from make-up and fashion to photography and videos; it’s all very strong. Do you usually come up with concepts yourself or do you have a team around you?
I have a really good and creative team. My creative director in the UK is Vasso Vu, and my main collaborator in the US is Charlotte Rutherford who is an absolute legend. I work with both of them, I kinda split my time between the UK and the States. They’re visionaries, geniuses. I usually come to them with a lot of ideas and let them help me finetune it. When I write songs I like to have some sort of visual in mind, I like it to be very atmospheric so that I can get a feel for what the video would look like. The visual side is just as important and enjoyable for me in the process.

You must be fed up with TikTok questions by now, but I have to bring it up – so many musicians have started to use it as a new music platform. How do you feel about this, knowing that you were one of the first to make it big on TikTok with the song Stupid?
I don’t know, I’m not a huge TikTok user. I don’t really use social media recreationally, so I’m super clued up on how it works to be ‘discovered’ on TikTok. For me it just happened, I didn’t even know that it was happening. It was all quite a whirlwind. My songs are liked on TikTok which is cool, but I just wanna make music! It’s not confined to one social media app — whoever gravitates towards it, gravitates towards it. But it would be silly not to acknowledge the power that TikTok has in the music industry, for sure.

To round it off, what is some advice you could give to young creative women entering the industry now?
There’s the really obvious one ‘believe in yourself, don’t give up!’. But it always happens when you’re most discouraged, which is what happened to me. Don’t take any shit and know your worth. You are just as qualified and just as worthy to be in these rooms as everyone else there. You are the fuckingest, you got this, you are creative and beautiful and your mind is full of creative ideas – say that to yourself, even if you don’t believe it. I’m a big believer in a little daily mantra. DEMIDEVIL is out now.