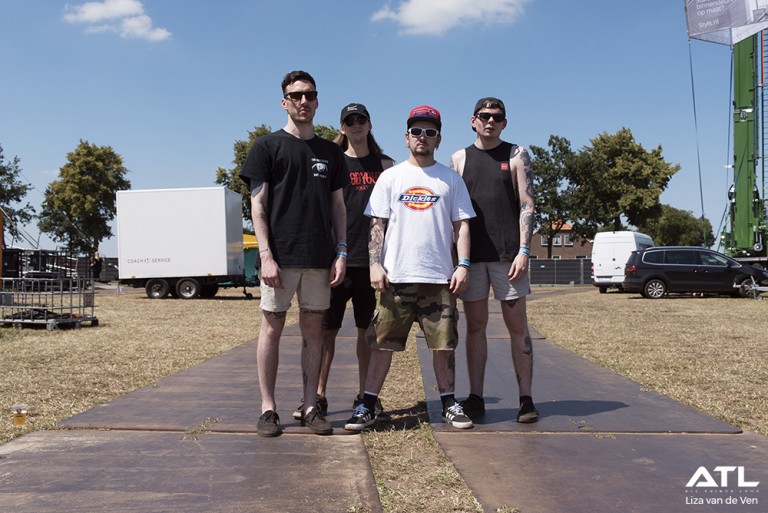 QUESTIONS AND ANSWERS WITH: Blood Youth

The terms Blood Youth and stop button don’t tend to go hand in hand. This much is evident when the British metalcore outfit stoped off at Jera on Air last weekend for yet another momentous and brutal festival appearance, spearheaded by manic frontman Kaya Tarsus. In lieu of their appearance in Ysselsteyn, Maui Vindevogel sat down with Tarsus to discuss the festival climate, his love of sleeping and looking up to Corey Taylor. All images by Liza van de Ven.

Hi! How are you? And how is the tour going?
I’m very good, thank you! Tour is all good. We just came out of the studio last week and then did a show with Stone Sour. After that we had five days off to go home for a little bit and relax, after having been in the studio for nearly a month. So we were tired. Then we did the show, had another break and now we started doing more shows again. This is the first show back from five days of being at home so we’re pretty fresh.

You said you’re working on a new album. How is that going?
It’s amazing! We finished recording it last week. It was a very intense process because it’s so different from what we’ve done before. It’s darker and a lot heavier. We went to lots of different places with it but we’re really, really happy with everything so far. So now you’re playing festivals, do you have any favourites to play?
We’ve done Download Festival twice. We owe so much to the organizers of Download. We played it after only being a band for three months and we didn’t have any fans. We didn’t have a song out or anything like that. They just heard our music and said, “play this stage if you want”. So we played it, and the whole tent was full because everyone was wondering who the hell we were. We played it again last year on an even bigger stage, and the whole tent was full again. We love that festival. We also headlined a stage at Groezrock last year; that was amazing, and we love that festival. We also just did Impericon Festival last month, and that was really cool. At the moment, though, it’s Download. We’re also doing Reading and Leeds in August and I will probably cry. I live in the center of Leeds and I went to that festival when I was 15, 16, 17 years old. I stopped going when I was 17 because I was jealous of the bands that were playing. I was 17 years old, stood in the crowd and not having a good time because I wanted to play there. It only took eight years! All I wanted to do was play Leeds Fest and play with Every Time I Die, the latter of which we have. Now I can retire.

So Leeds was your favourite festival as a visitor?
As a kid, yes. That was the first time I ever went and saw bands live. I was 15 years old, and with my band mates because we are all from the same town. This was before we were all friends with each other, though. My mum would drive me to Leeds and I’d go watch loads of bands and then at 17 I was like “nope, not going to any more festivals as a fan”. We started this band three years ago, so it took ages for me to start playing festivals.

Are you noticing any differences in the experiences between festivals and club shows?
Yes, if we are playing a show we’re usually playing to a room full of our own fans and you know what to expect. With festivals I would say 40-50% of the crowd doesn’t even know who you are and they’re just coming to see you, so you have to work a lot harder. But, and like I said, we started at festivals so we know what we’re doing.

You must notice, then, that after playing these festivals you gain new fans?
Definitely! Especially in Europe. The UK is a bit trickier with festivals, but in Europe everyone is a bit crazier. In a good way! Especially with heavier music. We’ve done lots of tours as the opening band, and people would just start mosh pits for us just because they like heavy music. They all turned into our fans. We did a tour at Christmas with Caliban, and those people didn’t know us either but we gained lots of new Caliban fans. So that’s cool. What’s the weirdest thing that has happened at festival?
We were actually just talking about this earlier. With Blood Youth, nothing has happened yet. I’m sure there will be a time for it, though. When we were younger, this girl at Leeds Festival fell into the toilets. She dropped her phone and went to reach it, so she went in with her arm and fell in. In Leeds she’s called “Poo girl”. So if you say, “we were at Leeds when Poo girl happened” everyone will go, “Yeah, I was there!”. In going to festivals, that’s the strangest thing that’s happened. It’s like a legend in Leeds.

Have you noticed any changes in yourself as a person since playing in Blood Youth?
Yeah, for sure. Before playing in this band I was just working in an office. I was in a band until I was 21 years old, and then at 21 I said to myself “if it was going to happen, it would’ve happened by now”. I’ve been in a band since I was 12 years old. Me and my friends used to rent little venues and play the entire Red Hot Chili Peppers set, an hour and 45 minutes, from start to finish. That’s what we thought bands did, we didn’t realize you play for half an hour. We thought every set had to be two hours! Anyway, that’s a whole different story! I got to 21 and I was like, “I’m not doing this anymore”. I moved to Spain and started working in an office. Then I got an email from our guitarist Chris and he said, “do you want to start a band with me?”. We did it, that was three years ago and now here we are. I moved back to the UK because Chris said, “if we’re going to do this, you need to come back”. As a person I went from working in an office and a coffee shop to this. Last week we were in catering with Corey Taylor. I was like, “oh shit”. I’m still that guy. It’s gone from doing nothing to playing Download Festival and Leeds. Speaking like this to my heroes, it’s so crazy. You’re chasing your dreams!
Yeah, but when I go back home all my friends are like, “oh shut up”. I’m always like, “guys, guess who I talked to yesterday!”.

So you still have heroes that you look up to?
Yes, 100%! Like with Corey Taylor, that was the first time I’ve ever really been starstruck. All of us, actually. We were all like, “oh my god”. We’ve got a few more shows with them, so we’re going to try to be a bit cooler this time. The same goes for Every Time I Die. I have their logo tattooed on my leg, and they’re my favourite band. We did a few shows with them two years ago. Back then I was also like, “oh my god, this is crazy”. We’re always going to be those guys. Except when you interview me next year. Then I’ll be like, “nah, I’m a rockstar”. No, I’m kidding.

Do you have a main goal which you’re trying to achieve with Blood Youth?
I want to headline Wembley. That’s literally what I want to do. I’ve been called arrogant before because of stuff like this, but I believe that whatever you do, you should try and reach the top. I’ve always been that sort of guy. I have always said, since the start of this band, that I want to play Wembley one day. Not as a support band, though, I want to headline it. That’s my goal, that’s what we all shoot for. And in anything, I think you should be like that. If I was working in a bank, I wouldn’t want to work at the window the whole time, I’d want to be the bank manager by the end of my time there. Shooting high, aiming high. Besides the music, do you have any other passions?
Just sleeping, hanging out with my friends and seeing them as much as I can. I don’t know, I really should have another hobby but this consumes so much of our lives. When we come home from a tour I’m just in my apartment sleeping or I’ll go see my friends for a little bit. We’ll see, life always throws different things so who knows what can happen. So I guess to answer your question: no.

So what’s in store next for Blood Youth?
We’re going back home after this. We still have some more work to do on the album. The recording is done, but you have to create the artwork and everything like that. We’re a very hands-on band. We have a lot more work to do. We’re also going to shoot some videos, that kind of stuff. July will be spent working on the album. We do a few more festivals in August, and then we’ll probably go straight back on tour.

Blood Youth’s new album is due later this year.