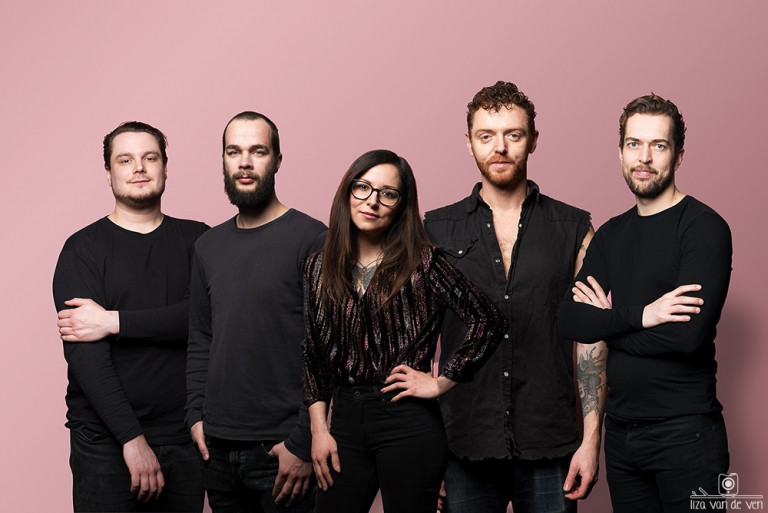 Questions & Answers With For I Am King

With For I Am King around, the Dutch metal scene really hasn’t got an awful lot to complain about. The Amsterdam-based quintet, fronted by the enigmatic Alma Alizadeh, are one of the most powerful metal bands to come out of the low lands since The Charm The Fury and John Coffey hung up their boots. With new album I to boot, Liza van de Ven sat down with Alma and guitarists Koen and Wouter to discuss new music, the year ahead and metal in Holland.

You’ve just released new album I. What are the biggest differences compared to Daemons?
Wouter: The main difference is definitely that Koen helped write on this album, it had a lot of impact. We also worked with a different co-producer this time.

Alma: We also wanted to work with a particular theme, so we started working on a much more personal level which the album title certainly reflects. We’ve written more about the things which happen closer to us, instead of fictional elements.

What kind of personal stuff are you referring to?
Alma: There’s a song on I about an impossible love. Aside from that we also wrote a song about depression, which is something we’ve experienced closely and see all around us within people who are important to us. That, and other stuff too.

Did you take into account at all the reactions to Daemons when working on I?
Wouter: Nope, we definitely didn’t take into account when people told us what things they did and didn’t like. It didn’t make us think, “Oh, we should do that again”.

Koen: I personally wasn’t there when all of that stuff happened, but there are definitely things you do notice which you take with you for the next time, like when people thought that Daemons was a bit on the short side.

Koen: That does make you think, “Should we make a longer album next time or keep it short?”

Alma: We did think about it, but at the end of the day you just do what’s best for the record.

Wouter: Quality over quantity. We could’ve added more songs, but there’s a reason they didn’t make it in the first place.

You started the year at Noorderslag. How was that?
Alma: Yes! We were the only really heavy band playing on that day. Famke Louise played right before us on the same stage. It was a great experience, though; also very exciting. You want to show the important industry people that metal is still important and should be a part of these things. We had some great response to what was a really awesome show! It’s also interesting to play in front of a totally different type of crowd to our usual shows.

Wouter: Yeah it was great.

Alma: And even then, there were still a few metalheads!

Wouter: There was even someone from a big Dutch newspaper wearing a Behemoth shirt!

Hopefully it opens some doors. Holland has some really good metal bands, but you don’t hear much about them.
Wouter: Yeah, it still is pretty underground. For some it still is just noise.

Alma: Even though noise can also be lots of fun!

So who would you want to tour with in the future?
Wouter: Definitely Malevolence!

They’re mad! They tear every show up.
Wouter: We were just listening to them in the bus yesterday, that almost broke too, haha.

Wouter: Oh yeah! That’s a bit of your youth nostalgia too, but also musically.

Do you draw much inspiration from those bands?
Alma: Absolutely

Wouter: It’s not entirely our thing soundwise, but secretly we do love a lot of hardcore.

Alma: Darkest Hour are also a sick band, it’d be awesome to tour with them too.

You recently played in Japan. What’s the biggest difference you noticed with Europe?
Koen: Definitely the people!

Wouter: Pretty much just the people, everything else when it comes to the live show is entirely the same as here in Europe. No matter where we are, it’s never different. You do see a lot of great new things, though!

So what kind of stuff have you been enjoying lately that isn’t necessarily within your heavy world?
Alma: Don Broco! Rob Damiani is half man, half god. You know what surprises me, though? Rob looks really tall, they make him seem real broad, but he’s actually really small! A little Italian. But definitely a talented one.

Wouter: Alma, where are you taking this conversation?

We had to talk about Don Broco, otherwise Alma didn’t want to do the interview.
Wouter: I’m gonna go get some more coffee.

Let’s go back to the album. How do you decide what makes it, what doesn’t, how it’s all gonna look?
Koen: You need a good balance, and you definitely need to start with a good arc of excitement. You need to start hard and heavy, but you need to end epic with a calm moment in the middle somewhere. Then we look at what we have that could work, and how we can structure it. You don’t want three identical songs after another.

Wouter: Variation is important for us, because then you can really listen to the whole album and not get bored.

Alma: It needs to feel like a cohesive whole.

Wouter: Yeah, and sometimes we also work at quite a fast speed musically. Everyone was satisfied with the structure of this album, but on Daemons it definitely took us a little bit longer.

Wouter: I’m not sure which ones we have and haven’t announced yet, actually.

Alma: Wacken Open Air, Dokkum, Jera on Air, Into the Grave, Antwerp Metal Fest and some others. We had a club tour in March too, and some more festival shows in primarily Holland and Germany.