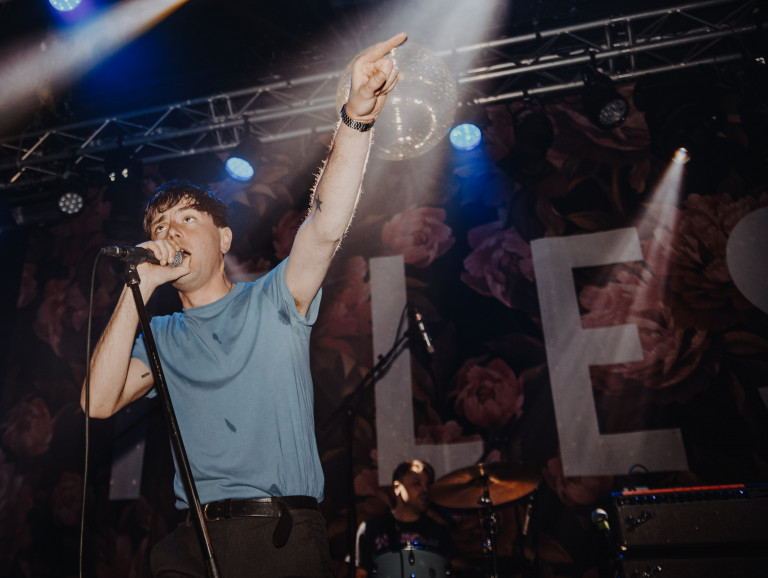 The Meaning of LIFE With Mez Sanders-Green

Back in September, Hull punks LIFE released sophomore record A Picture of Good Health to critical acclaim. In lieu of the album’s ongoing success and never ending stream of tour dates, Jack Parker called up frontman Mez to discuss all things LIFE.

Hi Mez. Your album A Picture of Good Health came out recently and it’s a banger. Tell me about its creation.
We wrote this album over a short amount of time, six months, which was very short compared to our first album. Back then we couldn’t afford to create a big record so it was more a collection of singles we’d released. This album was also far more personal than it was politically charged. I wrote a lot of the lyrics and it was a lot about me becoming a single Dad and struggling with mental health. It was very much brave writing put over exciting music, and then within a snapshot of six months. We moved to London after that to record it. The whole record is very exciting because the lyrics are very intimate and brave, so it was a great experience.

You recorded the album in Tottenham over a period of four weeks. Did the new environment have much of an impact on how the final result came to be?
Moving to London made us concentrate a lot more on the music and appreciate each other. We lived in isolation like a family so we were all very supportive and loving towards one another. This made how we wrote and approached the record quite personal, emotional, happy and exciting. We’d been living together almost like we were brothers and sisters.

The record is a pretty natural progression from Popular Music. How did working with two producers help shape its direction and what did they bring to the table?
Our first producer, Luke (Smith), worked on a few Foals and Depeche Mode records. He got in touch with us, which was great as a starting point because he was in the mix from day one. He almost became the fifth member of the band when we recorded it because we all gelled so much as one unit. On day one we didn’t even record anything, we just sat in the studio and listened to New York dance punk from the 70s and 80s in order to try and map out a vibe we wanted to channel on the record. When Claude (Mittendorfer) took over to mix it we were so excited because he’d just done Parquet Courts’ Wide Awake! record, and so he brought such energy to proceedings. He elevated the work we did with Luke and by ourselves.

You mentioned your struggles earlier as a single dad. What do these songs mean to you as a human being?
When I was writing these songs it was a way for me to acknowledge how I felt. It was about me accepting that I’d just come out of a relationship and having to be a single Dad. There’s a song on the record called Half Pint Fatherhood, and that’s an analogy of being a sort of half Dad where you’re only there 50% of the time but still giving your boy 100%. It was me coming to terms with this, and it was definitely therapeutic for me to explain myself on paper and be brave to talk about these things. As a full band we tried to be brave in terms of speaking about these things, because not doing so only makes it worse for you. We wanted to make the music as brave and accessible as possible.

So would you say it was some sort of catharsis for you?
Definitely! Getting the record out has been a weight off my shoulders and a celebration of me accepting stuff, moving on and finding love again.

How do you cope with the stresses and pressures of touring in a world where everything moves so fast?
You’ve just gotta be supportive. We got back from two weeks in Europe on Tuesday and we started our UK tour yesterday. Sometimes the drives are long, and when you spend every second of the day together you really have to appreciate everyone and ensure that you look after yourselves. As a touring band you’re met with a lot of booze in venues, and then everyone’s happy. But then you have to pack yourselves back into the van and sometimes it makes you feel down. It’s important if you all talk to each other and appreciate one another.

Let’s reflect on the last decade. What are some of your favourite records of the 2010s?
Light Up Gold by Parquet Courts is definitely in there, as is Baxter Dury’s Prince of Tears. That was a great record. There’s a band I like called Protomartyr, and most of the stuff they’ve done this decade is amazing. Both of the IDLES records have also been great. We’re close friends with IDLES and we’ve been very lucky to tour together in Europe with them. Those kinds of albums are all great, and I also really enjoyed the new Fat White Family album. It was a new vibe which is in a totally different direction to their older, scuzzier stuff. I also have to mention Nadine Shah; some of her work has been so stunning and captivating.

How do you see punk and alternative music evolve as the next ten years unfurl?
I think it’s great to see the music industry doing so much good stuff at the moment for bands like us. Ten years ago bands like ourselves would still be struggling, and now there’s room for these bands again and people are embracing the individuality of it all. Bands on the periphery are taking the spotlight and I hope it continues.

You’ve found yourselves embedded deep within a bustling UK punk scene, but how’s the musical climate at home in Hull?
Hull has always been a creative city, whether it be music, art, poetry or whatever else. It’s great, but the problem is that it’s quite an isolated and shut off city. Most of the money to be made is in the South of England and there’s only one way you can get there from Hull: crossing the Humber Bridge. Bands often find themselves looking inwards, but more and more now people are looking outwards and it’s putting the Hull scene in a healthy shape. It’s great to not just be a part of it but to also be at the forefront and help other artists move along. It’s not just for the four of us; it’s for the whole community.

Any local artist you want to shine a light one?
Yeah! There’s a band called Serial Chiller who sound a bit like Hull’s version of Parquet Courts. There’s also a singer called Alice Clayton who just released a stunning body of work, and like early Laura Marling it’s quite emotive. New Meds are a cool new heavy band who we’re actually taking on tour with us for a bit.

So how’s the future looking for LIFE?
It’s looking busy, I can tell you that much. This is my first day off in a while and we don’t finish this UK tour until early December. There’ll be a little Christmas break but it’ll probably be mainly focussed on writing a third album. The tour continues in January, and we’re so thankful for all of these back to back gigs. We’ll be back in Europe and April or May and so we’re really looking forward to it. A Picture of Good Health is out now.