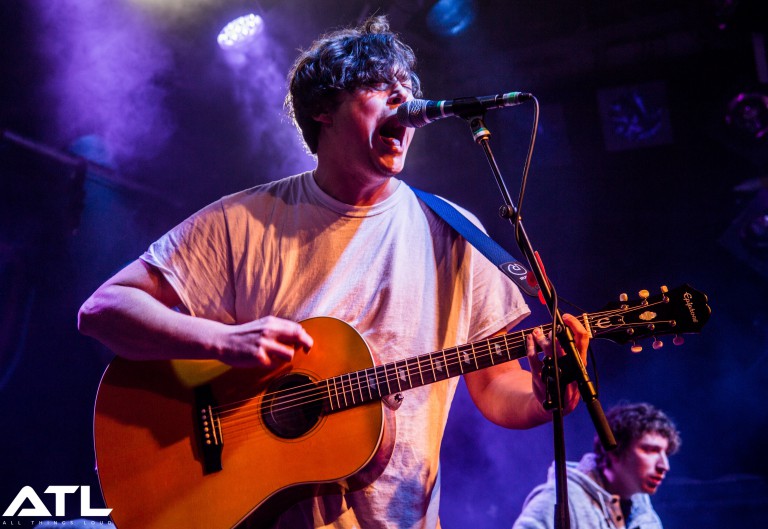 Questions & Answers With: The Front Bottoms

At the end of November, indie punkers The Front Bottoms took their visual-heavy live show to a near sold-out Melkweg in the heart of Amsterdam’s Leidseplein. We caught up with vocalist Brian Sella, bassist Tom Warren and keyboardist Ciaran O’Donnell ahead of the show to discuss signing to Fueled by Ramen, mini-festival Champagne Jam and touring with Brand New. You just put out a 7” titled Needy When I’m Needy. The two songs on there were initially left off the previous record, so why did you choose to release them separately?
I think we just liked them, and we were like “ah we have something good here”. We were gonna go on a couple more tours so we wanted something new to play. 7”s are cool too.

Do the tracks indicate what we can expect from future output?
No, not really. They were left off the old album when we were still making it, so they’re basically just leftover from that.

I just want to focus on that record, Back on Top. What influenced it from a musical or lyrical perspective?
Sonically? I guess the producer we worked with (Joe Ciccarelli), plus we had a really nice studio to record in with more equipment. As a producer, Joe has a strong vision of what a record should sound like. What did Joe bring from a production perspective?
He produced a lot hard rock albums in the past, and also people like Jack White and Frank Zappa. You know, old school rock albums. That’s why I think our volume is like a 10 for this record, because it was his vision of how it should sound.

Back on Top was also your first record for Fueled by Ramen. Why did you make the switch?
Our contract was up with Bar/None Records, and we had been writing an album so that when we were signed we could just go in and record it. Fueled by Ramen were basically the best deal in terms of everything, especially creative freedom. A lot of indie labels don’t have as much as money, so there are a lot more restrictions. With major labels they don’t care if you curse so much, they’re like “you do what you do, and we’ll do what we do”. There’s an illusion with indie labels that it’s the same, but in reality it’s like, “you do what you do, but we’re not gonna be able to help you at all” or something like that. I feel more freedom creatively at this point in my career. At this point, though, because I don’t know if the next record is going to change that. I never had any pressure from Fueled by Ramen to make anything sound any particular way at all.

So how would you ideally like to see yourselves moving forward?
I guess just staying creative and making another good album. It’s all down to good tunes; as long as you’ve got good songs. We always say: as long as your next album is better than your last one in terms of creativity or whatever, then you’ll be fine no matter what your circumstances are. That’s how this band started, people connecting to the tunes. One more tune, one more tune! As long as we continue doing that “one more tune” stuff, I think we’ll be fine.

What’s the scene like back home in New Jersey?
Horrible. For me, personally, I didn’t go to shows and I wasn’t in any bands. I guess there was a folk rock/coffee shop scene going on? You really couldn’t go anywhere in New Jersey without hearing folk rock or whatever else. I come from the suburbs, which are pretty far away. It’s not like the city, where you “hit the club” or go to a bar. I never really felt like I was even part of a scene, let alone that scene existing at all in the first place. Am I missing out on something? I don’t know; I don’t think it exists, though. You’ve gotta make your own scene. One more tune! What advice would you thus have for a band who were in the same position as you when you broke through?
Umm, you just gotta hustle. That’s it.

You’re currently on tour with Gnarwolves. Are there any other new discoveries or bands you’ve enjoyed listening to lately?
The Big Easy! Hmm, Julien Baker too. K Flay is awesome too, as well as Old Dogs and Screaming Females. Screaming Females aren’t really new, though. They’ve been doing it for a while and I think they’re really good.

In the past you’ve also toured with Brand New. What did you take away from a huge experience like that?
Umm, what did we learn? We toured with Brand New in Europe a year ago and then we just toured with them two months ago in the States too. We played with them in London for like 3,000 people, and then we went to Germany and played for 200 people. When we did the US tour it was like 8,000 people. It was an insane experience, because we were just playing arenas. It was different to anything that we’d ever done before. Oh, and the catering was pretty cool. It was good to eat lunch and dinner.

Would you ever strive to be as big as that, or even bigger?
I think we’d just go with the flow. Brand New are the kind of band who never tried to be bigger, they just did what they wanted and it definitely worked out for them. What can we expect from you guys for the rest of the year, and in 2017?
We’ve got this thing called Champagne Jam, it’s a show that we do every year at the Webster Hall in Manhattan. We take over all three floors and pick all the bands, so it’s basically just a whole big festival. It takes place on December 18 [note: this was yesterday] and it’s already sold out. We are the original. You have to write that.

I will. I never leave things out.
Oh god! So yeah, that’s on the 18th. In the New Year we go out to Australia, so that will be a nice tour. We went out there once with The Smith Street Band, legends. They took us over there and we had the opportunity to play a sold-out tour with them. Apologies, I Have None were also on that tour and it was the first time that we met those guys. They’re not playing tonight, but they’ve been on this tour with us. I guess that’s a scene that we’re part of? Not in New Jersey per se, but more a group of bands. After Australia we’re gonna try and write a new album and just live life so that inspiration can, I don’t know, happen?

Needy When I’m Needy is out now.