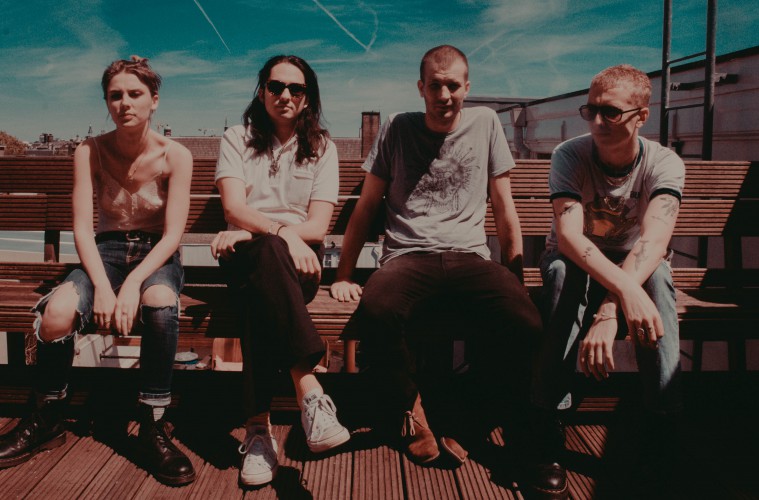 Questions and Answers With: Wolf Alice

When North London quartet Wolf Alice first emerged towards the tail-end of 2013, critics and fans alike had created such high expectations for them that it was only inevitable that Ellie Rowsell and co. would be massive. Not even eighteen months later, with sets at Best Kept Secret and Glastonbury in the bag, the outfit put out a (nearly) chart-topping debut album in the form of My Love is Cool, following it up this month with the ethereal Visions of a Life. We caught up with guitarist Joff Oddie and drummer Joel Amey on a sunny rooftop in the centre of Amsterdam to discuss the record, their journey since My Love Is Cool and how they’ll surpass the hype of their debut.

Hey guys. How are you doing?
Joff: Good man, it’s such lovely weather today! This isn’t a normal day, haha.

You announced your new record Visions of a Life recently. Could you outline for me the transitional period following on from the end of My Love is Cool?
Joel: We had our last show of the My Love is Cool run in September or October last year, and after that we went into a basement at our management’s office. We just put Logic on a laptop, and that was really the start of Visions of a Life.

Joff: There’s only really a handful of songs on the record that were initially written between the end of touring and starting on the record. The logistics of being on tour meant that we couldn’t really see through our ideas till the end of where they should be, you know? A lot of the songs were like diary entries, really. After we finished touring, we were able to go back and look at these songs so that we could think of them with some kind of perspective. We were able to intellectualize them a little bit more, I think.

You mention diary entries. Could you suggest that these songs come from a more personal place as opposed to My Love is Cool?
Joel: I think this is more a question for Ellie, but you can definitely hear bits on this record where you’re able to pinpoint exactly what she’s talking about at a particular moment in time. Some of the songs also just transcend this and go beyond her or me, or you. There are a few things on the record which Ellie writes about that also resonate with us. I could be listening to a song and suddenly say to myself, “whoah, this is exactly the same thing I felt back then”. Even though it’s more personal to her, there are definitely a lot of moments on the record which all of us can relate to.

Musically, Visions of a Life is much darker than its predecessor.
Joff: You reckon?

Yeah, the songs are bigger, you’ve matured and the overall sound is just far darker and less youthful than on My Love is Cool. Was this a conscious approach?
Joel: I know what you mean, yeah.

Joff: I think it depends on the song, to be honest. The music is honestly just a reflection of the songwriting and of where we were at that point in time. We had a higher proportion of darker material back then, and that’s something we had to reflect musically. I don’t think it was a conscious decision, though. Do you think the ‘fucked up’ state of the world right now also had much impact on the way you approached the record?
Joff: Yeah. I mean, to an extent that is debatable though. I don’t think you can be not-affected by the state of the world, as it’s really been a messed up couple of years.

You worked with Justin Meldal-Johnson on this record. What did he bring to the table from a production point of view?
Joff: Justin is just on a different fucking playing field when it comes to musicality. He knows all about the perfect pitch, what works and what doesn’t. There’s no room for slacking, and you don’t want to seem like the member of the band who comes across like a deadweight. After pre-production, we worked with him and realized he was one of the best session players in the world; he’s a fantastic bass player. He knows his shit, so if he says you’re slowing down then you really are slowing down. If he says you’re a bit pitchy, then you’re a bit pitchy.

Joel: He does it in the most creative way. I vividly remember recording the drums for Sad Boy together with Theo, and we did the song on a different timeline to Joff and Ellie. We were doing it all together before, but we also had some other stuff going on in a different room. I couldn’t get Sad Boy for like a day, even though I’d been rehearsing it for so long. When Justin started talking to me about it, it just really helped. With a different person, that could have really slowed things down. The next day, I was so much happier with the song and I’d become a super creative force all the time.

Do you think he also helped you evolve as musicians and individuals?
Joff: Oh yeah, massively! I mean, the process was so democratic with Justin. It was almost like he was another member of the band, and at no point did it feel like his opinion was above anyone else’s.

Joel: He’d be like, “here’s the desk, this is what it does, have a go and try and show me what you can do with it!” We were very hands-on all the time.

Would you work with him again?
Joel: Definitely. We’d work with the whole team again; Carlos was a fantastic engineer, too. He has a home studio where we recorded the album. Mike was a lot of fun to work with too in the B-room. He helped a bit with experimenting and stuff. He could be really quiet at one point and make us wonder if what we did was shit, but then he’d only give you a one sentence response to say what he thought of it. We were surrounded by so many creative people.

Did you feel under much pressure to surpass the hype and critical acclaim of My Love is Cool?
Joel: Yeah! My Love is Cool didn’t even come out of the blue, it came after like three years of hype and anticipation building up. Back then, there was probably more pressure to get it right than there is now. Like, people were wondering if our debut would flop after the first singles and EPs. They were waiting to rip into Wolf Alice because we were getting big off of our first tracks. Now, it’s different. If people supported you on your debut then you wouldn’t want to disappoint them, but you also have to do it for yourself. We as a group had to be happy with it, first and foremost.

With that in mind, on My Love is Cool you had almost three years of time to work and record. Now, you’ve gone straight into another record. How did you deal with that constant buzz going from the stage straight into the studio?
Joel: If we’d have gone away for another three years, then that would’ve just been the end of it. We had so many songs, and we had a Dropbox folder where everyone could just chuck ideas into. We just went straight into rehearsals after we got off the road.

Joff: This could be a very boring answer, but because you have such little time to record a second album, you tend to just take control and make the best possible use of the time you have. It’s just a case of diligence, really.

Was there a lot of music that didn’t make the cut?
Joff: Oh yes, loads!

How much did you throw away?
Joel: There’s Dropbox folders full of music we didn’t use. I’m sure that most bands have this, but in each individual folder we just have lots of different things which we initially thought were sick but just never got round to. There would be a riff which you personally love, but that the rest of the band just didn’t think would fit into the album as a whole. It’d just end up becoming something completely different, and then it just became a process of figuring out what everyone thought and if we could physically pull it off. We recorded 17 songs and then whittled it down.

And how do you plan on translating this record to the live stage?
Joff: Really well! Haha.

Joel: We just announced a big tour actually, including a Dutch show!

Yeah, at the Melkweg! It’s just behind us, actually.
Joff: Oh really, that thing there? How big is it? Nope, it’s just as big!
Joff: We had such a lovely show at the Paradiso.

Joel: Yeah, we did a show there for London Calling Festival. After that we headlined it once, too! We also did the Bitterzoet, which was so much fun. It was that really cool place where you could smoke upstairs; that was banging!

You’re also skipping the summer festival season completely, I noticed.
Joff: Yeah, we’ve basically just taken the whole year off to be honest. There’s a lot of compromise which comes with releasing a record right at the end of the festival season. We just wanted to be in complete control of how we’d come back.

Joel: We start the album tour in America, and then return to Europe in November.

Thanks a lot for your time guys!
Joel: No worries mate, cheers!

Visions of a Life comes out this week Friday, 29 September. Catch the band at the Melkweg in Amsterdam on Friday, 3 November. Get your tickets here.